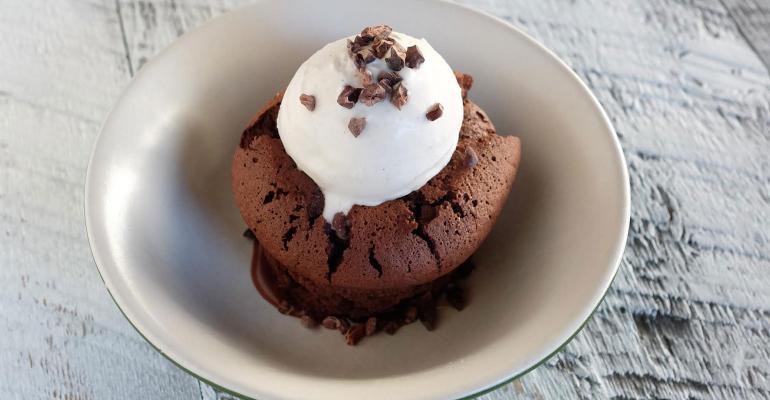 Tremendously popular and widely consumed, chocolate is an essential ingredient on any respectable dessert menu.

But with almost all restaurants offering at least one chocolate dessert at any given time, chefs are getting creative by applying innovative, on-trend tweaks to classics.

To spice it up, he serves a Mexican chocolate brownie spiked with ancho chile and cinnamon, served with dulce de leche ice cream, hot fudge, candied pepitas and whipped cream. On the menu since the restaurant opened in 2014, the south-of-the-border-inspired brownie is among the restaurant’s top-selling desserts.

“Adding a little spice to the dish just seemed natural, especially this close to the border,” Hills said. “The Blackberry Crush Chocolate Fondue was inspired by the iconic molten lava cake, which has a dense chocolate cake filled with an irresistible molten chocolate center,” chef Jason Miller said. “The Melting Pot is already known for having the most decadent melted chocolate around, so in creating this dessert, I thought, why can’t I turn that dessert inside out?”

Added to the 125-unit chain’s menu in September, the new dessert features a dense chocolate genoise cake infused with Merlot that seals the top of a pot filled with blackberry-chocolate fondue. The dessert is finished with berries, a mint sprig, and a dusting of powdered sugar, and is served with fruit for dipping.

The milk chocolate crème brûlée at Urban Farmer in Philadelphia makes for a classic modern dessert with the addition of a winter citrus salad of cara cara and blood oranges.

“It sort of adds an unusual sweetness and is really refreshing,” said pastry chef George Fritzche of the citrus salad. “[It] takes a little of the ‘burnt’ brûlée sugar away without adding bitterness.”

Meanwhile, some chefs aren’t adding ingredients to their chocolate desserts, but rather taking one out: Gluten.

At 16-unit Phoenix-based True Food Kitchen, where chocolate is part of the anti-inflammatory food pyramid, the dessert menu includes a flourless chocolate cake served with a side of warm caramel sauce and cocoa nibs, topped with a scoop of dairy-free vanilla “ice cream” made with coconut cream and rice milk.

“While chocolate is naturally gluten free, desserts — more often than not — tend to have gluten in the recipe,” said Taylor Domet, True Food Kitchen’s director of culinary standards. “So for most guests who are gluten-free, chocolate isn’t something they are used to freely enjoying. We like to think this dessert provides all guests with a decadent chocolate option, but it especially speaks to the GF [gluten-free] community.” At Departure, a pan-Asian restaurant in Denver, pastry chef Erin Koroll offers an entire menu of gluten- and dairy-free desserts, including a dark chocolate brownie cake.

“It is fun to take iconic comfort desserts and flip them around a bit to fit,” Koroll said. “It's a win-win: The pastry team is doing something out of the ordinary, making it craveable, and guests limited by their dietary needs are able to enjoy an amazing dessert experience.”

To make the brownie gluten-free, Koroll replaces flour entirely with Valrhona cocoa powder. For a savory crunch, she bakes chile-spiced peanut brittle into the brownie, then adds banana ice cream — a combination of modified crème Anglaise made with coconut cream instead of milk, and banana purée — miso caramel and togarashi meringue to balance out the rich chocolate flavor with “a spicy, savory and umami effect.”

It’s a simple recipe, Koroll said, but it produces a brownie that can rival a standard take.

Inset photos courtesy of The Melting Pot and Departure