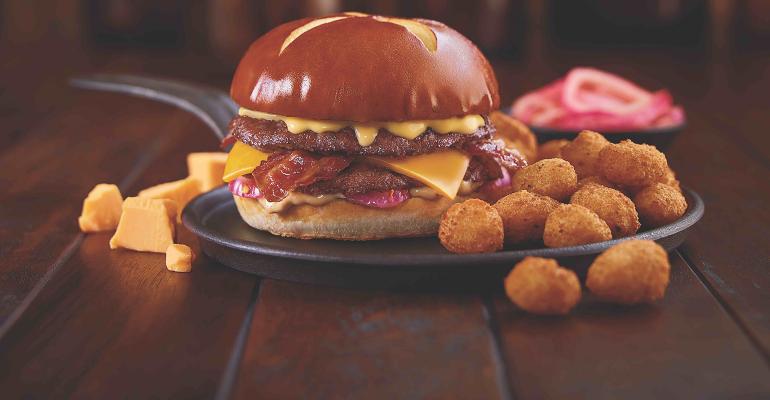 Americans eat a lot of burgers.

The past year has seen a wide array of new burger offerings and upgrades. For instance, McDonald’s — which traditionally shipped and stored burger meat frozen — switched to never-frozen beef nationwide for its quarter-pound patties, a process that’s currently underway. The patties are used in McDonald’s Quarter Pounders and Signature Crafted Recipe burgers. Oak Brook, Ill.-based McDonald’s announced the shift last year, after customers in the test markets of Dallas and Tulsa, Okla., said the fresh-meat burgers were hotter and juicier, with 90-percent customer satisfaction and 90-percent intent to repurchase.

In March, McDonald’s said it had introduced fresh beef, cooked to order, at around 3,500 of its nearly 27,000 U.S. restaurants, and said the process would be finalized at participating restaurants nationwide by early May.

“While our beef patties have always been made with 100-percent pure beef with no fillers, additives or preservatives, we wanted to do more to bring our customers a hotter, juicier, quarter-pound burger,” a McDonald’s spokesperson told NRN via e-mail.

The process involved McDonald’s “most robust training program ever,” the spokesperson said, including new packaging for the patties, new trays, containers and other small wares for handling the beef and ensuring food safety, and new refrigerators with compressors designed to maintain proper temperatures.

Smaller patties, including those used in regular hamburgers and Big Macs, are still shipped and stored frozen. As for smaller patties getting fresh beef, “Time will tell — we always try and let our customers be our guide,” the spokesperson said.

In addition to rolling out fresh beef, McDonald’s is also innovating with new burger flavors. In April, the chain will add a new Garlic White Cheddar Signature Crafted Recipe (pictured above), available on a quarter-pound burger or chicken. The sandwich features garlic aioli, crispy garlic chips and white cheddar cheese, priced at an average $4.99.

“We will continue to test different ingredient combinations inspired by our customers and look forward to revealing what flavor-combinations are coming next,” the spokesperson said.

Premium burgers are often used as a way for chains to test new ideas. Quinn Adkins, director of menu development for 654-unit Culver’s, does just that with the chain’s Pub Burgers. The Wisconsin Big Cheese Pub Burger (left), introduced last July as a limited-time offer, included two beef patties topped with cheddar, American and Havarti cheeses with garlic mayonnaise. It was priced around $5.49.

“We kind of introduced the world to Havarti,” Adkins said of the creamy, semi-soft cow’s milk cheese.

Such offerings “showcase what the burger category can be for our guests.”

“The Pub Burger is primarily a new news vehicle,” he said, adding that the burgers can boost sales, but don’t usually comprise a significant percentage of overall orders — generally around 4 percent of sales.

Developing the burgers is also an “exploratory exercise” to see how customers respond to trending ingredients, “using that to dip our toe in the pool so to speak,” Adkins said. “How does a ciabatta bun work for us? Or doing Havarti cheese for the very first time? We can use the Pub Burger platform as a low-risk laboratory for potential permanent menu items in the future.”

A few months after Culver’s, Jack in the Box introduced a burger with Havarti cheese as part of a promotion of limited-time rib-eye burgers. Although the offer focused on a premium patty made from 100-percent rib-eye, one of the builds featured Havarti, red wine glaze and grilled onion. The burger was priced between $5.50 and $6.50, depending on the market.

Culver’s next premium burger, scheduled to roll out in April, is the Pretzel House, which will have a recommended price of $5.99. Although pretzel burgers “had their big splash between 2012 and 2014, candidly, I felt like a lot of the ones that were being rolled out were not the greatest quality and were kind of pretzel in name only,” Adkins said.

Prairie du Sac, Wis.-based Culver’s is using pretzel buns from Pretzilla in Milwaukee, which will be filled with two burger patties, red onions pickled in-house, two slices of bacon, Wisconsin cheddar and a Wisconsin cheddar cheese sauce that Culver’s rolled out in November, along with “tangy bistro sauce,” a mayonnaise base with horseradish and Dijon mustard.

“It was a great place for us to play around culinarily,” he said, trying “eclectic and funky flavors.”

This year, Walk-On’s has reduced the frequency and extended the length of its burger offers to get better market analysis — it’s hard to see if customers order a special burger more than once if you only give them a month to do so — and to ease operational challenges as the chain seeks to grow more rapidly. Walk-On’s plans to nearly double in size, to 34 locations, by the end of the year, Turner said. The chain had 25 burgers-of-the-month in a row, from a Red White and Que Burger last July — topped with pulled barbecue chicken, spicy coleslaw, pepper Jack cheese and fried pickles on a toasted brioche bun for $11.99 — to The Blitzen (left), a tongue-in-cheek Christmastime offering featuring a 50/50 blend of venison and beef topped with bacon, green apples, feta, peppadew peppers, ghost pepper cheese, spinach and pepper jelly vinaigrette on brioche for $13.99.

“It was a way to stay in our lane, but push the limit a little bit,” Turner said.

As a result, the burger specials provided a better understanding of where the culinary team wanted to go with the menu — and where customers would let them go.

For example, an ahi tuna burger with caramelized onions, Swiss cheese and oven-roasted tomatoes for $13.99 proved not to be particularly popular with customers, while a burger with fried green tomatoes, pimento cheese, smoked bacon, Thousand Island dressing and spring mix tossed in pepper jelly vinaigrette, priced at $11.99, was a hit.

“Pimento cheese was something at the time that was kind of hot,” Turner said. “People loved it and took to it.”

Walk-On’s Surf & Turf burger proved to be such a hit that it became a permanent menu item. It continues to be so successful that the chain sells more than 100,000 of them each year, Turner said, at an average price of $12.24. The burger consists of a beef patty topped with blackened shrimp, caramelized onions, pickled jalapeño peppers, Monterey Jack cheese, Thousand Island dressing and pickles, served on a brioche bun.

Thousand Island dressing is in demand among burger eaters, according to Doug Koegeboehn, chief marketing officer of Wienerschnitzel, which has about 320 U.S. locations and launched new burgers last year.

The hot dog chain, based in Newport Beach, Calif., has served hamburgers since 1976, “but I thought our burger was subpar,” Koegeboehn said, “and if we’re going to have fantastic food across our menu, our burgers have to be great, too.”

A previous burger was topped with ketchup, mustard and mayonnaise, but Wienerschnitzel’s consumer research found demand for Thousand Island dressing, which can also be found at burger chains such as Culver’s and In-N-Out Burger, and that is arguably not very different from McDonald’s Special Sauce. Wienerschnitzel’s new Classic Burger (left), starting at $2.69, is topped with Thousand Island dressing, as well as lettuce, tomato, diced onions and pickles. The patty is larger — almost a quarter pound, Koegeboehn said, and the toasted bun has garlic-butter spread.

The chain’s other burgers, priced around the same, speak to additional burger trends. The Blazin’ Bacon Guacamole Burger comes with bacon and guacamole, along with hot sauce, tapping into growing demand for spicy food. The BBQ Bacon Cheeseburger taps into continuing demand for barbecue sauce, and also includes American cheese, grilled onion and bacon.

But Wienerschnitzel’s best-selling burger by far is the Chili Cheeseburger, topped with American cheese and the chain’s signature chili.

The chain raised the burgers’ prices when it introduced the larger, improved burgers, “and we’re actually selling more than we ever did,” Koegeboehn said.