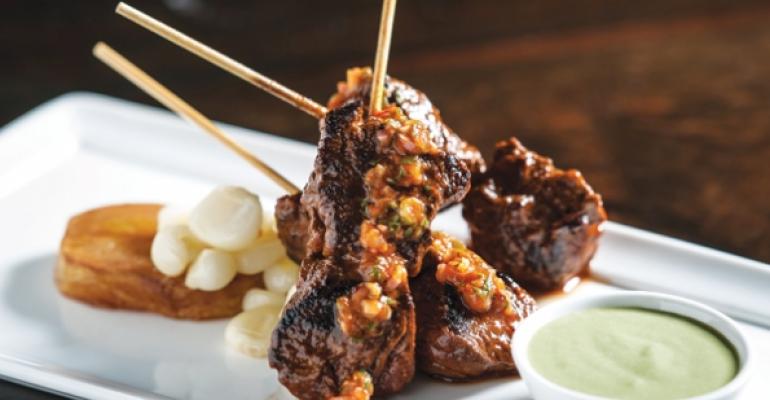 The multicultural influences and on-trend ingredients of Peruvian food have it set for growth with American consumers.

Bold flavors, ancient grains, a repertoire ranging from raw fish to roasted meats, and endorsements by several top chefs all are working to make Peru one of the next big culinary destinations.

“The media spotlight has definitely bolstered diner education,” Boyle said. “Today, many diners are coming into the restaurant with a craving for ceviches and tiraditos.”

Ceviche, the citrus-cured seafood preparation, is made throughout much of Latin America, but the Peruvian variety is distinguished by the nearly obligatory addition of slivered local chiles, or aji.

Tiraditos are a Peruvian interpretation of sashimi.

Peruvians have had about a century to study sashimi and other Japanese dishes, according to Doris Rodriguez de Platt, owner of Andina restaurant in Portland, Ore., and a native of Cajamarca in northern Peru. She said Japanese immigrants began to arrive in Peru around 1910 to work on building the country’s railroad.

“They came and they liked it, and they stayed and called their families over,” she said.

The Japanese were preceded by the Chinese, who were brought in as indentured servants to work on the coastal cotton and sugar plantations after the liberation of the African slaves, who originally were brought by the Spanish for that purpose.

Those four cultures, together with local indigenous people — the Incas and their predecessors — who cultivated a wide variety of potatoes, corn, quinoa and aji, all contributed to the creation of modern Peruvian cuisine.

From the Africans came tacu tacu, fried cakes of rice and beans, as well as anticuchos, which are skewers of beef heart.

Rodriguez de Platt and her staff prepare anticuchos by thinly slicing beef heart and marinating it overnight in a purée of aji panca — a sun-dried red chile that some chefs compare to an ancho — garlic, cumin, oregano, salt and vinegar. The heart is then skewered, quickly grilled while brushing it with the marinade, and served with fried yucca and a sauce made with a spicy red chile called aji rocoto along with local fresh Fresno chiles — a nod to Oregon’s agricultural bounty — topped with chopped scallions.

Anticuchos are traditionally prepared with beef or veal heart, but are made in the United States with just about any protein.

At La Mar, an eight-unit chain based in Lima that has locations in San Francisco and New York, octopus, beef and chicken also are made into anticuchos, said Diego Vega, an executive operator from Lima.

At Raymi, Richard Sandoval’s Peruvian restaurant in New York, chef Erik Ramirez offers both hanger-steak and prawn anticuchos, although he plans to replace the steak with heart and gauge how his customers respond to it.

Anthony Lamas, the chef of Seviche, a pan-Latin restaurant in Louisville, Ky., prepares them with chicken liver and tri-tip steak, a triangular cut from the bottom sirloin popular in Southern California, where Lamas is from. He plates the anticuchos with choclo, a Peruvian corn with giant kernels.

He also prepares a variation of a Chinese-Peruvian dish called saltado. The word literally means “jumping,” and the dish is so named because it is cooked in a wok. Lamas begins by marinating a tri-tip  steak overnight with aji rocoto, garlic, red-wine vinegar, lime juice and olive oil. The steak is cold smoked for about half an hour, sliced and finished on the grill. Meanwhile, he mixes pan-fried French fries, or papas fritas, in a wok with bell peppers and poblanos. He then adds white pepper, kosher salt and oregano, arranges the vegetables on a plate and tops them with the tri-tip steak.

Criolla, or creole, is the urban culture of Lima, where multiple culinary traditions meet, said Ramirez, who grew up in the New York area but whose parents are Peruvian. His saltado is made with hanger steak, which he sears in the wok and then removes. He then mixes cherry tomatoes, red onions and cilantro in the wok, and adds the meat back in.

“Then we catch it on fire and add the sauce to it,” he said.

The sauce is made with soy sauce, veal jus, oyster sauce and vinegar. It’s finished with cilantro and served in a bowl topped with papas fritas.

“Peruvian food is very rich and robust in flavor,” Ramirez said, adding that at Raymi they tend to tone it down a bit. “We want it to be balanced and not overwhelming for certain palates,” he said.

Lamas of Seviche, however, said he is in love with Peruvian chiles. He uses aji amarillo, the yellow chile that’s probably the most widespread of Peruvian peppers in the United States, for his wahoo tiradito. He slices the fish thinly, dresses it with the aji, puréed with ginger and soy sauce, and tops it with celery and apple.

“Tiraditos are a fun way to do sashimi,” he said. “It has different flavors, and people get really excited about that.”

Leche de tigre, which literally means “tiger’s milk,” is the basic dressing for Peruvian ceviches and tiraditos. At its most basic it includes citrus juice, a spicy red chile called aji limo and perhaps a little fish juice or stock.

Ramirez’s version at Raymi also has ginger, celery, onion and garlic, which is puréed with ice, fish fumet and pieces of fish, and then strained. It is poured over a fluke tiradito with persimmon, a Japanese citrus fruit called sudachi, radish and sesame seeds.

Lamas dresses Seviche’s tiraditos with lemon, lime, cilantro and chile. For ceviche, the most widespread Peruvian preparation in the United States — in part due to its simplicity and in part because it is also Mexican — Lamas serves the fish in lettuce cups with a side of sweet potatoes and julienne red onion.

“It all makes sense when it comes together,” he said.

Castro also makes a pappardelle served with a cream sauce flavored with saffron and aji amarillo, and topped with grilled chicken, shrimp or fish.

Although that’s not a traditional preparation, Ramos said it reflects the Chinese and Spanish influences of Peruvian cuisine.

“Peru is an emporium of crops, fish, seafood and all kinds of animals that live in the Andes,” she said. But Oregon also has a bounty of natural products and a cosmopolitan culture. As a result, she makes a seasonal quinoto — which is like risotto, but prepared with the Andean grain quinoa — that contains mushrooms in the fall and asparagus in the spring.

She also uses venison for her version of rocoto relleno, made with aji rocotos, which are similar to the poblano peppers used in Mexico and the American Southwest to make chiles rellenos. Peruvians often stuff them with ground beef cooked with a sofrito of aji panca, garlic, onion and oregano, along with a little vinegar. Rodriguez de Platt’s version is made with venison cooked with sofrito, verjus instead of sugar, local cabbage mixed with a sauce of aji amarillo and garlic, and some Parmesan cheese on top.

Because the tropical climate doesn’t vary as much as in temperate zones, “we don’t have seasonal products in Peru — we have all-year-round products,” Rodriguez de Platt said. But she said she wants to pay respect to and celebrate local Oregon produce.

“It’s a marriage of the techniques and the aji of Peru, and the seasonal bounty of Oregon,” she added, noting that when she opened Andina a decade ago she worried she might have to adapt to American tastes.

“But we stuck to our guns,” she said. “Our goal is not to Americanize the food of Peru, but to Peruvianize the taste of the locals.”