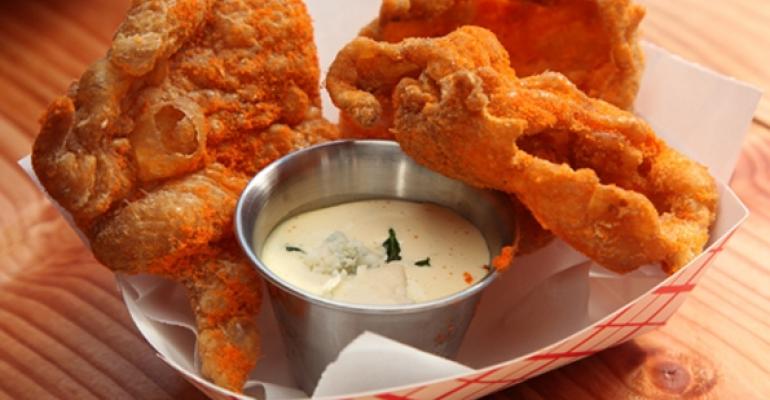 Restaurants like Etch in Nashville and Clio in Boston are using the crispy ingredient in a variety of dishes and cuisines.

In chefs’ continuing search for ingredients that are unusual enough to intrigue their customers, but not weird enough to scare them away, a growing number of them have turned to a crunchy part of America’s favorite edible bird.

“Even talking with my purveyors, chicken skin is just blowing up,” said Douglas Rodrigues, chef de cuisine at Clio, Ken Oringer’s signature fine-dining restaurant in Boston, noting that it had even been written about recently in The New York Times.

Dirk Flanigan, chef of two Chicago restaurants, Henri and The Gage, said “Crispy fat and skin has always been my guilty pleasure, so much so that I have served a Skin Salad, using chicken skin, pork skin, salmon skin and small lettuces with horseradish vinaigrette.”

At Clio, Rodrigues cooks chicken skin on a plancha with a weight on it to keep it flat. Then he uses it instead of bread to make a small sandwich with a filling of goat cheese, chives, onion seeds and cypress seeds that he calls tambouri, and pickled “onion berries,” which is what he calls the bulb that forms on the stems of any member of the onion and garlic family once they stop flowering. He serves that dish as an amuse-bouche. 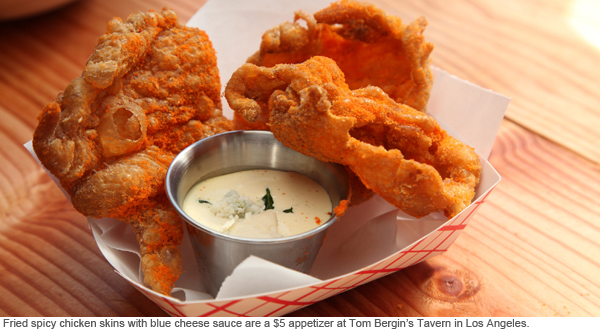 Rodrigues also uses chicken skin as the crunchy component of a beet salad, as a crispy garnish to buttermilk-poached chicken, and in other applications. The skin from the chickens he buys goes on that poached chicken dish. The rest of the skin he buys separately, for around $4 per pound, he said.

Deb Paquette, chef-owner of Etch in Nashville, takes a similar approach, scraping the fat off the skin then laying it on a sheet pan. She seasons it with salt, pepper and fresh thyme and lets it dry out in her walk-in for about 30 minutes. Then she places another sheet pan on top to keep the skin flat and bakes it in the oven for another 30 minutes. 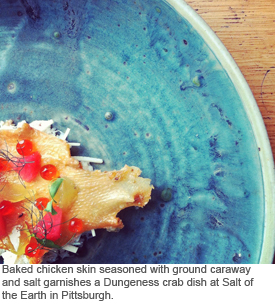 She finishes the chicken skin on the plancha to make sure it’s crispy and serves it on anything ranging from hamburgers to salads to a dish of prawns and scallops with green tomatoes, potatoes, squash, smoked shallot vinaigrette and garlic essence.

She also serves it as an appetizer with a mixture of goat cheese mixed and candied ginger topped with hot chile-plum preserves.

“Everybody loves that crispy, crunchy stuff,” Paquette said. “We have some ladies who come in and ask for them all the time.”

Fried spicy chicken skins are available for $5 per order at Tom Bergin’s Tavern in Los Angeles, where chef Brandon Boudet serves them with blue cheese sauce.

Kevin Sousa, chef of Salt of the Earth restaurant in Pittsburgh, does a sort of surf-and-turf with Dungeness crab and chicken skin. He combines the crab meat with pickled crabapples, grapefruit segments, apples, caraway seeds and chicken skin that he seasons with ground caraway seeds and salt bakes for 15-20 minutes at 350 degrees Fahrenheit between two sheet pans. He garnishes the dish with a couple of pieces of salmon roe and sells it as an $11 starter.

“It’s just a little very, very thin piece of chicken skin that’s nice with the citrus and light flavors of the dish,” he said. “It’s been wildly popular.”

Building on an indulgent tradition 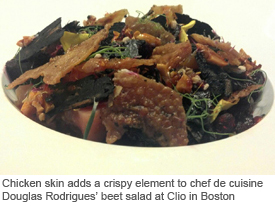 Although chicken skin is trending in many newer restaurants, it has also been a traditional ingredient in cuisines around the world. For example, East European Jews use it for a kosher version of cracklings, pointed out Tony Maws, executive chef of Craigie on Main in Cambridge, Mass.

Chicken skin is also a customary snack in Japan, particularly skewered and grilled, which is what Gene Kato plans to do with it at Sumi Robata Grill, which is slated to open in Chicago in December. For that item, Kato will use skin from the chicken’s backbone, which has some muscle meat attached as well, so that the dish is crisp with added meaty substance, Kato said.

Josh Thomsen, whose restaurant Agricola is slated to open in Princeton, N.J., in January, also uses chicken skin as a crunchy element on dishes, including a chicken and waffle ice cream dessert he made in the past. He recommends gently simmering the skin in water to remove the fat, and then dehydrating it and baking it under a sheet pan to keep it flat. 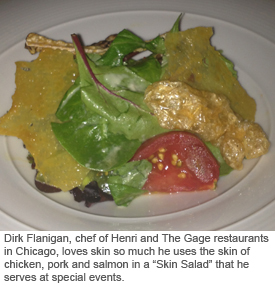 St. Louis restaurateur Gerard Craft uses chicken skin to make an upscale version of Coxinha, a snack his Brazilian nanny made for him when he was growing up.

“Traditionally it’s braised chicken and a Brazilian cream cheese called catupiry with lime juice that’s stuffed in dough that’s then breaded and fried. It’s extremely heavy but extremely tasty. I was trying to capture that in one bite and make it more Midwestern,” he said.

To make the dish he dehydrates the chicken skin then fries it and chops it into breadcrumb-sized pieces and keeps it in his dehydrator until he’s ready to use it. He rolls balls of catupiry in flour, dips them in an egg wash and then breads them in the chicken skin. Then he deep-fries them and serves them on a sorrel aïoli, which adds the acidity that traditionally would be provided by the lime juice.

He serves that item at the beginning of his tasting menu at Niche restaurant, or at the bar for $6 for an order of six.