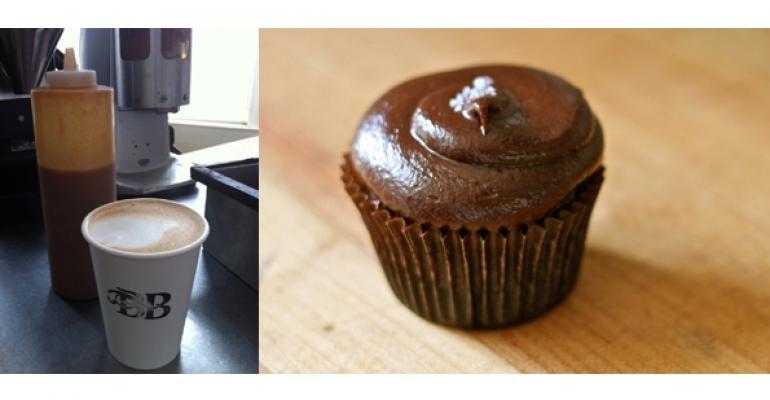 Chefs give caramel a salty bite

Desserts are getting a savory edge as chains and independents alike embrace salted caramel.

When it comes to popular desserts, it’s unlikely that anything will take the place of a straight-up scoop of vanilla ice cream or something simple and chocolaty, but sweets with a savory edge are gaining ground in the United States, as illustrated by the growing prevalence of salted caramel.

“We brought salted caramel into the mix to satisfy guest demand for sweet and savory flavor combinations, and the response has been overwhelming,” 16 Handles founder Solomon Choi said. “Everyone absolutely loves the salty sweet taste, and we are being inundated with requests to keep the flavor on our menu indefinitely.”

The salted caramel frozen yogurt sells for 52 cents an ounce, the same price as its other flavors.

Although some versions of salted caramel can be quite salty, the confection didn’t start that way.

At its simplest, caramel is sugar that’s cooked until it turns a caramel color. Caramel sauces and chewy caramel candies are often enhanced with butter.

That butter was generally unsalted until 1977, when Henri Le Roux, a candy maker from the French region of Brittany, decided to make his caramel candies with traditional Breton butter, which, unlike other French butter, is salted.

The result was both a scandal, as a radical departure from French candy-making tradition, and a sensation that won the award for France’s best candy in 1980.

"Salted caramel offers that ooey gooey, yummy, burnt-sugar-but-salty taste that is always a pleasure to encounter in a dessert," said Amanda Rockman a contestant in Season 2 of "Top Chef, Just Desserts" and executive pastry chef of Balena and The Bristol, both in Chicago. She offers an open-faced caramel banana tart, made with banana milk jam, an almond crust, sweet cream and salted caramel, for $9.

Jai Kendall, pastry chef of 14-unit Rosa Mexicano, an upscale Mexican chain based in New York City, adds sea salt to cajeta, a caramel similar to dulce de leche but made from goat milk instead of cow milk, and makes ice cream out of it.

“The sea salt cajeta has been a real hit this season,” she said. “It’s a great pick for the sweet tooth who can’t handle the richness of chocolate but wants something more robust than a summer fruit flavor.”

The ice cream is $8 for three scoops; flavors can be mixed and matched.

Lori Baker, pastry chef of Baker & Banker in San Francisco, offers both a salted caramel latte, at $4, a sort of salted version of Starbucks’ popular caramel macchiato, and a dark chocolate cake with salted caramel frosting, at $4.50, which Baker said is the restaurant's most popular cake.

Baker said the dessert has a more “adult” flavor than a typical chocolate cake because the salt balances the dish’s sweetness. Additionally, a cupcake filled with salted caramel and topped with dark chocolate frosting sells for $3.50.

Even the ice cream sandwich has been given the salted caramel touch at Presidio Social Club in San Francisco, where pastry chef René Cruz combines ice cream, toasted meringue, salted caramel and honey-roasted peanuts for what is now one of the restaurants most popular desserts. It sells for $8.

Editor's note: This story has been updated with Rosa Mexicano's latest unit count.