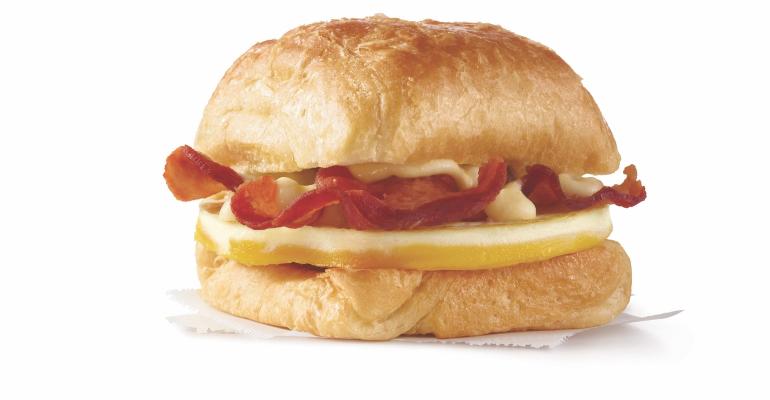 The Wendy's Co.
Wendy's Bacon, Egg & Cheese Croissant is part of the $3 deal that is being offered through Nov. 20.
Data & Research>Top 500 Restaurants

The Wendy’s Co. is promoting its breakfast daypart with a $3 deal through Nov. 20, the company said this week.

The Dublin, Ohio-based burger chain, which debuted breakfast systemwide in 2020, is offering a breakfast croissant sandwich and a small order of seasoned potatoes starting Monday, Oct. 24.

Related: Wendy’s taps into popular culture as it hones brand through innovation

Breakfast sales have been increasing for the brand.

“Our sales volumes continue to reach well above our breakeven mark of just over $2,000 per week, driving profit for the company and our franchisees,” Penegor said. In the first quarter, Penegor said sales were $2,500 per restaurant and, in the second quarter, that inched up to more than $2,700 per restaurant.

The CEO said Wendy’s expected its year-over-year U.S. breakfast sales growth to be about 10% in 2022, reaching average weekly sales of $3,000 by year’s end.

The growth was supported by the launch of new items, such as the French Toast Sticks, in August, he said. “We will also continue to lean into profitable promotions throughout the back half of the year,” Penegor said in the August call.

The company has committed to a $16 million global investment in breakfast advertising this year.

“You're seeing a few more folks either work from home or have the food at the house and then grab the drink on the way to the restaurant or on the way to the office,” Penegor said. “All that said, we're seeing some nice acceleration in our business.”

The $3 Wendy's breakfast deal is available at the restaurants as well as through online orders and on the Wendy's smartphone application.

For the second quarter ended July 3, Wendy’s net income was $48.2 million, or 22 cents a share, down from $65.7 million, or 29 cents a share, in the same period last year. The decrease in net income included higher interest expense as a result of the company's debt raise completed in the first quarter 2022. Wendy’s revenues rose to $537.8 million from $493.3 million in the prior-year quarter.