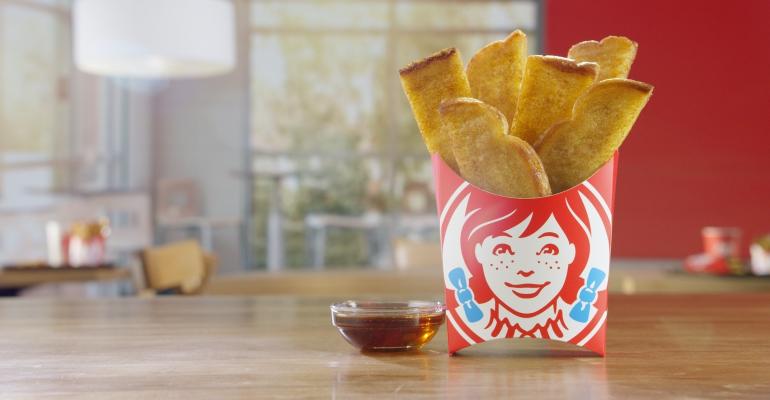 The Wendy’s Co. plans to sweeten its breakfast menu Aug. 15 with the addition of Homestyle French Toast Sticks, the company announced Tuesday.

The Dublin, Ohio-based burger brand, which launch the breakfast daypart in 2020, had been testing items to balance the savory side of its offerings, said John Li, Wendy’s vice president of culinary innovation.

The French Toast Sticks will be offered a la carte at a suggested price of $2.79 for four pieces and $3.99 for six pieces. A six-piece combo with seasoned potatoes and a beverage will be offered for $6.19. Prices may vary by location.

Customers can pair the toast sticks with a new 1.5-ounce maple syrup dip.

Li said the initial savory items put the Wendy’s breakfast offerings “on the map,” but the company had always wanted to add a sweet component.

“The timing worked out where we're getting post-pandemic and consumers are starting to flow back into a normal behavior and a breakfast routine, Li said, indicating a “specific need for someone that wants something sweet.”

Breakfast sales were challenge in 2020 and 2021 by pandemic disruptions in offices and schools.

Wendy’s president and CEO, Todd Penegor, said in a first-quarter earnings call in May that “we believe that these are short-term headwinds and our performance relative to the industry gives us confidence in our ability to hit the low end of our goals to grow breakfast sales by 10% to 20% for the full year and reach average weekly U.S. breakfast sales of approximately $3,000 to $3,500 per restaurant by year-end.”

The company this past spring officially launched breakfast in its Canadian restaurants.

Li said they “leaned into the past” to create the French Toast Sticks, not getting “too chef-y.”

Wendy’s uses Texas Toast that is dipped in egg, dairy, sugar and vanilla, griddled and then flash fried for exterior crispness, he said.

“It took us about 18 different tries to get us to now,” he said. “We had enough testing under our belt to say consumers were saying, ‘Yeah, this is exactly what I remember in eating French toast when my mom would make it for me.’ ….  Consumers are pretty excited because it harkens back to the memories.”