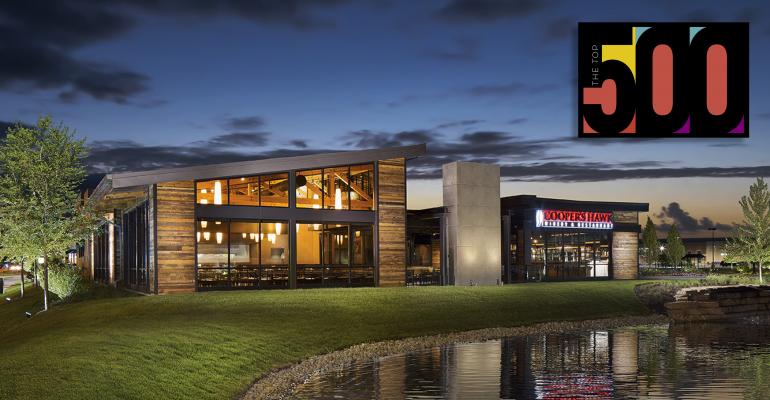 The casual-dining restaurant chain has revenue streams including a wine club, event spaces

Long before the pandemic, Cooper’s Hawk Winery & Restaurants began positioning itself as a lifestyle brand with multiple revenue streams.

The full-service restaurant and wine bar is also part wine maker. The brand has a wine club with more than half a million members, who have access to monthly wine dinners and group trips to travel to wine-making regions of the world. One downtown Chicago location serves as a fully immersive “world of wine,” with a vast collection and multiple event spaces.

That diversification built around a loyal fan base was a driving factor for Cooper’s Hawk’s success through 2020, when the Downer’s Grove, Ill.-based chain recorded sales of $385.4 million, up 12.5%, according to Datassential’s data for the Top 500 report. It was one of few full-service brands to end the year with positive metrics.

Founder and CEO Tim McEnery said the chain was forced to pivot during the pandemic, like most restaurants across the country.

“Our operators became good at opening and closing the restaurants, so it was great for me that they were handling that aspect of the business so I could help navigate a way out of it for us,” he said.

About six months into the pandemic, he said the company made some big decisions. “We were going to grab ahold of our future,” said McEnery. “We started investing in talent, technology, digital, data warehousing — really everything that would help Cooper’s Hawk live up to its potential over these next few years.”

Unlike a lot of restaurant brands in 2019, however, Cooper’s Hawk hadn’t really started testing the waters for off-premises service. Cooper’s Hawk was all about the dine-in experience. Still, forced by necessity, the company figured it out in a hurry.

“We had the whole delivery playbook up on the shelves, and we said one day we’ll do that when we need to,” he said. “Pre-COVID, [we thought] doing delivery was going to take us about nine months to launch. And then once COVID hit, we figured out how to do it in about four business days.”

McEnery credits the brand’s success to two things: a culture that remains alive and well, despite the challenges of the past year, and the wine club, which has an incredibly loyal following.

Even in the early months of the shutdown, McEnery said he was surprised to see the wine club membership grow.

Now the company is hoping to tap more into that engagement and loyalty by expanding Cooper’s Hawk’s travel services.

Wine club members have long been able to take group trips together to wine-making regions, from Argentina to California’s Napa Valley. McEnery this year plans to expand on that perk by offering individual trips curated by the Cooper’s Hawk team, so that travelers don’t have to wait for a group event.

In addition, McEnery is planning to further diversify Cooper’s Hawk’s revenue by adding a new brand. Though not ready to disclose details, McEnery said he had discovered an incredible pizza concept while traveling in Italy. In partnership with the family that operates the brand in Rome, McEnery plans to bring the concept to the Chicago area in 2022 and grow the brand in the U.S.

“We found one of the greatest restaurants in all of Italy,” he said. “It’s a true partnership with a restaurant run by a ‘dynasty’ family and it’s going to be awesome.”

Cooper’s Hawk ended 2020 with 47 units, adding six during the year. This year, the chain plans to open another four, with eight more planned for 2022, McEnery said.

Founded in 2005, Cooper’s Hawk in 2019 received an investment from a fund managed by private-equity firm Ares Management Corp.

In 2019, the company opened its Cooper’s Hawk Esquire location in downtown Chicago, which offers a fully immersive “world of wine” experience, with a four-story wine tower and a collection of some 1,600 bottles from around the globe, hand-selected by Master Sommelier Emily Wines. The Gold Coast location is also a hot spot for private events.

“This was our tribute to the world of wine through the lens of Cooper’s Hawk,” said McEnery. “It was about creating a unique experience for wine club members.”

For the core brand, growth going forward will remain focused on reaching locations that will allow Cooper’s Hawk to be the neighborhood restaurant for wine-loving fans.

“We love being … the local neighborhood restaurant that happens to do AUVs of $9.3 million, $9.4 million,” he said.