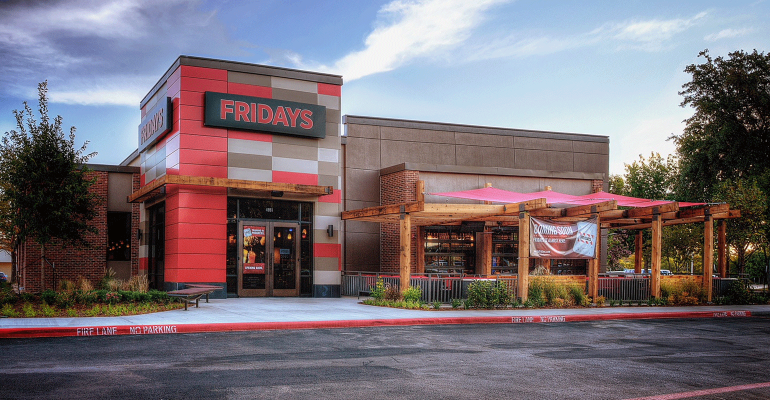 As a result, the brand has doubled its off-premise business

While most casual-dining brands are betting big on customer-facing tablet technology, TGI Fridays is investing in artificial intelligence to harvest data that will drive diner frequency.

Guests of the Dallas-based chain can now use a variety of social media platforms to place an order. From that customer interaction, TGI Fridays is using AI to identify ordering patterns, and that information is used to personalize marketing.

If a guest order ribs through any of the platforms, for example, that data can be used to create future invitations based on that customer’s food preferences, said Sherif Mityas, Fridays chief experience officer. When the chain adds a rib special later on, then TGI Fridays can send its rib-loving guests a text offering them a “first try,” Mityas said. Or, if the customer normally orders food during football season, then Fridays can invite that guest to order before games kick off on a Sunday.
“I’m giving him VIP access with a special relevant message at the right time,” Mityas said.

Fridays began rolling out AI-driven technology last year. It is now available at each of the company’s 450 domestic locations. It has helped improve incremental sales at each restaurant, he said.

“We’ve doubled our off-premise business in last 12 months,” he said. “For us, it’s driving real dollars into the restaurants.”

How does it work?

Besides traditional dine-in transactions, customers can place orders through the chain’s smartphone app or website, as well as one-click ordering on Facebook, through chatbots on Twitter, and by voice command using Amazon’s Alexa.

That ordering information, along with guest tweets and Facebook messages that mention “TGI Fridays,” are then collected and stitched together to create a profile on each customer. “As people give us more information, we’re able to create more engagement and more loyalty and more frequency,” said Mityas, who was recently promoted from chief information officer to chief experience officer.

For the back of the house, Fridays is using similar AI technology to help general managers run more efficient restaurants. AI learns the ebb and flow of each restaurant, giving general managers feedback on everything from inventory to how to manage scheduling.

Consumers benefit because the technology frees up management to interact more with guests.

So what’s next for Fridays?

Mityas said restaurants in its home base of Dallas are experimenting with ordering food and drinks — or at least, reordering —from their phone at the table, rather than using a tablet. With everyone “walking around with a super computer in their hand every day,” Mityas said it doesn’t make sense to pay for an expensive third-party tablet system.

In Dallas, servers start the order at the table, then provide the guest a code that loads the order on their phone through the app.  At that point, guests can re-order drinks, including alcoholic beverages, because the server has already identified them.

“Think of it as a running check,” he said.

Mobile payment has been available at Fridays for about a year. But the ability to re-order drinks without flagging down a server gives diners more control. Mityas said he expects to rollout the reorder technology to most other restaurants by the end of the year.

He said it is part of his mission to bring cutting-edge innovation to the brand.

“We needed to put a different innovative stake in the ground,” Mityas said. “We’re a 50-year-old brand. But we need to act like a 50-year-old startup. We can’t be a sea of sameness.”