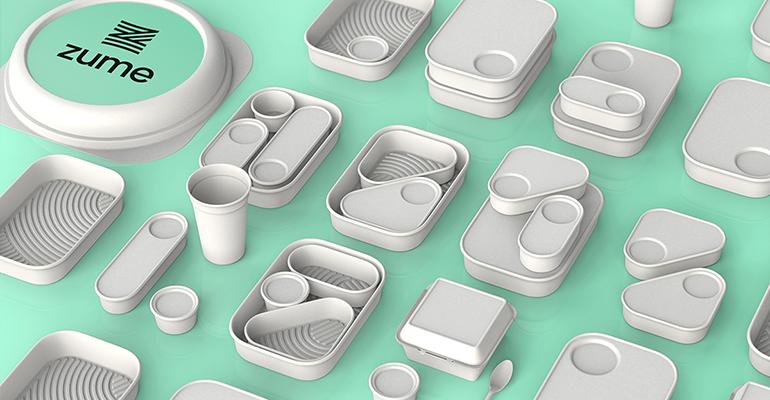 Now named Zume Inc., the Mountain View, Calif.-based company today announced the acquisition of Pivot Packaging, a sustainable products manufacturer. Terms were not disclosed, but the move brings a 70,000-square-foot manufacturing plant in Southern California under the Zume umbrella, the first of several the company plans to build around the U.S.

It also sets the stage for the launch of Zume Packaging, a line of plant-based compostable packaging products made with repurposed agricultural waste, like bagasse (a sugarcane fiber), as well as bamboo, wheat, straw and potentially tomato rinds, citrus peel and other organic materials that otherwise might end up in landfills generating greenhouse gas.

Restaurant delivery is not going away. So for the food industry, a more sustainable future must start with packaging, argued Alex Garden, Zume’s chairman and CEO.

Less than 10% of plastic globally is recycled, and the United Nations estimates that 300 million tons of plastic waste is generated annually. Most of these single-use items end up in landfills, as well as in the world’s waterways and increasingly in our food systems in the form of microplastics — or they are incinerated, creating pollution. As a result, lawmakers and regulators are increasingly looking to ban single-use disposables, pushing the restaurant industry to find alternatives.

While the landscape of compostable packaging available to the industry has grown significantly in recent years it’s generally 50% to 100% more expensive than plastic, Garden said. That higher cost has prevented restaurant operators from embracing composting — though the lack of industrial composting facilities that accept packaging across the country is also to blame. Compostable products require certain conditions found generally only in industrial facilities to properly break down.

Zume’s new line, however, will be positioned at or below the cost of comparable plastic products — though Garden declined to offer specifics on pricing.

It’s a chicken-and-egg scenario, he contended..

Zume believes that if more sustainable options are affordable and perform well, restaurant operators will buy them. And if such products are genuinely good for soil health, there will be wider civic adoption of composting in the U.S. This is already happening in Europe, he noted. 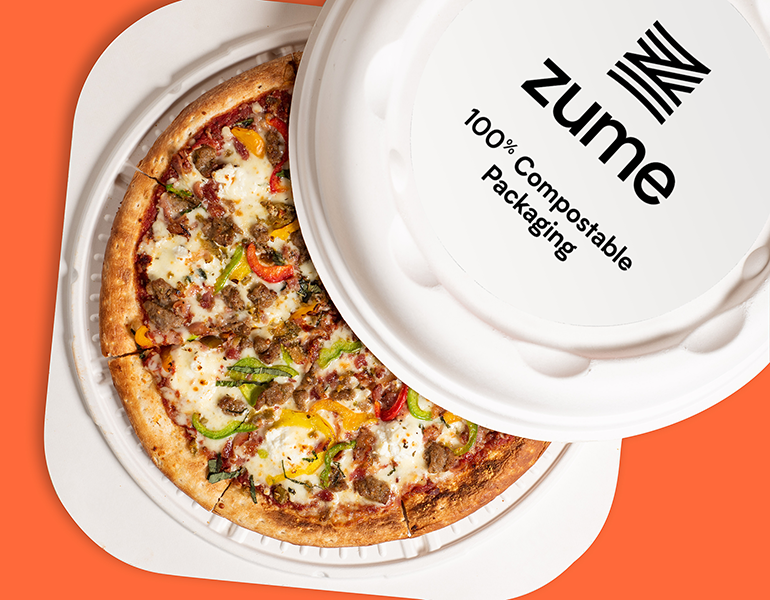 “It’s about taking plastic out of landfills, but it’s also about finding new uses for what are also agricultural waste products,” he said. “The key to unlocking all of this is the new manufacturing technology that we’re bringing online. And that technology allows us to break the price-to-performance paradox.”

For Zume, which has reportedly raised $423 million in venture capital — though Garden declined to comment on those reports — it’s all part of a much bigger picture.

Zume is reinventing itself as an “infrastructure company” that will use technology to “weave a sustainability fabric” of solutions for restaurant operators, Garden said.

That fabric might include everything from a customized and fully automated “clean-idle” food truck that uses data to best determine delivery needs — and now the packaging in which that food arrives at customers’ doors.

“It’s a set of technologies that work together harmoniously,” said Garden.

Zume appears to be borrowing a page from the Eatsa playbook.

Eatsa first launched as a fully automated restaurant concept that captured headlines, but later parlayed that industry experience into licensed technology that other restaurant chains have adopted.

As a restaurant operator, Zume has “earned the right to participate” and understands the needs of the industry, said Garden.

Zume Pizza operates 10 delivery trucks around Silicon Valley, served by a commissary where the pizzas are made by humans. Robots load the pizzas into “smart ovens” on the trucks, and the pizzas are baked on en route to their final destination, where they arrive hot out of the oven.

For that process, Zume developed an award-winning box — they call it a “pod” — made by Pivot Packaging from compostable sugarcane fiber that kept the pizza hot and crisp. The pods are a greener alternative to traditional cardboard pizza boxes, which are often not accepted for recycling because of the remnants of grease and hardened cheese.

“So we saw room for innovation in packaging,” said Garden. “Really, with the technology we have invented, there is no reason to use single-use plastics in food delivery.”

Zume has set a target of replacing at least a billion units of single-use plastic by the end of 2020, and that’s just the beginning, said Garden. “We’re investing to scale our manufacturing infrastructure.”

The company already has several major clients signed on to use its packaging — including a $5 billion food company that Garden declined to identify, deferring that reveal to those clients.

“Sustainability is such an important part of the brand commitment,” he said. “They want to control the message.”