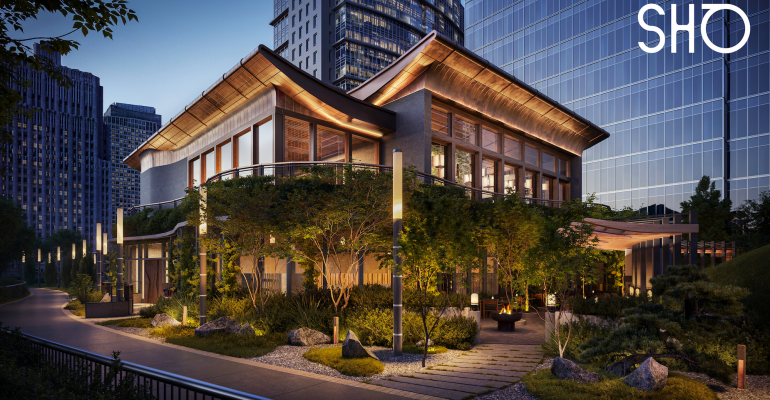 With a team of Silicon Valley investors and chef Shotaro Kamio helming the kitchen, this multilayered project is designed to become a landmark

Another big, splashy NFT-backed restaurant is coming in 2023, this one on the West Coast and led by a group of high-profile tech execs.

Coming in fall 2023 is the new SHŌ, a two-story “culinary entertainment and nightlife experience” on the roof of San Francisco’s Salesforce Transit Center in the 5.4-acre Salesforce Park constructed on top of the transportation hub. Operated under the SHO Group, the venue will include a restaurant and rooftop Sky Lounge, as well as a Japanese food market featuring bento boxes, grab-and-go-salads and more.

There will also be a private membership club with access offered with the purchase of an NFT, similar to the Flyfish Club concept launched in New York City last year. The SHŌ NFT will represent  three tiers offering different levels of access — ranging from priority reservations and courtesy car pickup/dropoff, to exclusive curated trips to Japan. Founding members will also have access to all future SHŌ Group venues and experiences.

San Francisco is just the beginning, said Josh Sigel, CEO of SHŌ Group, in an interview with Nation's Restaurant News.

“SHŌ San Francisco is our flagship, but we are very focused on building this brand,” he said. The group is already looking at additional locations, not only expanding the fine dining concept, but also perhaps the Japanese market aspect.

Sigel was previously founder and CEO of Silicon Valley consulting firm Lasso Ventures, and was chief operating officer of “eating technology” company Innit, according to his LinkedIn profile. Earlier in his career, he was chief information officer for Natural Markets Food Group, and, before that, worked with United Natural Foods, where he worked with distribution to restaurants and retail.

Helming the kitchen will be chef Shotaro "Sho" Kamio, who is known for the Berkeley, Calif., restaurant Iyasare. The menu at SHŌ will showcase irori cuisine, described as a rustic farmhouse Japanese tradition little known in the U.S. The kitchen will have a 40-square-foot fireplace using only charcoal and kindling for cooking.

Kamio said his food and cooking concept involves the balance of fire and water, saying it rains six months out of the year in Japan. Irori cooking refers to grilling, but also smoking and dehydrating, or dry aging, so the restaurant will be equipped with dry-aging rooms and ingredients might be hung over the fire, for example, to draw out the umami flavors.

Also on offer will be sushi created by Masaki Sasaki, once known for the now-closed restaurant Sasaki in San Francisco, as well as tapas and other small dishes.

Kamio said the restaurant will offer a number of price points, from the exclusive omakase room, which might range in price from $250 to $300 for a multicourse meal, to a more approachable kaiseki menu ranging from $90-$120.

Then the Skylounge will be even more casual, with San Francisco-style sushi —not necessarily what you'd find in Japan, he noted — and there will be quick takeout and to-go options from the lounge and market.

The concept is being designed by AvroKO and sister studio Brand Bureau, which has developed a pretty spectacular video rendering.

Details on the NFT sale, on the Ethereum blockchain, are coming later this month. A launch party at Salesforce Park is planned for pre-sale members, and the public sale will follow.

SHŌ is one of a growing number of restaurant concepts being developed with the sale of NFTs as a fundraising tool, as well as serving as an access pass that has resale potential (in theory)  — and serves as a loyalty club, building a community to help support the project from a marketing standpoint.

But Sigel said funding for the restaurant is not dependent on the NFT sale, though it will help offset initial costs.

There’s a deep bench of investors joining Salesforce in the project, including an all-star Silicon Valley lineup: Erica and Jeff Lawson (CEO of Twilio); Craig Ramsey (founder of Vlocity); Dan Springer (CEO of DocuSign); and Drew Houston (CEO of DropBox). Sigel said the group is still in the process of fielding investor interest, and the group’s banking partner is providing additional support.

“This is not a scheme to leverage NFTs to fundraise,” Sigel said.

“Pushback is expected," he added. "People will say ‘you’re trying to ride the wave, it’s gimmicky or in-style — but that’s not really the case.”

He said SHŌ will more likely appeal to people who work in venture capital, real estate or law — people who are not crypto-natives.

“They’re business professionals who don’t have the normal Web3 vernacular down," he said. "They may not even own crypto or have a [digital currency] wallet. We’re looking at how to bridge that gap.”

Some see the model as the way of the future for restaurants, though it remains to be seen how it will play out as NFT-backed concepts come to fruition.

UPDATE: This story has been updated with new information from  SHŌ Group principals.