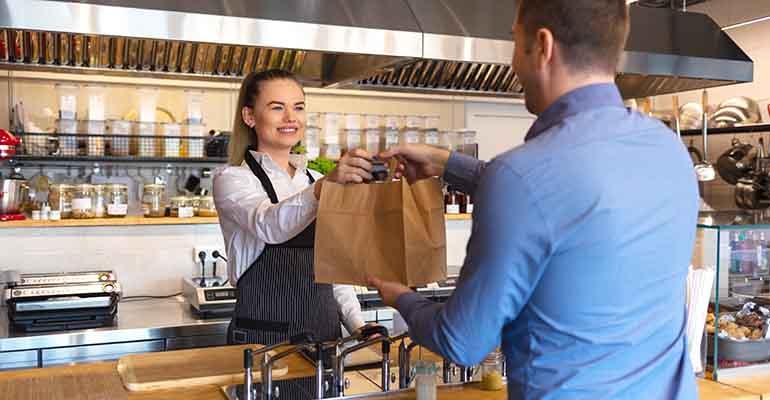 Do we forget about pickup when we talk off-premise?

Restaurant delivery gets all the buzz, but pickup has its perks and profits

When it comes to off-premise, the restaurant industry has been focused on delivery. This makes sense — delivery logistics are complicated, and the third-party fees are high, as are the chances that things can go wrong. But 93% of off-premise operations are still traditional takeout, meaning customers enter the restaurant to pick up the orders themselves, according to research from the National Restaurant Association.

On a panel about off-premise at this year’s ICR conference in Orlando, Noah Glass, CEO and founder of online ordering platform Olo, said, "one thing I want to say at the top, we think a lot about delivery, but we also think a lot about takeout. Takeout is still a massive part of the overall off-premise space."

Pickup has better margins for restaurants and can give a restaurant a bit more control over its product.

"The growth in digitally ordered carry-out foods is a good example of responding to the need to eat away from home on our own terms," wrote David Portalatin, of market research firm NPD, in a blog post analyzing off-premise.  NPD found that digital orders for carryout have increased more than orders for delivery.

But the power of pickup can take even seasoned professionals off guard.

Jim Collins, CEO of Kitchen United, a ghost kitchen company, was also on the panel. He was surprised when customers showed up at the door asking to order food, he said.

"People are always asking me, what changed since we got started," said Collins in an interview after the panel. "And when we started, we sort of had this notional idea, based on largely wrong assumptions, that what we needed was 10,000-square-foot warehouses in opportunity zones, because all of the business that was going to come into our restaurant partners was going to come through third-party marketplaces. To be honest originally, that was our business plan."

But after observing the market for about six months, the business plan changed. People wanted to come in. They ordered online for pick up and some just showed up and wanted to order onsite. Kitchen United rethought its business plan to include kiosks and its own ordering app. Those changes were all demand-driven, said Collins.

"I'm not a big believer of telling the customer they can't do something the way they want to do it," he said.