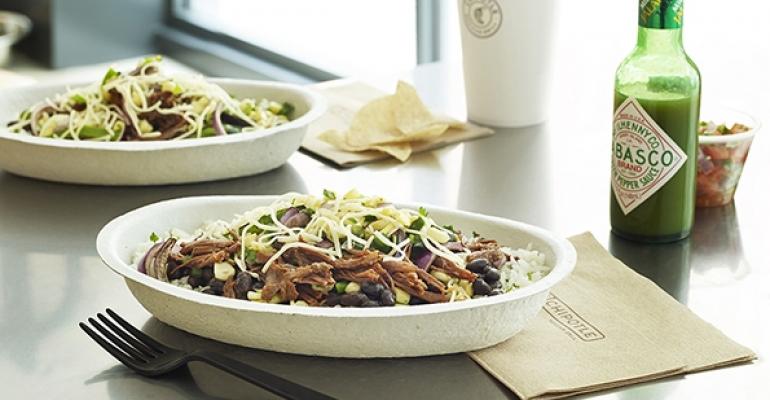 <p>Chipotle took a hit to its same-store sales during the second quarter, when it stopped selling pork in many of its restaurants.</p>
News>Fast Casual

Chipotle puts pork back on menu at 90% of restaurants

Full menu to be available across U.S. by end of November

Pork carnitas is back at about 90 percent of Chipotle Mexican Grill restaurants, and will be available at all locations by the end of November, the company said Monday.

The Denver-based chain pulled pork from its menu at more than a third of its 1,878 units earlier this year after suspending one of its suppliers. A routine audit had found the supplier was not adhering to the company’s strict animal welfare standards.

As a result, and by working with existing suppliers, Chipotle has now restored pork to the menu at all locations across the U.S., except restaurants in Cleveland, Atlanta and the Carolinas.

The chain took a hit as a result. In the second quarter ended June 30, Chipotle’s same-store sales rose 4.3 percent, but that included a slight decline in traffic, which was blamed on the missing pork across much of the country.

“The decision to stop selling carnitas in many of our restaurants was an easy one,” Steve Ells, Chipotle founder, chairman and co-CEO, said in a statement Monday. “We simply will not compromise our high standards for animal welfare. Since making this decision, we have heard from thousands of our customers who have expressed support for our decision and commended us for standing on principle.”

Ells said in July that he was optimistic that the return of pork before the end of the year would keep the chain on track to reach same-store sales in the low- to mid-single-digit range for the year, as previously projected.

Chipotle uses meat from pigs raised with access to the outdoors or in deeply bedded barns, without the use of antibiotics and no gestation crates. Conventionally raised pork in the U.S. typically does not meet those standards, which forced Chipotle to turn to an overseas supplier.