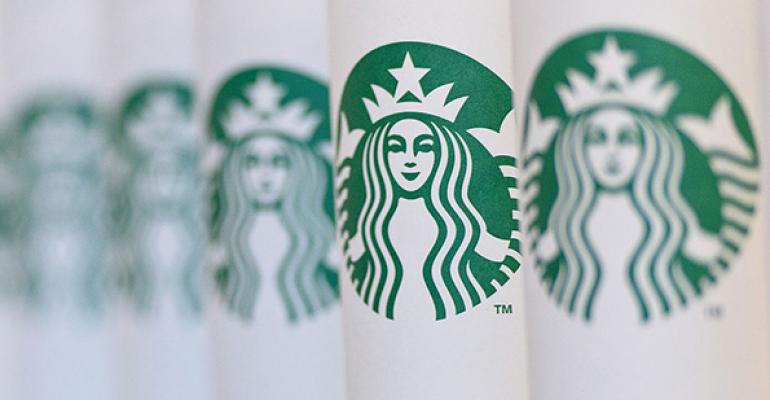 Starbucks takes a hit for My Starbucks Rewards changes

Loyalty experts say the coffeehouse chain did the right thing

Starbucks Corp. took a hit to brand perception by changing its loyalty program, and customers continue to vent their unhappiness on social media. But loyalty experts say the coffeehouse giant did the right thing, and other restaurant chains should take note.

Starbucks last month announced plans to revamp its loyalty program, starting in April, to allow My Starbucks Rewards members to earn stars based on spending, rather than visits. The goal was in part to stop “transaction splitting,” or customers who broke up their purchases into multiple transactions to earn more reward points, a practice that slowed throughput.

Customers, however, did not appear to see the benefit of faster throughput, and instead turned to social media to express their dissatisfaction with the rewards-for-spending switch.

@Starbucks program changes really hurt your loyal cup a day of drip coffee drinkers like me.

The week of the announcement, about 80 percent of current Starbucks customers said they would consider making their next purchase at the coffeehouse chain. But after the news hit, that number drifted down to 71 percent, YouGov said.

In addition, Starbucks’ “buzz score,” which measures whether respondents have heard negative or positive things about the brand in the past two weeks, also plummeted. On the day the announcement was made, Starbucks’ buzz score was 60. By the following week, that score declined to 29, YouGov said.

Wall Street analysts, meanwhile, predicted that the loyalty program change would send some customers into the arms of competitor Dunkin’ Donuts.

Nigel Travis, Dunkin’ Brands Group Inc. CEO, told Reuters that the Canton, Mass.-based coffee-and-doughnut chain has been offering $5 gift cards in a targeted marketing campaign to capitalize on the imbroglio.

Those who work with loyalty programs, however, see Starbucks’ changes as a smart move from a revenue perspective.

Generally most businesses run on an 80/20 rule, he said. Roughly 20 percent of customers drive 80 percent of revenues. And Starbucks is looking to tap those big spenders.

“From a sales perspective, it will be very positive,” Luo said. “If 30 percent of their customers are using the loyalty program, and you can increase their spend per transaction by 20 percent, that’s a 6 percent lift to total revenues.”

Zach Goldstein, CEO and founder of customer loyalty and retention marketing services firm Thanx, said, “Starbucks’ move is a clear focus on prioritizing the right customers by rewarding those who deliver the most ROI to the company and actually making their loyalty experience better.”

The Starbucks customers most angered by the changes are lower value, and the current program was too expensive, Goldstein said.

A customer who regularly spends $2 on a drip coffee would earn a free item after spending about $24 over 12 visits. Meanwhile, the regular buyer of a $4.50 latte would spend about $54 over a dozen visits before getting something free.

That means the drip coffee customer is getting a 17-percent effective discount when they earn a free drink, while the latte drinker is getting a 7.4-percent discount — which is more in line with other loyalty programs, like Target, for example, which gives back about 5 percent, said Goldstein.

Mark Johnson, CEO and chief marketing officer of loyalty marketing association Loyalty360, said the “gaming of the system” by customers who were transaction splitting threatened the gains Starbucks has made with mobile ordering and payment.

In high-volume units in particular, Starbucks customers are moving through the line quicker as more people use the chain’s order and pay-ahead option rolled out last year, but transaction splitters — who account for about 1 percent of sales — slow the line down.

Research by point-of-sale advisory firm Software Advice Inc. last year indicated that Millennials, in particular, prefer loyalty programs that allow them to earn points for dollars spent, rather than visits. 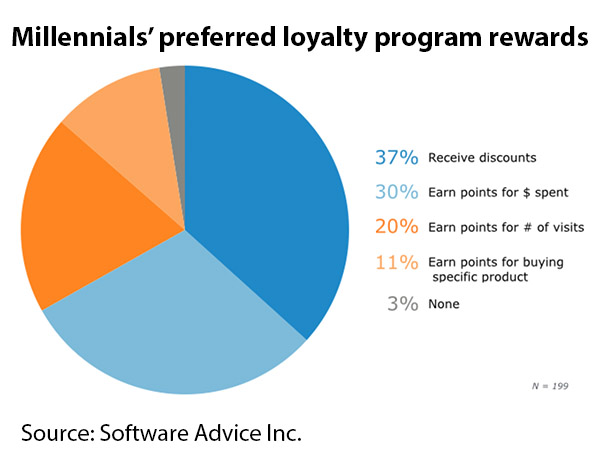 For restaurant chains who are thinking of launching loyalty programs, the choice between spending-based or visit-based rewards is clear, said Luo of FiveStar.

“Go for points for spending,” he said. “That’s the smart thing. Loyalty has so many possible effects and one of them is increasing spend per transaction, but you can’t get that unless you provide rewards for spending.”

Moving away from traditional approaches

When the average spend is consistent for each visit, like getting a haircut, for example, rewards for visits might make just as much sense, said John Bartold, practice leader, Loyalty|CX for loyalty program management firm Epsilon. When the amount of spend varies widely by customer and visit, companies tend to prefer a spending-based approach.

Epsilon, however, is seeing more companies move away from traditional approaches to reward customers more broadly for brand engagement, he said.

“With better methods to collect information on member activity outside of purchase, we are identifying other activities and events aligned to financial benefit,” he said. “So, rather than looking just at spend, we monitor and reward a range of other behaviors and activities, such as referrals, online posts, product or service reviews or using products or services during off peak times."

Dan Bejmuk, CEO of digital services firm Dreambox, based in Los Angeles, however, said it really depends on the brand.

Changing an existing program is never easy, he noted.

“We’ve been involved with a number of clients that have rolled out and pulled back loyalty programs. Any change is always responded to with fear on the part of the customer because there’s concern their investment may materially change in a way that doesn’t impact them, the guest, well,” he said.

“But over time, the institutional memory from the guest base will pass,” Bejmuk noted. “They’ll get over it.”

UPDATE: March 8, 2016 This story has been updated to specify the advisory specialty of Software Advice Inc.