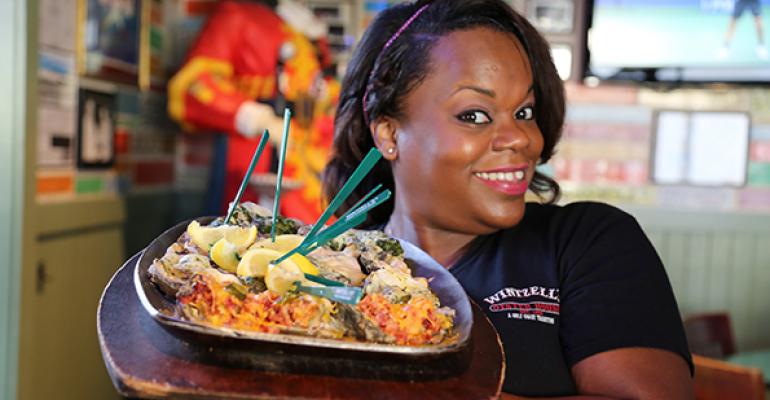 Wintzell’s Oyster House, a 76-year-old institution in Alabama, has kept up with the times by embracing social media and technology while maintaining its brand legacy.

Wintzell’s, founded in 1938 as a six-seat oyster bar in Mobile, Ala., by J. Oliver Wintzell, is now a regional casual-dining brand with 10 units in two states.

Part of staying youthful has been Wintzell’s embrace of social media. The brand maintains a Twitter account, @FriedStewedNude, where it posts many of the thousands of the homespun bits of wisdom from slips of paper that cover its interiors. Wintzell’s also posts customers’ Instagram photos on its website if they are hashtagged #wintzells.

Mobile, Ala.-based parent company Wintzell's Inc., which takes its name from Wintzell’s longtime slogan about its oyster preparations, plans to open its 11th restaurant next week in Greenville, Ala.

Over the past six years, the company has started a franchise program. Wintzell’s opened its first franchised unit in Guntersville, Ala., in June 2008, and a subsequent franchise opened in Pleasant Hills, Pa. The company has targeted a total of 25 locations by 2018.

Wintzell’s has been able to grow, even in a crowded Gulf market for casual-dining seafood.

“We know that we cannot rely solely on our unique history to perpetuate our brand,” Omainsky said.

The original founders sold the Wintzell’s brand in the 1980s. After several ownership changes, Mobile natives Bob and Buffy Donlon bought Wintzell’s in 2000 and began expanding it.

Third-generation family member Omainsky said the original location remains, though it has been expanded and updated through the years. His family purchased the company “with the intention to restore the Wintzell’s image and expand the concept,” he said.

“From marketing to menu development to everything in between, our creative process is very much a collaborative one, especially now with three generations of family members weighing in on decisions,” Clay Omainsky said.

For example, “Within the last year we have kicked off an extensive offering of craft beers, many of which are brewed here in Alabama, and that’s been a popular and well-received venture for us,” he said.

Founder J. Oliver Wintzell’s pithy sayings provide ready fodder for tweets, Omainsky said. His favorites: “I don’t like to spread gossip, but what else can you do with it?” and “Welcome to Wintzell’s! The man who parked your car doesn’t work here.”

The use of social media has also been beneficial for a brand with a small marketing spend, he said.

“For a multiunit restaurant company, our advertising budget is relatively small, and that’s because we direct those funds toward community projects and events,” Omainsky said.

Local Gulf seafood remains a mainstay of the menu.

“Serving Gulf seafood has always been a cornerstone of our concept, but turning our focus to seafood traceability has not only appealed to our guests but also advanced our approach to buying locally,” Omainsky said.

“With our catch of the day entrée (wild-caught Gulf Coast finfish) our guests enjoy the enhanced confidence in learning the sea-to-table story behind each flavorful offering, achieved simply by scanning a QR code at the table,” he said.