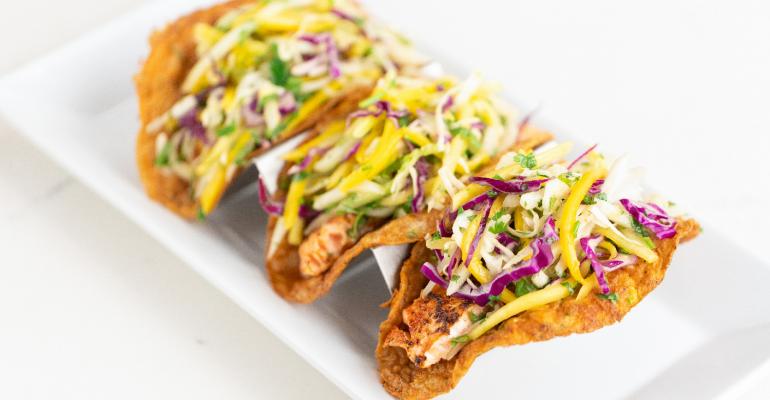 The coronavirus pandemic has turned daily life on its head: the corner office has given way to the kitchen table, and the classroom has been supplanted by the computer screen. Dining patterns have been similarly disrupted, as consumers have rediscovered their stovetops and ovens. A major beneficiary of this shift has been seafood, which Nielsen reports was the fastest growing supermarket category during the last week of May. Buoyed by escalating meat and poultry prices, purchase volumes jumped a whopping 48% over the previous week and 26% over the prior 13-week period.

This is a dramatic about-face from the norm, when restaurants typically account for 75% of seafood eaten in the US. Often unfamiliar with and/or intimidated by the bounty of seafaring proteins, many patrons prefer to leave preparation to chefs, who are stepping up their seafood game as they gradually reopen their restaurant doors.

Chain creativity. Some restaurant chains are reasserting their seafood expertise with attractive dishes that take inspiration from the global pantry. That is the case with Bellagreen, an eight-unit, fast-casual operation based in Plano, Texas, which just announced the summer special paleo mango salmon tacos , made with trendy tajin — the Mexican chile-and-lime combination seasoning — then topped with shredded jicama, fresh mango, cucumber and mixed cabbage. It’s served with cilantro and citrus-honey vinaigrette atop an almond-flour tortilla.

The 16-unit fast-casual chain, Lemonade, in Los Angeles takes diners to another part of the world with coriander seared Ahi Tuna with sweet chile-citrus ponzu sauce.

Red Lobster, which wrote the book on successful seafood promotions, invokes Louisiana cookery with Salmon New Orleans, in which blackened salmon and shrimp are tossed in Cajun butter sauce and garnished with tomato relish.

Independent innovation. Speaking of New Orleans, restaurateurs there are noted for their seafood panache, and invention is definitely on the bill of fare at Molly’s Rise & Shine. The new-age breakfast emporium tempts diners with sardines and bagel chips, which includes a deluxe tin of sardines, hot cherry peppers, chimichurri cream cheese, capers and red onions — a sly take on classic bagel-and-schmear combo. Local legend Bayona steps outside the box, too, with a local favorite, redfish, served with an unexpected accompaniment of Thai shrimp-and-pork dumplings, bok choy and spicy lemongrass broth.

Some chefs use seafood as a jumping-off point for riffs on the classics, as at Acre in Auburn, Ala., where the menu boasts Gulf red snapper with collard green spaetzle, popcorn cream and barbecue peanut slaw; along with gulf shrimp and “grits” with Mississippi Delta rice, tomato-bacon fondue, garden herbs salad and crispy okra “crouton.”

On the heels of the schnitzel revival, seafood versions are having a moment, as at The Optimist in Atlanta, where Skate Wing Schnitzel is prepared with charred greens and pickled ramps or The Ordinary in Charleston, S.C., where fish schnitzel is served with cauliflower, caper, lemon and golden raisin. Other traditional dishes are also being reimagined with fish in the starring role: The Optimist offers Monkfish Coq au Vin with charred allium, and Bayona in New Orleans features Pacific Salmon Choucroute with red bliss potatoes in Gewurztraminer sauce.

In Nashville, the abbreviated off-premise menu at Henrietta Red takes a Mediterranean tack with salt cod empanadas made with brandade and cream cheese in pastry crust and octopus salad with sunchoke, orange, Castelvetrano olives, saffron aioli and parsley. In Atlanta, Aziza, one of the new crop of Israeli-inspired restaurants, offers trout with fava beans, cauliflower and preserved lemon.

Looking ahead, attractive specials like these will be designed to reel in pantry-fatigued patrons seeking an excuse to put down their frying pans and enjoy can’t-miss, can’t-make-at-home seafood dishes.