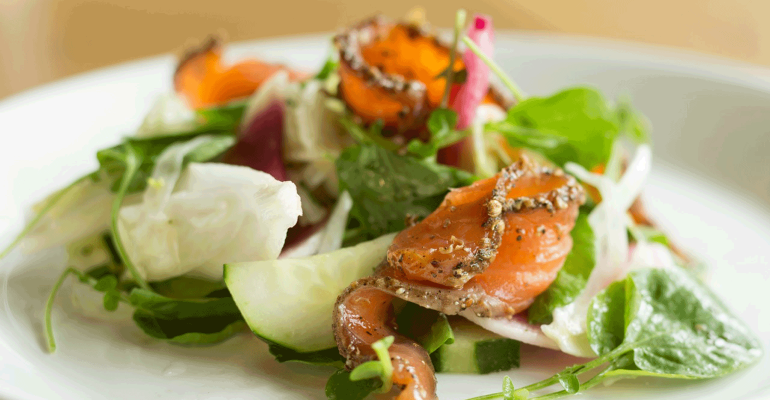 When David Burke invented salmon pastrami in 1988, the then-up-and-coming chef was just looking to create an American version of gravlax, not start a seafood movement.

But nearly three decades later, his inventive, smoked twist on salmon has not only endured, but also spawned a broader trend of seafood charcuterie, or “seacuterie,” on restaurant menus.

“It was something that was very ahead of its time,” Burke said. “I’m happy it has lasted.”

When Burke first served the dish at The River Café in Brooklyn, N.Y., it was a hit with diners and food critics alike. Inspired by a post-college stint making gravlax in Norway, Burke made the dish by coating a side of house-smoked salmon with a reduction of molasses and pastrami spices, then rolling it and slicing it thin and serving it with a housemade potato roll and a drizzle of mustard honey sauce.

The innovative dish gained even more popularity and positive press a few years later when Burke added it to the menu at his Park Avenue Café (where he would later introduce another now-iconic item, cheesecake lollipops). The item has been on all of his menus in various dishes ever since.

Today, salmon pastrami is not only on Burke’s menu at his recently opened Tavern62 by David Burke in New York City, as well as available pre-packaged at select grocery stores, but it’s also on menus across the country as chefs riff on the original, as well as create new seacuterie options.

At Altabira City Tavern in Portland, Ore., chef de cuisine Luis Escorcia is serving a housemade salmon pastrami atop a salad of fennel, endive and cucumber, dressed with a mustard-caper vinaigrette.

“I really like that it has the pastrami texture and flavor, but is salmon,” Escorcia said. “Our customers like that it’s a light and healthy lunch or dinner salad choice.” Smoked salmon rillettes are made into a spread, topped with spicy green sauce and served with grilled bread at Three Degrees.

At PB Catch Seafood and Raw Bar in Palm Beach, Fla., chef Aaron Black offers a seacuterie menu with a choice of three or six seafood selections served on a board, including his version of salmon pastrami served with a rye crouton, sauerkraut and Thousand Island aïoli; an octopus torchon served with chorizo and sweet pickled corn; and a tuna n’duja, served with raspberry Dijon jam and toast points.

Lauro Romero, executive chef of Three Degrees in Portland, Ore., is incorporating smoked seafood into his rotating menu of charcuterie boards. Currently, he is serving smoked salmon rillettes, made into a pâté-like spread and portioned in a glass jar topped with aguachile — a spicy Mexican green sauce — and served with grilled bread on a stone slab.

“I like that it’s somewhat unexpected and uncommon, not to mention delicious,” Vuong said. “[Seacuterie] is a great answer if you love interesting seafood with different textures and flavors.”

At Bookstore Bar & Café in Seattle, executive chef Eric Rivera has created a smokehouse menu featuring a variety of preserved seafood. Offered during happy hour, the menu has a selection that is cured and then smoked, as well as unique small plates such as a savory pancake topped with housemade salmon katsuobushi — a Japanese technique of curing, drying and fermenting fish to yield flavor-packed flakes.

While Burke’s iconic dish may have been an early inspiration, he also points to several other reasons chefs are likely menuing more seacuterie these days.

“Seacuterie is sexier than the raw bar. People are raw-barred out, and raw bar is expensive,” Burke said. “Seacuterie gives [chefs] more options … has a great profit margin … a longer shelf life.”