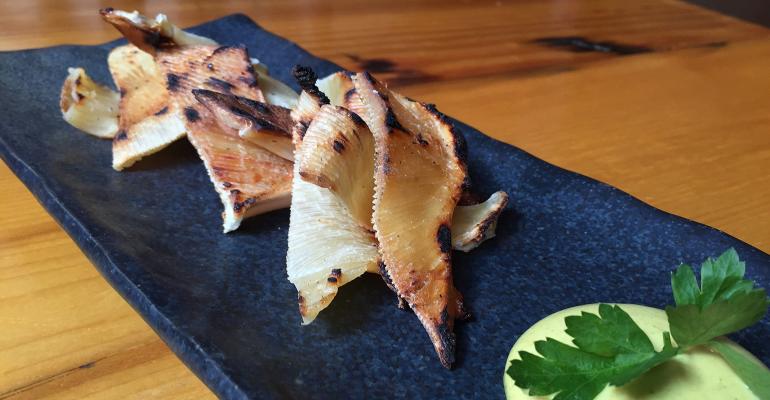 People are snacking more these days, and they’re also eating more seafood. The convergence of these two trends is resulting in a snack-culture sea change.

According to Datassential’s 2017 MenuTrends Keynote Report: Seafood, nearly 90 percent of consumers said they have snacked on seafood, such as popcorn shrimp, sushi or calamari.

While popcorn shrimp is the most popular seafood snack, chefs are dishing out more inventive seafood nibbles.

“If seafood is growing and snacking is growing, why not aim for the intersection?” said Datassential analyst Kyle Chamberlain.

For example, Smickles, a new pickles-meets-smelt starter, are on the menu at Shaker & Spear in Seattle. Chef Carolynn Spence’s unique snack is made by holding both smelts and pickles in dill pickle brine, drying them and coating them in a flour mix, frying them and serving them with tartar sauce and lemon wedges. “Smickles are a fun little treat,” Spence said. “They are perfect to share with the table and are extra fun because you can’t tell if you’re going to eat a smelt or a pickle spear since they’re both roughly the same size.”

“Customers like our Pokecado Toast because it's healthy and filling, while still being packed with flavor,” said Pokeatery co-founder Joann Chung. “They also like that it can be customized and just picked up with their hands and eaten in big bites.”

Meanwhile, at Camperdown Elm in Brooklyn, N.Y., executive chef and partner Brad Willits is offering SMAK as a snack. The pâté is made with smoked mackerel, amberjack and kingfish, and served with housemade squid-ink crackers and sesame seed. The item is inspired by a popular smoked fish snack Willits grew up eating in South Florida, where local fisherman make it with bycatch.

“I grew up eating the pâté as a snack with Captain's Wafers and hot sauce,” Willits said. “I just elevated the cracker a bit and lightened the dish. SMAK is part of a selection of items under the “snack” section of Camperdown Elm’s menu, half of which include seafood.

“When you come here, our snack section makes people feel like this is where you should start your meal,” Willits said.

Charred Skate Fin, a kind of seafood jerky made by char-grilling skate fin is served with a hawaij (a Yemeni spice mix) curry dip at Bessou in New York City.

“Dried seafood is beloved in Japan, and skate jerky, or ‘eihire,’ is especially popular as a drinking snack,” said owner Maiko Kyogoku. “We update this dish by giving it extra char and making a special curry aïoli with hawaij.”

Also on Bessou’s menu is ebi shinjeo, or shrimp fritters. The poppable, fried shrimp balls are served with kabocha purée and chive oil.

“It's the perfect dish when it comes to balancing flavor, texture, quantity and price,” Mahler said. “It’s great for sharing, combining everything that people go crazy for. Who doesn’t love spicy tuna, nachos, cheese and guacamole?”