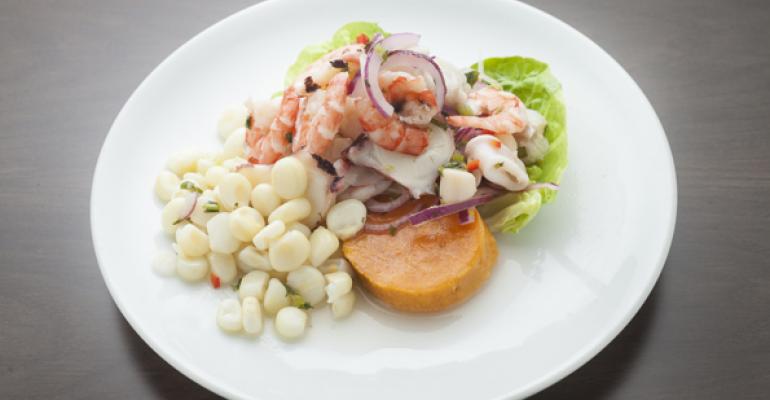 The once-misunderstood seafood dish is growing in popularity.

When award-winning chef and restaurateur Guillermo Pernot was serving ceviche 17 or so years ago, it was largely misunderstood.

“Nobody seemed to get it,” said Pernot, who is best known for bringing Nuevo Latino cuisine to Philadelphia with his now-defunct restaurant Pasion! “People didn’t seem to understand it.”

In 2001, Pernot even published a book on the classic South American dish of raw fish “cooked” in citrus juices, “Ceviche: Seafood, Salads and Cocktails with a Latino Twist,” but still it didn’t gain broad appeal.

Now, it seems diners and chefs alike are finally starting to get ceviche.

According to Datassential MenuTrends, ceviche appears on 26 percent more restaurant menus than it did in 2009. In addition, it’s among the fastest-growing appetizers, increasing 36 percent since 2009.

Though he no longer specializes in it, ceviche is on the menu and selling well at the four Cuba Libre Restaurant and Rum Bar units that Pernot oversees as executive chef and partner. “They get it. They enjoy it. [Ceviche] has gone mainstream,” said Pernot.

Among the many other restaurants across the country that have added ceviche of late is Zengo, a Latin-meets-Asian concept in Washington, D.C. Zengo’s menu typically features two types of ceviche, such as a bay scallop ceviche with Thai chili, peanut and mint, and a fluke ceviche with coconut, charred pineapple and basil. Diners can order from a table or sit at the sushi and ceviche bar and watch the chefs freshly marinate fish, shuck oysters and roll sushi.

“We’ve been doing it for a while based on the Latin theme of the restaurant,” said Graham Bartlett, regional executive chef for Richard Sandoval Restaurants, Zengo’s parent company. “We’ve definitely seen an increase in orders. It’s very popular.”

At the newly opened Luna Sur, a Latin fusion spot in New York City’s Hell’s Kitchen, chef Isaias Ortiz has a traditional Peruvian ceviche with scallops, octopus, shrimp and pollack marinated in lime juice, and has plans to add others once the restaurant gets settled in.

“So far they love it. Guacamole and ceviche are the most popular appetizers,” said Ortiz. “It’s the freshness.”

A gateway to the raw bar

While ceviche is most often found on menus that have heavy South American influence, other types of restaurants are also experimenting with their own versions of the fresh seafood dish.

A Toute Heure in Cranford, N.J., currently features two types of ceviche on its seasonal, ingredient-driven menu: a traditional scallop ceviche with house-made Sriracha sauce and an off-the-beaten-path snapper ceviche made with pickling brine and fresh herbs from the restaurant’s garden.

“Ceviche and raw bar menus in the past were limited to places that had a raw bar or were serving South American cuisine,” said ATH co-owner Andrea Carbine. “[Now,] chefs are playing around with flavors from all over the globe.”

Ceviche is doing so well at ATH that when Carbine and her partners open 100 Steps this fall, a New American restaurant across the street, it will include an entire bar dedicated to ceviche and other raw seafood. “For a lot who might be squeamish about raw bar … [ceviche] gets them over the mental barrier,” said Carbine. “It’s a gateway food into the raw bar world.”

Though it has grown in menu importance, ceviche is still most often found on the menu at fine-dining and casual-dining restaurants. Miami-based chef Sam Gorenstein hopes to change that with My Ceviche, a fast-casual ceviche bar.

“I knew ceviche had become popular in the U.S.,” said Gorenstein, a native of Colombia. “But there wasn’t a place where you could walk up to the counter and order a great ceviche at an affordable price like in South America.”

My Ceviche, which opened its first unit in South Beach in 2012, is an order-at-the-counter, build-your-own menu in the style of Chipotle Mexican Grill. Menu items include ceviche with any combination of whitefish, shrimp or octopus with a choice of six different sauces; ceviche bowls, with marinated seafood atop coconut-jasmine rice or cilantro quinoa; stone crab claws; and sides such as corn on the cob with queso fresco, guacamole and chips, and poached sweet potatoes. Ceviche orders come in 16- or 24-ounce portions and are priced between $10 and $14; the bowls are just $9.95.

Gorenstein and his partner recently opened a second, larger location in downtown Miami with tables and beer. A third location is set to open inside the Miami International Airport in 2014.

“Ceviche now is what sushi [was] 20 years ago,” said Gorenstein. “And it’s so much better than sushi. It has no carbs. It’s pure protein. Once you put a little bit of ceviche in your mouth … it’s a captivating flavor.