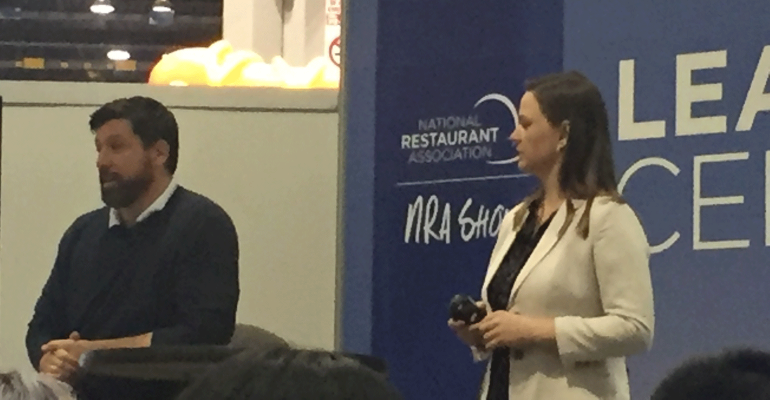 Sustainability, whether sourcing food responsibly or cutting down waste, is top-of-mind for many consumers. National Restaurant Association officials outlined steps operators can take and how to communicate what they’re doing to customers.

In a presentation at the NRA Show on Saturday, Laura Abshire, the association’s director of sustainability policy and government affairs, and Jeff Clark, director of the association’s Conserve Program, outlined survey results finding that issues around local sourcing and responsibly sourced fish were important both to chefs and their customers.

“Until about three years ago, we never saw that at all,” she said.

Sourcing fresh ingredients and responsibly sourced fish also ranked highly among consumers, Clark said, who additionally wanted restaurants to have animal welfare-related policies around issues such as treatment of animals with hormones and the living conditions of the hens laying the eggs they were buying.

“Knowing and stating where your food is coming from … is going to be a larger and larger factor for your bottom line,” he said.

Clark pointed to local Chicago operators such as Goose Island Brewery, which had customer-facing initiatives like using reclaimed wood in their tasting rooms, as well as bigger-picture issues, such as protecting the local ecosystem “to keep the water clean and healthy,” since high-quality water is necessary to make high-quality beer.

“Knowing some of these stories and being able to tell them to your customers is going to be really, really important,” he said.

When it came to sourcing seafood, he suggested moving away from mainstream fish such as salmon and tuna and offering lesser-known varieties such as the Chilipepper Rockfish, which is abundant on the West Coast. He said using such underutilized fish would allow more fisheries of more popular fish to replenish themselves.

Although such fish are harder to sell, Clark said it provided operators with the opportunity to engage with their customers and tell their restaurant’s story better.

Clark also advocated getting to know local farmers and ranchers and working with them to produce the items that you want to sell in your restaurants and, if you have the skilled staff to do so, buying and butchering whole animals, both to reduce waste and to save money while finding uses for non-center-of-the-plate cuts.

Abshire said food waste was now a priority for the NRA. Noting that up to 40 percent of the food produced in the United States goes uneaten, making food waste the largest component of municipal solid waste, she said that new regulations in some coastal communities no longer allowed food waste to be transported to landfills. Similar laws were likely to be passed elsewhere in the country, she noted, and would require operators to find new uses for food that they used to throw away. That could mean composting or finding new uses for food, such as donating it to hunger relief organizations or other charities.

Twenty-two percent of restaurants currently donate food and about 14 percent compost, she said.

“While that’s a small number, there really is a ton of room to grow in the composting space,” Abshire said.

However, 39 percent of operators said they don’t have composting facilities near them, she said. However some perceived barriers to food donation weren’t real. For example, restaurants don’t need to be concerned about liability issues if beneficiaries of their donations end up getting sick, she said. The 1996 Good Samaritan Food Donation Act indemnified operators from liability, and Abshire added that to date there hasn’t been a single case of liability stemming from food donations.

Plus, food donations don’t just help the community and spread good will, but can also have tax benefits.

She advised restaurateurs to find an enthusiastic champion on their staff to spearhead reduction of food waste, put that person in charge of tracking waste and start a donation program.