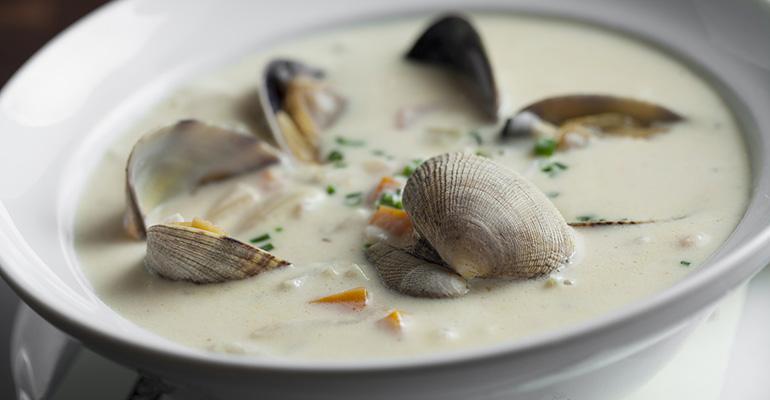 New England clam chowder has long been a fixture on menus in the Northeast, and now it has a following nationwide. The creamy, briny and comforting soup made of clams, potatoes, onions and milk or cream has fans across the country who are making their own variations on the classic, sometimes adding regional ingredients, and sometimes just embellishing with their own creativity.

“Chowder is rich and warm, great for a cold day wherever you are in the country,” said Brian Okada, culinary director of Water Grill.

The California-based fine-dining restaurant serves Okada’s take on New England clam chowder at all six of its locations, and he says it’s a guest favorite in coastal cities as well as at inland venues such as Las Vegas and Dallas.

Okada says his version is a lighter take on the classic and uses in-the-shell Manila clams and Russian banana potatoes.

“What better to have as a starter in any seafood restaurant,” said Okada. “The consistency, flavor and overall quality of the product in the soup makes it a must-have.”

“Chowder is warm and rich, which is everything I want in a winter dish,” said Romero.

He makes the soup his own by starting with whatever Oregon clams look good, such as Manila, razor, butter and geoducks. He places those in a bowl with house-cured bacon, smoked potatoes and sautéed seasonal vegetables. Then he pours clam chowder base over the top. He keeps the dish gluten-free by thickening the base with celery root and potato instead of flour.

“I’m really proud of the deconstructed version on our menu,” Romero said. “It has all the familiar flavors, but [is] presented differently with little touches that go a long way.” 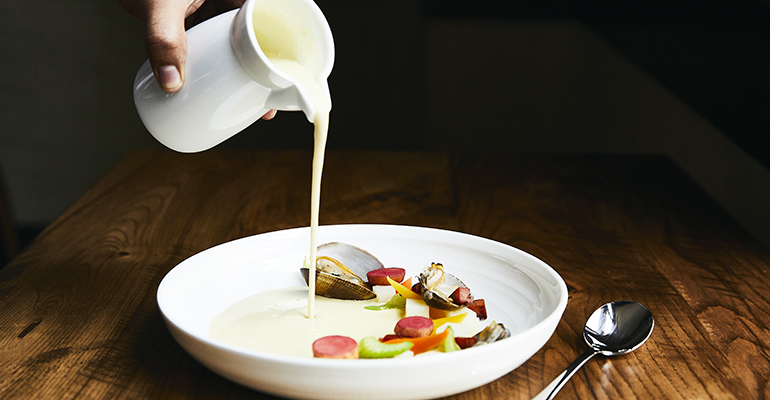 Pouring on the (deconstructed) clam chowder at King Tide Fish and Shell.

In the 1980s Sam McCleland fell in love with the quahog chowder at the Famous Homeport Restaurant on the Massachusetts Island of Martha’s Vineyard. Quahog is a New England term for large clams.

At the time, McCleland was a sous chef at a small inn nearby, and he managed to procure the recipe from Homeport’s chef. He now features it on the menu at The Bell and Anchor in Sag Harbor, N.Y., on Long Island, where he’s executive chef.

“Sometimes you have to borrow great recipes and this is one of them,” McCleland said.

He still calls the dish Homeport Chowder, and he makes it with large clams from Peconic Bay, where The Bell and Anchor is located, along with bacon that’s cured and smoked in-house with local apple wood. The recipe also has a roux, celery, onion, white wine, lemon thyme from McCleland’s home garden that his children help pick for him, potatoes and cream. It’s garnished with chives.

Brian Hinshaw was “regionally motivated” to add a classic clam chowder to the menu at the Boston location of Ocean Prime, the fine-dining chain based in Columbus, Ohio, where he’s corporate executive chef.

“It is such an iconic soup for Bostonians that we felt compelled to add it,” Hinshaw said.

“We realized the following there was for a great clam chowder, as was their affinity for a great lobster roll,” Hinshaw said. “So we developed them both for the menu in Boston.”

Rhode Island chowders often have heavy doses of dill and parsley, and that’s true of the Native Scallop Chowder at The Mooring Seafood Kitchen and Bar in Newport, R.I. On the menu since the restaurant opened in 1981, it features the rich creamy base of a traditional New England clam chowder but with sea scallops as well as dill and parsley.

“What makes the scallop chowder special is the specific amount of white wine added to the recipe, which brightens the flavor and complements the richness of the scallops,” said Karsten Hart, director of restaurants for Newport Restaurant Group, of which The Mooring is a part.