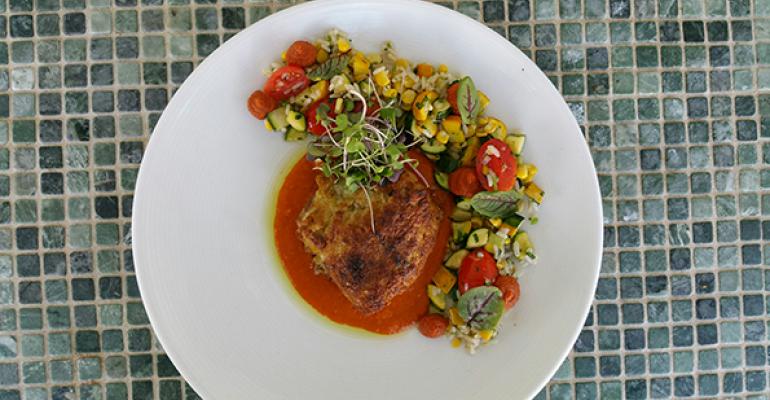 Most Americans have never heard of wreckfish, triggerfish or grey mullet, but those who visit full-service restaurants may soon be eating these species. Chefs across the country are increasingly menuing bycatch, or “trash fish” — species unintentionally caught while fishing for a target species — as a way to get diners to think outside the salmon-tuna-shrimp box.

“Trash fish” are typically thrown away by fisherman because they can’t sell them. Using these lesser known or undesirable species not only allows fisherman to sell more of their haul and reduce waste, but as diners begin to see these species as viable dinner options it reduces the chances of overfishing other species.

“Anyone can throw a piece of grouper on the grill, and it'll taste good, but something like king mackerel takes a little more skill and craftsmanship to please the masses,” said Greg Baker, chef and co-owner of The Refinery in Tampa, Fla. “I enjoy turning customers onto something they'd normally turn their noses up to.”

The Refinery boasts a menu that is sourced locally and changed weekly, and Baker has been offering wahoo, a tropical fish whose flavor is often compared to mackerel. Over the last few months, Baker has offered a number of preparations of wahoo, including pan searing it and serving it with black rice, a molasses-calabaza puree, Frangelico sabayon and pea shoots, and rubbing it with chile it and serving it with kale-jalapeno grits and a sauté of tomatoes, oyster mushrooms, fennel and roasted red onion.

Baker, who has been cooking up a variety of underutilized fish since the 1990s, said he actually prefers it to mainstream fish, in part because of sustainability, but especially for the culinary challenge. This fall Baker is looking forward to introducing guests to sheepshead, a firm-flesh species; cobia, comparable in taste to Chilean sea bass; and triggerfish, a white-flesh fish.

Similarly, Adam Hegsted, chef and owner of The Wandering Table in Spokane, Wash., likes these types of fish because it presents an opportunity to offer guests a new and different experience.

“Using underutilized fish has become a way for us to create an even more unique experience at our restaurants,” Hegsted said. “We have something that is different and special, which also happens to be underutilized.”

Lately, Hegsted has been using a lot of sablefish, a mild Pacific Northwest species also known as butterfish or black cod. For example, he recently offered a wood-fired sablefish marinated in miso-sake, roasted in applewood, and served with crispy phyllo layers and slaw. Hegsted also enjoys using lingcod.

Hegsted also likes using trash fish because of the cost. He said that the sablefish sells equally well as his sockeye salmon, but the food cost is much better. Bycatch also allows Hegsted to give the diner a larger portion with more sides for the same price.

Kevin Korman, chef of Caliza in Alys Beach, Fla., enjoys using underutilized species so much that he actually made it a permanent menu option. Korman regularly reaches out to local fisherman for species considered bycatch of the more popular species, including black drum, sheepshead, mackerel and wreckfish, and then creates dishes utilizing those fish. Currently, he is preparing puppy drum, a cousin of the red fish, with a sunflower seed crust, succotash, salumi puree, minestrone and Carolina Gold rice.

“Each species lends itself differently to different preparations,” Korman said. “I really like the texture and flavor of wreckfish. Plus, I think it tells a cool story — it’s a smaller, juvenile species that swims in and out of ship wrecks, hence the name.”

It’s not often that chef Joseph Realmuto of Nick & Toni’s in East Hampton, N.Y., gets the opportunity to menu bycatch. But when he’s fortunate enough to have his supplier bring him some, Realmuto jumps at the chance to serve it. Most recently, Realmuto’s supplier delivered dogfish, a small species of shark with firm, full-flavored flesh.

“I really liked the dogfish because it was a fish that everyone catches on the East End, including myself, [but] have never eaten,” Realmuto said. “I pan roasted it and served it with a sauce of white wine and vegetables from the garden. It was amazing.”

Correction: Aug. 25, 2015  An earlier version of this article mischaracterized Alaska pollock as an underutilized fish.