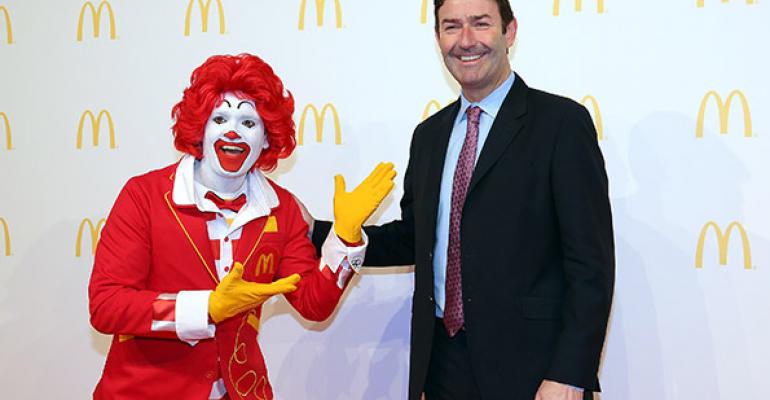 McDonald’s Corp. has a loaded strategy for fixing its U.S. business, which has been weak for three years now, including a simplified menu, all-day breakfast, a new mobile app, a new permanent value offering and fewer limited-time offers.

The efforts represent a broad-based approach to turn around the chain’s biggest market, which has been stubbornly weak.

“There is no silver bullet,” McDonald’s CEO Steve Easterbrook said during a call Thursday discussing second-quarter earnings. “No one move will turn a business that’s been in decline for three years.”

McDonald’s is under intense pressure to reverse its sales decline, which included a 2-percent drop in domestic same-store sales in the second quarter ended June 30.

The Oak Brook, Ill.-based quick-service operator has done several things to improve its business, including restructuring its global operations into regions based on the countries’ state of development rather than geography, which Easterbrook called the biggest restructuring in McDonald’s history.

In the second quarter, McDonald’s recorded $45 million in severance costs in both the U.S. and international markets. That reorganization, done to improve the organization’s efficiency, was complete last month.

“We made a fundamental shift in the way the business is organized to eliminate redundancies, maximize talent, and create a greater sense of urgency in the company and leadership,” Easterbrook said. “We’re already realizing some of the benefits.”

McDonald’s is refranchising 3,500 restaurants and will realize $300 million in annual selling, general and administrative cost reductions by 2017. The company is also analyzing other potential plans to boost “shareholder value” and satisfy investors pushing for improvements to drive up share price.

McDonald’s plans to release more details on those potential changes in November, but chief financial officer Kevin Ozan said during the call that the company is looking at restaurant ownership, its assets and its cost structures.

“We’re looking at everything,” Ozan said when asked whether that analysis includes McDonald’s real estate ownership.

Some activist investors have pushed McDonald’s to spin off its real estate holdings into an investment trust, which the company has long resisted.

Yet perhaps McDonald’s most important initiative is to find a way to lift U.S. sales, which have been hurt by heightened competition in recent years from chains like Burger King, Jack in the Box, Sonic and Wendy’s.

The U.S. represents 40 percent of McDonald’s revenue, and is its most important market. While the company is seeing improvement in other global markets like China and Australia, its domestic business continues to lag despite an intense focus on a turnaround. Investors are eager for domestic improvement.

“A turn in other parts of the world sounds great, but if they don’t get the U.S. fixed, I don’t think anybody is going to care,” said Peter Saleh, analyst with BTIG.

Perhaps McDonald’s most significant effort is all-day breakfast, which it began testing in San Diego and expanded into other markets like Nashville, Tenn. Those trials “have gone well,” Easterbrook said. Nation’s Restaurant News reported earlier this week that franchisees are being told to prepare for a possible national rollout by October. Franchisees and many analysts now say that all-day breakfast is inevitable, given the level of buzz the company has received from the idea.

But Easterbrook also said that McDonald’s must simplify its menu. The chain has been criticized during its sales slump for its extensive menu, which many say has hurt sales by slowing service and complicating operations. The company is working to streamline its menu, starting with a reduction in items listed on drive-thru menus to only the most popular items.

Easterbrook said McDonald’s must improve operations so they are less complex, even if all-day breakfast goes national. That could mean cuts to the chain’s menu, but it could also mean operational changes to improve efficiency in preparation and ordering.

“The net-net has to be simplification,” Easterbrook said. “Only on that basis are we moving forward.”

That simplification also extends to the company’s limited-time offers. The company will emphasize “quality over quantity” in its LTOs, Easterbrook said.

“There won’t be a lot of LTOs,” he said. “We would be looking at fewer, higher-impact items going out.”

Meanwhile, McDonald’s is working on a new value offering. The company introduced a summer deal of a Double Cheeseburger and small fries priced at $2.50, and has tweaked that offer after some struggles in its first few weeks, executives said. But it is also looking for something more permanent.

“Operators and the management team came together and recognized the need for a national value offer this summer,” Easterbrook said. He said that the $2.50 deal “is not the answer” long term, and that he tasked leadership with coming up with something that would be “strong across the country and benefit everybody’s business.”

In addition, Easterbrook said McDonald’s would release its long-awaited smartphone app in the U.S. this summer. The app would likely include value offerings and incentives for beverage consumers. But it could also be expanded to include other capabilities, and will soon enable the chain to engage with individual customers.

“We recognize we are a little behind some others,” Easterbrook said. “But when we put our mind to things, we are one of the best executing companies in the world.”

The app is a key element in McDonald’s turnaround, and many analysts say it is a key contributor to the chain’s sales slump.