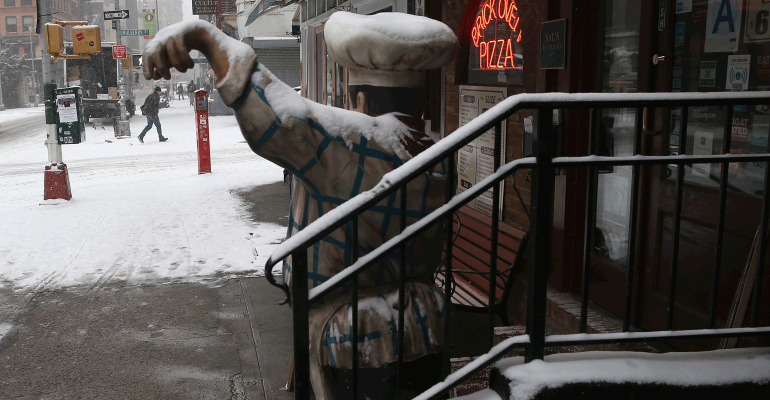 Same-store sales fall 0.3% during the month, with traffic down 3%

Same-store sales growth returned to negative territory in January after three straight months of flat or positive sales. Although this could spark concerns regarding the recovery in the fourth quarter, January was plagued with external factors that suggest it may be too soon to sound the alarm.

Same-store sales dipped 0.3 percent in January, which represented a 0.6-percentage-point drop from December. The driving force behind the slowdown was again a drop in same-store traffic, which, at a 3-percent year-over-year decline represented a 1.3-percentage-point drop from the previous month. This restaurant industry update comes from TDn2K data through The Restaurant Industry Snapshot, based on weekly sales from over 30,000 restaurant units, more than 170 brands and representing over $68 billion in annual revenue.

“Although January’s sales results are somewhat disappointing, we remain cautiously optimistic about the industry’s performance,” said Victor Fernandez, executive director of insights and knowledge for TDn2K. “Even if the month posted some small negative growth in sales, January results were better than any other month February through September last year. Furthermore, there were some extrinsic factors that added noise to the month’s results. The first week of the year was aided by a calendar shift regarding the New Year’s Day holiday, but more importantly severe winter storms hit large regions, primarily in the East Coast, causing significant losses in restaurant sales later in the month.”

Feeling the impact of winter storms

The three worst-performing regions in January, all with same-store sales below -2 percent, were the Mid-Atlantic, Midwest and New England. These three regions also experienced drops in sales growth during January of at least 1.5 percentage points compared with the average for the previous three months. Also suffering a decline in sales growth of 0.5 percentage points or worse compared with their previous three-month average were Texas, the Southeast and Florida.

The biggest effects of severe winter storms during the month were in many of those regions, particularly along the East Coast and Midwest.

“If sales from those three weakest performing regions (Mid-Atlantic, Midwest and New England) are excluded from all calculations, restaurant sales growth only dropped by 0.1 percentage points in January compared with the previous month,” Fernandez said. “In other words, sales growth would have remained essentially flat, and that doesn’t remove the small effect that weather had in other regions of the country.”

The economy continues to grow, and tax cuts should lend an additional boost, but that could be both good and bad, according to Joel Naroff, president of Naroff Economic Advisors and TDn2K economist.

“Stronger growth in the 3-percent range looks likely this year and into 2019 as consumers spend the extra money in their paychecks and businesses increase their capital spending,” Naroff said. “But the added demand comes on top of an economy that was already good, and labor markets were already tight. That has raised concerns wage and price inflation will accelerate and interest rates could rise higher and faster consequently.”

The growing uncertainty over inflation and interest rates explains, at least to some extent, the recent volatility in the equity markets, which had seen little worry for years. However, barring an unexpected market meltdown, the activity in the markets shouldn’t change the direction of growth significantly. It will be better the rest of this year and that should lead to more spending on all types of activity, including restaurants.

Leading the industry in average check growth was the casual-dining segment. This seems to be a departure from the discounting strategy and low average-check growth experienced by this segment last year.

On the opposite end of the spectrum, the segment with the lowest average check growth was fast casual. This segment has struggled with same-store sales and traffic for almost two years. The results since last October suggest a new strategy based on modest increases in average check either through conservative price increases, price promotions and discounting, or perhaps both.

The best-performing industry segments, and the only ones with positive sales in January, were fine dining and upscale casual. These two segments have led the industry in sales growth since the beginning of last year. Consumers seem to be demonstrating a willingness to spend more on experience-based dining. Business-related dining has also been a contributing factor, especially in the case of fine dining.

Casual dining has seen a resurgence recently and was the third best-performing segment for the month. January’s results almost broke into positive territory, and the segment experienced its second-best month in the last year.

Optimism is hard to come by when it comes to restaurant staffing. When listing their biggest concerns for 2018, operators focus on two areas: restaurant traffic and employee staffing. They have reason to be concerned regarding the people side of the business. With the economy at full employment, turnover has reached historically high levels for both hourly and management-level employees.

The reason for concern is twofold: recent TDn2K research showed that in 2017, top-performing restaurant brands based on same-store sales growth achieved turnover rates much lower than industry averages. The implication is that lower turnover rates are a leading indicator of superior revenue per restaurant.

On the cost end of the equation, turnover is also an enormous factor affecting profitability. According to the recent People Report Restaurant Recruiting and Turnover Survey, the hard costs associated with turning over one hourly, non-supervisory employee is on average about $2,000. With turnover rates well over 100 percent for most restaurant brands, the expense and disruption of business is an enormous operational cost.