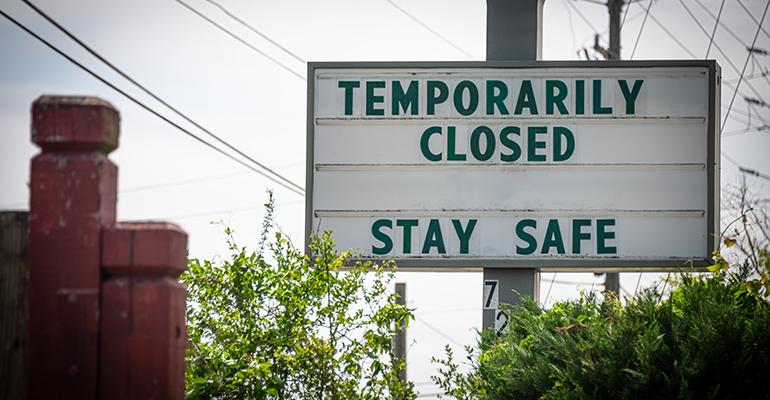 Darwin Brandis / iStock / Getty Images Plus
A growing number of restaurants across the country are now “reclosing” for dine-in service — including temporary restaurant closures due to COVID-19 cases.
Coronavirus>Restaurants Ready

As more restaurants reopen for dine-in, the threat of another shutdown looms

Restaurants in Chicago are preparing for limited indoor dining starting Friday as concern about a second shutdown in other states is growing, along with a reported spike in coronavirus cases.

Several states are reportedly showing signs of becoming hot spots for the virus. The governors of New York, New Jersey and Connecticut jointly announced a travel advisory that requires a 14-day quarantine for those traveling from nine states with “significant community spread,” a list that as of Wednesday included Alabama, Arkansas, Arizona, Florida, North Carolina, South Carolina, Washington, Utah and Texas.

In California and Texas, the governors reportedly hinted of a retrenchment of reopening plans, threatening to take action against restaurants not willing to follow safety protocols.

As the coronavirus case load surpassed 5,000, Texas Gov. Greg Abbott on Tuesday urged residents to stay home and said the state would crack down on overcrowding in some restaurants and bars. On Thursday, Abbott announced the phased-in reopening plan would be paused temporarily, and he asked residents to do their part by wearing masks, washing hands and keeping socially distant.

"The last thing we want to do as a state is go backwards and close down businesses. This temporary pause will help our state corral the spread until we can safely enter the next phase of opening our state for business," Abbott said in a statement.

Some California counties are applying civil penalties. Last week Monterey County’s District Attorney announced The Tuck Box restaurant in Carmel-by-the-Sea has agreed to pay up to $35,000 in a settlement as a result of violations that included opening for dine-in service before it was allowed, lack of social distancing and employees failing to wear masks.

A growing number of restaurants across the country are now “reclosing” for dine-in service — including temporary restaurant closures because an employee tested positive, and closures as a proactive step to avoid that scenario.

The Katy, Texas-based chain Kolache Factory, for example, said Wednesday it would immediately shut down its dining rooms and restrooms at its 27 corporate-owned locations in Texas, Kansas and Indiana, shifting back to takeout, curbside or drive-thru service only. The dining rooms had closed on March 16 for dine-in and reopened June 12 at 50% capacity.

“With the surge we are seeing right now in our country, we are taking the pre-emptive step of shutting down dining rooms at all corporate-owned locations, so we can protect our customers and employees as much as possible, encourage social distance and continue serving our communities fresh-made kolaches,” said Dawn Nielson, the chain’s chief operating officer, in a statement. “We understand this is a scary time, but we are committed to doing our part to protect one another and our economy.”

The Texas Restaurant Association this week attempted to address growing concern about restaurant safety by launching the Texas Restaurant Promise Certification Program. Restaurants and bars that “have gone above and beyond” the minimum state guidelines for safety are asked to post a verified decal as an indicator to guests.

To earn a decal, at least five employees must complete training programs and the restaurant must undergo a third-party evaluation, as well as submitting to a mystery shopper to ensure protocols are being followed.

A similar program was launched this week in South Carolina, where Gov. Henry McMaster said he has been disappointed with lack of compliance with regulations, in particular wearing masks and social distancing — though some cities, like Greenville, have mandated mask wearing in public.

To reward restaurants that promise to follow safety protocols, McMaster unveiled the Palmetto Priority Seal, a decal for restaurants to display in their window. Restaurants that make the promise undergo either a virtual food safety check or inspection, and they commit to meeting certain minimum standards, such as all employees wearing face masks, sanitation and social distancing.

There are still a number of states and jurisdictions where dine-in service is only just starting to come back. Washington, D.C. and Massachusetts restaurants reopened for dine-in service this week, and Seattle began a gradual reopening last week. New York City opened for outdoor dining only.

But in Boston, for example, the city Licensing Board reportedly called a mandatory virtual meeting on Wednesday for business in the North End after receiving numerous complaints about safety and other violations while the city was in the outdoor-dining-only phase. The board warned that it would conduct random inspections and threatened to take disciplinary action against violators.

In Chicago, the Phase 4 of recovery scheduled to begin June 26 will allow restaurants to resume indoor dining at 25% capacity, or no more than 50 diners at a time. Parties are limited to no more than 10 per table, and counter or bar seating is only allowed if six-foot distancing can be maintained, or plexiglass can be used between customers and bartenders. At cafeterias, buffets or self-serve outlets, food must be served by an employee wearing protective gear.

Among the guidelines is the requirement that both employees and guests (while not seated) wear face masks. Illinois is among a growing number of states that have adopted stricter face mask mandates, including Washington state, California and New York.

The face mask issue has become increasingly political, despite the fact that health officials say face coverings are crucial to preventing spread of the virus. Masks are recommended in restaurant reopening guidance from the Centers for Disease Control and Prevention.

Attorneys, however, note that — even without a law or government mandate — restaurants can require guests and employees to wear masks as a matter of policy.

There are some grey areas, notes Arif Virji, managing partner of the law firm Kaufman Dolowich & Voluck in San Francisco. Restaurants should accommodate guests with a disability, for example, such as a breathing difficulty or if someone is prone to panic attacks. Those situations should be handled on a case-by-case basis, he said.

Some guests, however, may see not wearing a mask as a First Amendment right but Virji said that’s the weakest argument. People are not free to yell “fire” in a theater because it could cause harm, he noted, and restaurants could argue that a guest not wearing a mask also creates an unreasonable risk of harm to other guests and employees.

It’s a health issue, he said. “The First Amendment doesn’t give you the right to be an idiot.”