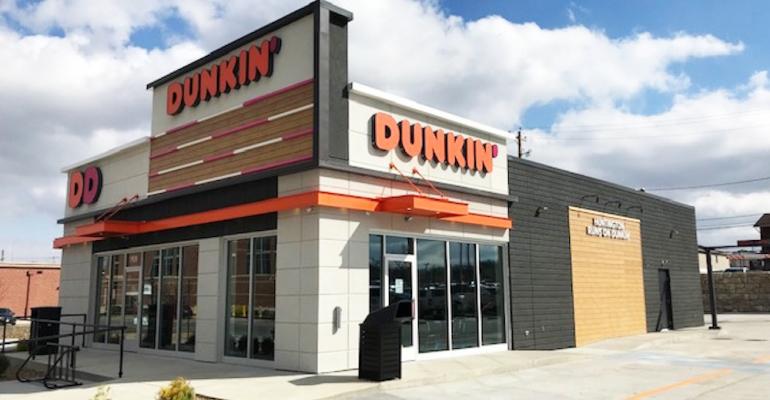 Doughnut kits and late-morning treats appeal to guests during pandemic

“America runs on Dunkin’” has long been a tagline for the quick-service chain that for decades has fueled its customers with smooth, consistent cups of coffee in the morning, along with doughnuts, muffins and the occasional breakfast sandwich.

But much of America isn’t in any particular rush at the moment. With many people out of work, and many others working from home as we endure the coronavirus pandemic, that morning rush-hour commute that was Dunkin’s bread and butter isn’t happening.

So the chain of more than 9,600 restaurants across the country is adapting to its guests’ new needs, and president Scott Murphy said he’s optimistic about the summer.

“I think we’re in relatively good shape,” he said.

Related: How 24 restaurant companies performed in their latest quarters as coronavirus restrictions swept the U.S.

At the end of April, 1,000-1,200 of the domestic units had closed completely, including 300 locations in New York City, the epicenter of the pandemic and a city without drive-thrus. But now 93% to 94% of restaurants are open for takeout, drive-thru, delivery and curbside pickup (a new option for the chain) but none of them are open for dine-in yet.

“There’s a lot of noise around the industry about allowing dine-in,”  Murphy said. “The good news for us [is that] the bulk of our business was takeaway anyway, pre-COVID.” In fact, even with the collapse of morning traffic, Dunkin’ same-store sales at their lowest were down by around 30%, and they’re back up to a decline of 20%-25%.

Murphy said that for most franchisees, that’s well above the break-even point. He said that, depending on their debt structure, the terms of their lease and other factors, most franchisees, if they got a Paycheck Protection Program loan, “could probably survive and still be profitable at, call it down 50%, but that’s an average store and there are people on either side of that.”

He said they might open a few dining rooms in June in states with fewer restrictions, “but we’re doing it very cautiously, and deliberatively.”

Their approach would be to open a handful of stores and monitor them for a couple of weeks, talking to customers and crew members, “to make sure both groups feel safe doing this,” Murphy said. “We’ve got our food-safety experts teed up. We’re using a lot of Facetime video, watching stuff and monitoring to make sure that we’re adhering to all those [safety] standards.”

That includes social distancing, following the new cleaning protocols, making sure the plexiglass barriers in front of the cashier are holding up and crew members are using gloves and masks properly.

“It is a lot of work for these crew members,” Murphy said. “My heart goes out to them because we’re changing a lot of what they do, and it’s a big responsibility.”

There’s also a question of whether it makes financial sense to allow seating in dining rooms.

With requirements that customers have to stay six feet apart, that might mean just having a few chairs in each restaurant.

“Does that even make sense? Do people even want to sit down, or are we better off using that space for proper flow, for people to come in and get their mobile order and then leave?” Murphy said.

In the meantime, the chain is adapting to its customers’ changing needs. That 6 a.m. to 9 a.m. rush might be gone, but now customers are coming to the drive-thru between 10 a.m. and 2 p.m., with a particular uptick from 11 to 1.

And when they do go out, they buy more, Murphy said.

That could include the decorate-your-own doughnut kits that the chain introduced at the beginning of the month, that Murphy said is a “sleeper hit.”

The kits feature plain doughnuts, a variety of frostings and sprinkles for around $5.99 for four and $9.99 for 9. Murphy said around 3,000 restaurants are selling them.

“You can bring it home and entertain your kids while you get on your Zoom call, so that’s been a huge hit for us,” Murphy said, adding that they also have played great on social media.

The kits are easy for franchisees because all of the ingredients are in-house and they can be assembled ahead of time.

So can pre-packaged doughnuts by the dozen, which franchisees are assembling and stacking at their drive-thrus.

“Usually picking out your doughnuts is your most important activity when you’re a consumer,” Murphy said, but now they’re leaning toward the hassle-free boxes that seem safer since no one’s been touching them.

“They’re a great, ironically, impulse buy. Normally a $10 dozen doughnuts is not an impulse buy, but when you’re on a Dunkin’ run to get out of your house and then you can come back and be a hero, that’s actually working quite well for us,” Murphy said.

The new mid-day-break daypart — which of course coincides with lunch, but customers treat it differently — is also drawing customers who hadn’t considered Dunkin’ for anything but breakfast, and so they’re discovering the chain’s stuffers and other lunchtime items.

Murphy said all of that bodes well for the summer, when he anticipates the chain will benefit from pent-up demand for its iced beverages.