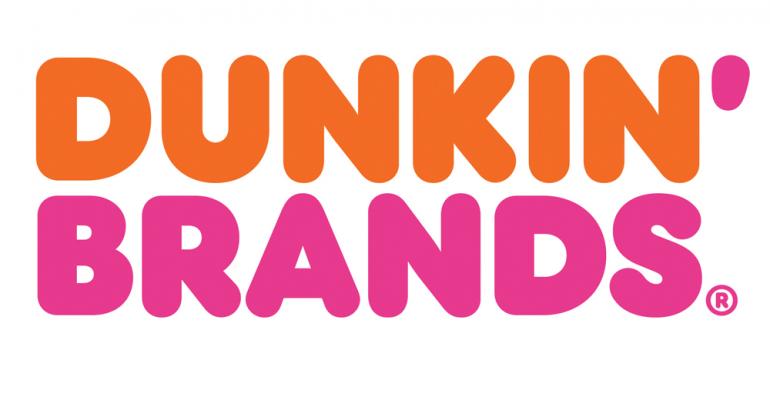 Parent of Dunkin’ and Baskin-Robbins offers relief for franchisees, gloves and masks for staff

Executives at Dunkin’ Brands Group Inc., the parent of the Dunkin’ and Baskin-Robbins chains, have learned during the COVID-19 pandemic that they can act more quickly than they realized.

“We’ve chosen to do what was timely over what was flawless,” CEO Dave Hoffman said in  a conference call announcing quarterly earnings, underscoring the need to protect franchisees’ team members and customers as the virus spread.

“Our response to COVID started early based on lessons learned from what we were seeing abroad,” Hoffman said. “From day one our goal, our duty, our obligation has quite simply to do the right thing. Nothing is more important to us than safety.”

Tables and chairs were removed as the entire system converted to drive-thru and takeout, and floor tiles were marked with six-foot increments to encourage social distancing by customers. They also suspended the chain’s refillable mug program and encouraged contactless payment via the chain’s mobile app, which Murphy said enjoyed nice growth in number of users.

Infrared thermometers were distributed to all domestic locations in the past week to monitor employee health, Hoffman said.

Murphy later told Nation’s Restaurant News that being aligned with franchisees helps the system to act quickly, so he has conference calls twice a week with 1,200 franchisees to go over plans for the next five days.

He said that helped them implement changes to their mobile app, such as enabling ordering for curbside pickup at the 1,000 or so locations that have introduced that.

“You can describe what your car looks like so the store knows when you’re there,” he said. “That’s something we did in probably 10 days.”

They also upgraded the app to make it easier for franchisees to update their new hours — most restaurants in the country are now closed by 7 p.m. in the face of traffic declines — and to push those new hours to third-party delivery services, which are now being used by around 4,000 locations, up from 2,000 locations before the pandemic struck.

With increased traffic at drive-thrus, “we found ways to speed up when an order is fired in the restaurant from when it’s placed,” Murphy said.

Around 90% of the chain’s 9,637 domestic locations have remained open during the pandemic, with most of the closures being at transportation hubs and in dense population areas, including New York City, where some 300 locations closed.

Murphy said the breakfast sales slump was partially offset by increased traffic between 10 a.m. and 2 p.m. “as people venture out for a break.”

Baskin-Robbins was hit even harder with a 23.3% drop in the last three weeks, but still ended the quarter with comps up by 1.8% thanks to 11% growth in the first ten weeks of the quarter.

In order to help cope with the declining sales, the parent company extended payment terms on royalties and advertising fees, as well as rent at the 900 corporate stores that the company controls. It also is being flexible in terms of capital expenditures such as remodels, new equipment and new restaurants.

Additionally, management of the company based in Canton, Mass., provided guidance in terms of how to apply for CARES Act loans and created tools to help franchisees track their uses of funds to stay within federal guidelines that would allow those loans to be forgiven.

Hoffman stressed that, although franchisees applied for and received the Paycheck Protection Program loans mandated in the federal CARES Act, the parent company did not and didn’t plan to.

Other chains have received such loans and many have returned them after public outcry that the loans were intended for small business owners, not large corporations.

Murphy and his team also have paused some limited-time offers that were more operationally complex, and gave franchisees options for pared-down menus, including an “Essentials” menu  that includes hot and iced coffee, espresso and bakery items such as bagels, muffins and doughnuts as well as pre-packaged items like K-Cups, but no sandwiches or other savory items, or frozen beverages.

He also said the limited menu could help restaurants that have closed to gradually ramp up when the time comes to reopen.

Some menu introductions have remained in place, however, including two new Croissant Stuffer sandwiches that appeal to customers in late morning and early afternoon.

Although sales were down at the restaurants, which are almost all franchised, revenue for the company was up by $4.1 million, or 1.3%, to $323.1 million, over the first quarter of 2019, due mostly to increased retail sales of ice cream and other products, as well as bagged coffee and K-Cups as supermarket traffic has increased.

Internationally, about half of the restaurants for both brands are currently closed, and revenue for Dunkin’ International was down by 20% to $5.5 million. However, a net 23 new restaurants opened in the quarter, giving that division a total of 3,530 locations.

“As we continue to serve our guests during this crisis, we are also focused on ways to quickly bring back morning rituals in the post pandemic world,” he said during the earnings call. “We believe our high-frequency, low touch, affordable ticket business model will serve us very well in the new reality.”