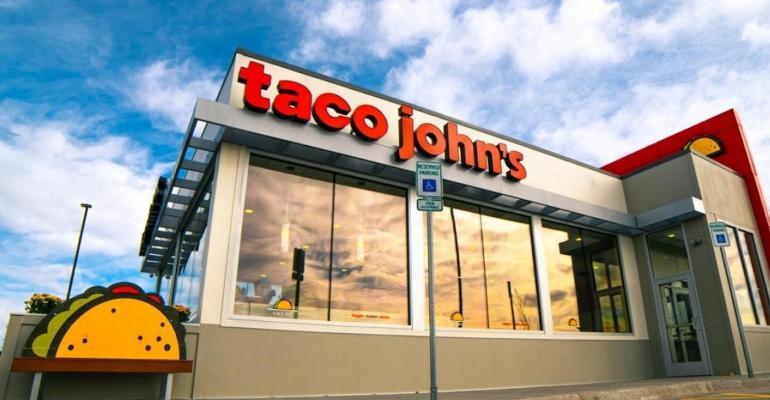 While it might be tempting to compare the growing mid-sized brand to its national competitors, Taco John’s is carving out a corner of the market share all on its own with innovative menu items and a brand refresh as the mainly Midwest chain looks toward the future.
News>Regional Chains

Taco John’s is undergoing a brand makeover, expanding to new regions, and enticing fans with carnitas quesadillas and other fresh menu items

One of the upcoming menu items currently being tested out at Taco John’s — the 370-unit, Wyoming-based “West-Mex” quick-service chain — is a flat, crunchy tostada topped with shredded, lettuce, pico de gallo, and two types of cheese. It reminds us of a more refreshing, remixed version of a Mexican pizza from that other quick-service Mexican chain.

But while it might be tempting to compare the growing mid-sized brand to its national competitors, Taco John’s is carving out a corner of the market share all on its own with innovative menu items and a brand refresh as the mainly Midwest chain looks toward the future.

NRN recently visited the new second headquarters of Taco John’s in Minneapolis, Minn. where a rebranding of the company is underway.  From new colors that will dominate the upcoming store designs (a cheery red, green and yellow), to a stronger emphasis on menu innovation and technology investment, the Taco John’s makeover signifies the company’s path forward into new markets and stomachs.

“The most important thing for us next year is opening new stores,” president and CEO Jim Creel said. “That’s where our focus is, but you also have our rebranding coming to older stores, and we’re bringing in new customers with digital marketing to get the word out about these new markets we’re entering.”

Taco John’s is planning to open about 80 stores over the next three years, bringing its total portfolio to 450 stores. There are already 22 restaurants slated to open in 2023, mainly in the Grand Rapids, Michigan area, Louisville, and Milwaukee. Opening the second headquarters in Minneapolis (with the first being in Cheyenne, Wyoming), was the first step at making Taco John’s more of a national name, even if they’re still mostly concentrated in the middle of the country.

“We wanted our brand to be the first quality value brand in Mexican quick-service,” Taco John’s CMO Barry Westrum said. “We’re delivering products at only a few dollars that feature higher quality ingredients and premium proteins like real smoked carnitas. […] Quality proteins really represent our bigger, bolder strategy that’s part of the future of food innovation for our brand.”

The third prong of the development strategy for Taco John’s is technology investment, specifically investing in tech and equipment that will help with labor strain and improve turnover. The company recently switched to a new cloud-based POS system with Qu, and will be slowly turning over all POS to the new system over the next year. With the new POS, there will be a renewed emphasis on digital engagement and mobile orders. The company is also investing in new kitchen technology that will make cooking more comfortable for employees.

“Our older kitchens had steam tables and the kitchens were a lot hotter, and not as comfortable to work in with this new kitchen,” Creel said. “Fighting for employees like everybody is right now, we have to do everything we can to attract them[…] while fast food might have he reputation of attracting kids in high school or college that just want to get money to get through school, a lot of people want to make a career out of it, so we want to bring them into a store that’s more modern.”