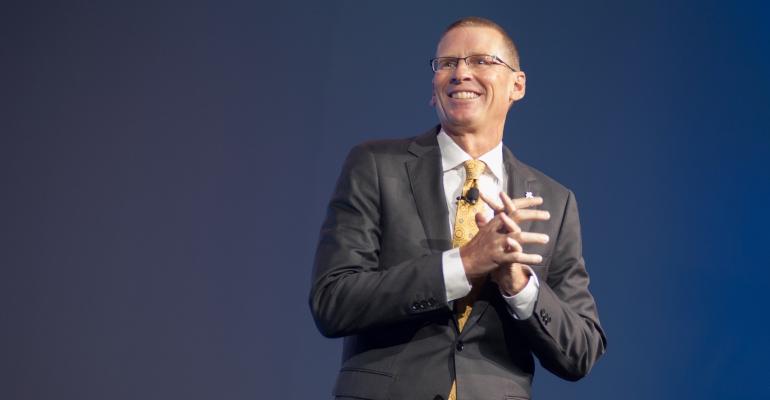 The Wendy's Co.
Todd Penegor, Wendy's CEO and president, outlines the company's strategy to reach as many as 9,000 units by 2025.
News>Quick Service

The Wendy’s Co. has been highlighting non-traditional development in its expansion plans, including a 700-unit delivery-kitchen deal announced this week with REEF Technology, and that growth includes limited brand extensions in Walmart units.

The Dublin, Ohio-based burger brand last week opened a new Hamburger Stand unit in a Heath, Ohio, Walmart and plans a Wendy’s Snack Shop format later this year in another Walmart in Ohio.

Todd Penegor, Wendy’s CEO and president, said in an interview Thursday that the Hamburger Stand has a more limited menu than a traditional stand-alone restaurant.

1st in the world - Wendy’s Hamburger Stand. One of its kind restaurant concept located in the Heath Walmart @HeathOhio @Wendys @Walmart pic.twitter.com/tRvakJXx4I

The Walmart unit, he said, “is just another opportunity to have access to our brand where the consumers are our shopping.”

“It's just another opportunity with a little more limited menu to continue to provide access to our brand,” he said. “We do think access drives awareness; awareness drives trial and repeat; and that really drives frequency overtime. So that's part of our strategy moving forward.”

McDonald’s Corp. over the past year has closed more than 200 of its units in Walmart stores.

“If you want to find a strawberry Frosty,” he said, “you can only find it today in the in the Hamburger Stand restaurant. And we’ve got this unbelievably great Jalapeno Popper Chicken Nugget that in that restaurant that isn't in our freestanding restaurant.”

The planned Snack Shop also will be simplified, he said, with fewer items and no salads or baked potatoes.

The development of non-traditional sites, including a Frosty Cart at the Tampa Zoo in Florida, and other franchising initiatives have led Wendy’s to raise its growth targets.

Penegor, who has served as CEO since 2016 after joining the company as chief financial officer in 2013, said deals like the 700-unit REEF Technology agreement for Canada, the United Kingdom and the United States have led the company to increase its development goal from 8,000 restaurants by 2025 to 8,500 to 9,000. The company has more than 6,800 units now and expects to have 7,000 systemwide by the end of this year.

“Over the next four or five years,” he said, “we're probably going to be doing about 40% to 50% of our new-unit development in non-traditional.”

The REEF agreement, Penegor added, is “a great move for us because we're super underpenetrated when it comes to urban locations.”

Wendy’s has had eight delivery kitchens with REEF since fall 2020 in the Toronto area.

“They performed really well,” Penegor said. “What we do get it — and what we really like about it — is the more that a consumer has access to the Wendy's brand through even delivery it does halo back to all of our freestanding restaurants.”

Wendy’s has also primed its development pipeline with a “Groundbreaker Incentive” program and a $100 million “Build-to-Suit” platform.

Wendy’s refinanced earlier this year, Penegor said, and that left the company with some additional cash on its balance sheet, which led it to create the Build-to-Suit program.

“We pay for the building,” Penegor explained, “and the person doing the Build to Suit program pays for the equipment, the signage. We get a little higher royalty rate to recoup our investment.”

Part of the program’s intent is to increase diversity among Wendy’s franchise base by requiring lower liquidity and net worth for candidates.

The intent, he added, was “to recruit even more diverse franchisees” into the system.