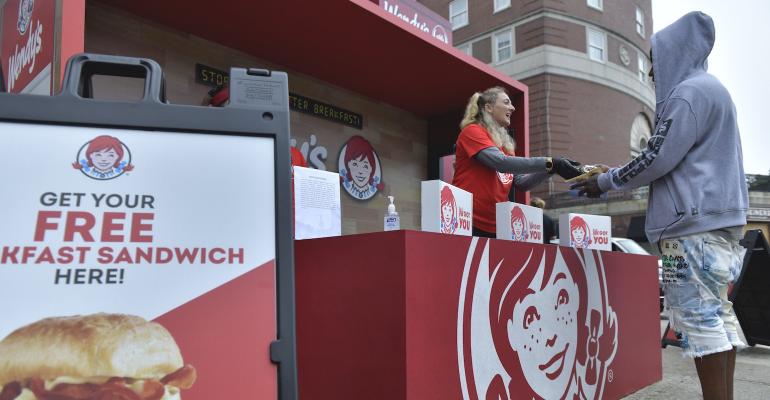 The Wendy’s Co., which is into its second year of systemwide breakfast, highlighted a new meal deal promotion Wednesday with a bus-stop giveaway in Providence, R.I., that was aimed at building awareness.

The Dublin, Ohio-based quick-service brand, which launched breakfast systemwide in March 2020 right before the COVID-19 pandemic was declared, has been working to build awareness for the new daypart since communities began opening up.

The bus stop pop-up in Providence’s Kennedy Plaza was part of the company’s $15 million effort this year to wedge Wendy’s into consumers’ daily habits. It also launched a new systemwide meal deal of two select breakfast sandwiches — a choice of Sausage, Egg and Swiss Croissant; Bacon, Egg and Swiss Croissant; or Honey Butter Chicken Biscuit — for $4 through early August.

The company said the July 14 pop-up giveaway was “part of a larger competitive breakfast takeover in the Providence market, dubbed #DitchTheDonut.” The promotion included bus-cling and billboard advertising and a sweepstakes at Instagram’s @DitchTheDonutSweeps through Aug. 13. The sweepstakes award of “breakfast for a year” will be in the form of $550 in Wendy's gift cards.

While Wendy’s was about to build some awareness during the first quarter, when many communities still faced COVID restrictions and fewer people were commuting to work.

“What we need to do is continue to get folks to come in and try our food,” Penegor said on that call. “And we're confident as mobility, especially in the morning, comes back even more and more. And we start to get into those morning routines again later this year and into 2022, that can really help people to habit of Wendy's for breakfast in the morning.”

“We’ve got to continue to create awareness to bounce those folks back from lunch and dinner into breakfast, which then drives incrementality to our business, because it’s another visit, another frequency that gets picked up along the way,” Penegor said, adding that the brand is investing $15 million to drive awareness this year.

“Awareness leads to trial,” he said. “Trial leads to repeat trial, and the repeat leads to growth.”

At the end of the first quarter in March, Penegor said the breakfast business in its first year was ahead of the company’s plans.

“We have now officially entered our second year of breakfast,” he said, “and we could not be more excited. And the same sentiment is echoed by our franchisees as their energy and excitement is at an all-time high. In the first quarter, all our key breakfast metrics improved. Breakfast sales dollars grew, awareness increased and we continue to see higher customer repeat.”

The 300 legacy breakfast restaurants, which had retained the daypart after earlier trials, had grown breakfast businesses to more than 10% of total sales, Penegor said, “giving us confidence in our long-term targets.

“Our results in the quarter were ahead of our expectations,” he said. “And we remain fully committed to our breakfast advertising investment, putting us in a great position to grow our breakfast sales by 30% in 2021 and reach our goal of 10% of sales coming from breakfast by the end of 2022.”

In the first quarter, systemwide breakfast sales were about 7% of the total tally.

Some pockets of Wendy’s markets had been slower to recover, he said, with half of people still working from home and offering less mobility in the mornings.

“Our biggest opportunity, and we're starting to see this start to play out, is really getting our existing rest-of-day Wendy's customers to try our breakfast business,” Penegor said.