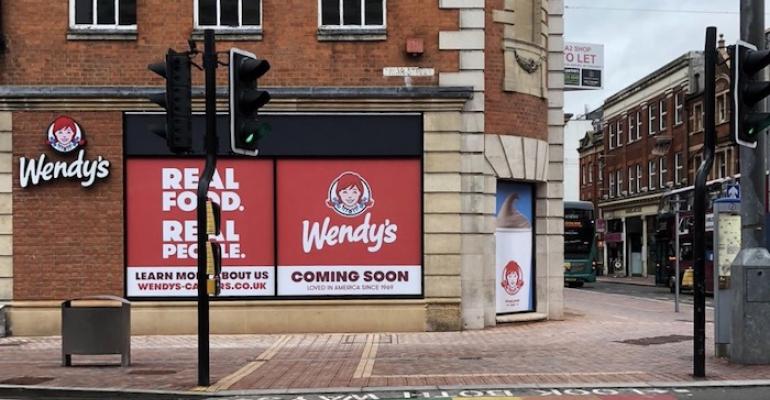 The Wendy's Co.
Wendy's plans to return to the United Kingdom market after more than 20 years with an opening in June.
News>Quick Service

The Wendy’s Co. will make its return to the United Kingdom in June with the opening of its first restaurant there since it exited the market in 2000, company executives said Wednesday.

The Dublin, Ohio-based burger brand, which released first-quarter earnings Wednesday, said the company-operated restaurant is on track to open June 2, marking the company’s return after it pulled out of the United Kingdom and several other countries more than 20 years ago. The location is planned for Reading.

“The U.K. consumer seems to be ready for us,” said Gunther Plosch, Wendy’s chief financial officer, in an earnings call. About 20 potential franchisees have expressed interest, the company said. He said the United Kingdom has the potential for 400 restaurants, and the company is investing toward that goal.

International development continues as one of three pillars for Wendy’s growth, with the expanding the digital business and building the breakfast daypart, which went systemwide a little more than a year ago.

“We have now officially entered our second year of breakfast, and we could not be more excited,” said Todd Penegor, Wendy’s CEO and president.

“In the first quarter, all our key breakfast metrics improved,” he said. “Breakfast sales dollars grew, awareness increased, and we continue to see higher customer repeat.”

Breakfast held steady in the sales mix for the first quarter at about 7%, Penegor said, and some legacy breakfast stores that had reached 10%, which he said gave him confidence in long-term targets for breakfast.

Marketing, such as that around March Madness, and a 2-for-$4 promotion helped fuel the breakfast business, Penegor said.

“Our results in the quarter were ahead of our expectations,” he said, “And we remain fully committed to our breakfast advertising investment, putting us in a great position to grow our breakfast sales by 30% in 2021 and reach our goal of 10% of sales coming from breakfast by the end of 2022.”

“Our digital business grew to approximately 7.5% of sales in the quarter,” Penegor said. Internationally, digital sales grew to more than 10% of sales, which the company credited to increases in the Canadian delivery business. In the United States, Wendy’s exited the quarter with digital reaching about 8% of sales, up from 6% in the fourth quarter.

“This growth has been driven by increases in both delivery and mobile ordering,” Penegor said. The company has a goal of reaching 10% of U.S. sales coming through digital channels by the end of 2021.

Revenues reflected, in part, an increase in “higher franchise fees primarily as the result of the company's new technology fee that was implemented in 2021,” Wendy’s said.