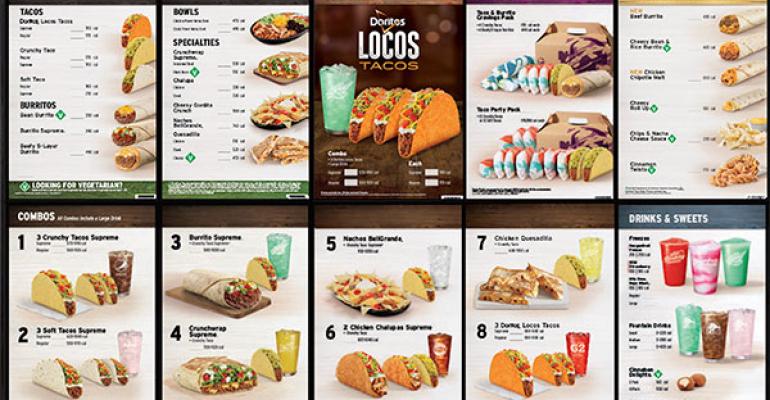 Taco Bell
Taco Bell announces the trimming of more menu items, including the Mexican Pizza and any item made with shredded chicken. The protein is coming off the menu Nov. 5.
News>Quick Service

On the chopping block for this round are Mexican Pizza, shredded chicken items and Pico de Gallo; Fresca Style ordering tweaked, and new $1 menu item coming

Taco Bell is downsizing its menu once again.

The latest trims are part of the brand’s effort to streamline the menu to make room for new innovations and offer customers speedier service. Menu decluttering began last year when the company removed nine items from the menu, including two Doritos Locos Tacos flavors. When the items are removed Nov. 5, Taco Bell will have scrapped more than 25 items and ingredients from its menu since streamlining began last year.

“We’re constantly evaluating ways to provide a more efficient restaurant experience, and have already begun to see progress from streamlining our menu,” Mike Grams, brand president and global chief operating officer, said in a statement. “While we know fans may be understandably sad to see some of their favorites go, this evolution of our menu truly paves the way for fresh new ideas.”

Pico de Gallo, a widely used accoutrement of diced tomatoes and onions, was typically used when consumers asked for their food to be made “Fresco Style” to reduce calories or to make a certain menu item vegan.

The chain said this is the last menu tweak of the year.

“We want to reassure our fans that this is the final phase of our 2020 menu revamp,” the company said. “With these changes, we look forward to providing our guests with a more seamless Taco Bell restaurant experience, and even more exciting new innovations to come.”

The company said two items previoulsy removed from in-store menu boards can still be ordered in creative new ways. The Quesarito is available through the brand’s digital ordering channels; and the 7 Layer-Burrito, eliminated from the menu in August, can easily be recreated through customization on the Taco Bell app or website.

“You never know what fan favorites you can recreate,” the company said.

In eliminating the Mexican Pizza, the brand said eco-conscious fans might be heartened to learn that getting rid of the item will help Taco Bell in its effort to “leave a lighter footprint on our planet.”

“Currently, Mexican Pizza packaging accounts for over 7 million pounds of paperboard material per year in the U.S.,” the company said.

For example, the brand plans to test a new green sauce, an ingredient that was on the menu previously. The new and improved recipe, made with fire roasted green chilies, pureed jalapeño and hatch green chiles, will return to select markets Nov. 5.

On Sept. 24, Taco Bell restaurants in Knoxville will be selling the Quesalupa, which will return to nationwide menus next year, the company said.

“The creativity and innovation in our kitchen hasn’t slowed down at all, and we look forward to rolling out new fan favorites.”