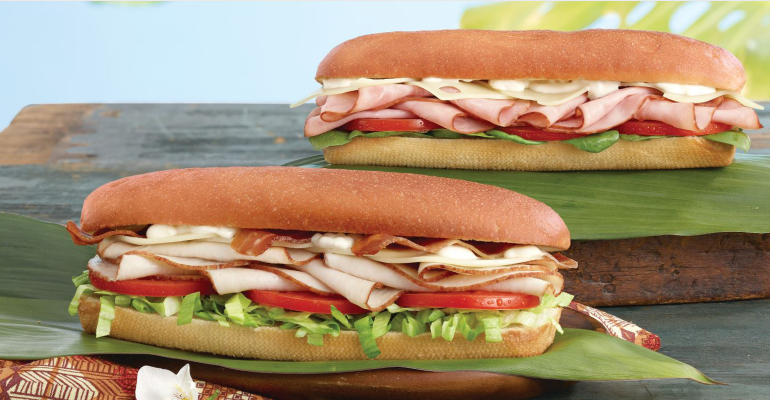 A new bread choice at Subway is common, but a new size?

The world’s largest restaurant company, by units, said it is testing an 8-inch sandwich made with King’s Hawaiian bread in three U.S. markets. The Milford, Conn.-based company said Subway “will be the first brand ever to bake the signature bread fresh in its restaurants.”

The bread will be available for a limited time starting June 27 in more than 300 restaurants throughout Champaign, Ill., Reno, Nev., and Richmond, Va.

When customers enter these test stores, they ask a sandwich artist (the employee assembling the sandwich) to make their order “Aloha Style.” That will tip off the employee to make the sandwich from the sweet, custom hoagie-style bun made by King’s Hawaiian and finished off in the stores.

Because the bread is 8 inches long, sandwiches will have a deluxe portion of meat and double the cheese of a typical 6-inch sub, Subway said.

“These new sandwiches are unlike anything out there, and Subway is offering guests a chance to try this iconic bread like they never have before — freshly baked,” said Len Van Popering, Subway’s newly appointed chief brand and innovation officer, in a statement. “We’re excited to be the only restaurant in the world trusted to serve King’s Hawaiian bread this way.”

Mark Taira, CEO of King’s Hawaiian, said the partnership with Subway is unique for the Torrance, Calif.-based bread company.

“It’s a unique and exciting opportunity for us to work together with Subway to bake fresh King’s Hawaiian bread in restaurants every day,” said Taira in a statement. “Subway’s commitment and love for baking fresh bread matches our own, and we look forward to guests being able to enjoy our joint passion.”

The test in Illinois, Nevada and Virginia will run from June 27 to Sept. 4.

The King’s Hawaiian partnership comes as Subway has spent the past year revamping stores and adding new ingredients and flavors to its menu.

Van Popering was promoted to the new company role of chief brand and innovation officer last week as part of the chain’s global transformation plan. That turnaround includes adding new and “craveable” sandwiches and ingredients to the menu such as the Ultimate Cheesy Garlic Bread and the Signature Wraps Collection, Subway said.

Van Popering also spearheaded the recent partnership with food media brand Tastemade, which is collaborating with the company to produce and market new sandwiches.