In its quest to modernize its aging U.S.-based stores, Subway is launching an $80 million merchandising program that showcases the company’s latest culinary innovations, as well as new uniforms and menu boards.

The Milford, Conn.-based sandwich chain is paying for half the program, while the other $40 million is being funded through existing vendor partnerships (Coke and Frito-Lay) and advertising funds. Franchisees, who pay into the ad fund, will not have to spend additional fees for the upgrades, said James Walker, Subway’s vice president of North America.

Walker, who has been trotting around the country meeting franchisees over the last 60 days, said Subway is accelerating the Fresh Now program after seeing an “overwhelmingly positive” response in test markets.

The brand’s 26,000 domestic restaurants are expected to adopt the Fresh Now program by summer 2019.

Fresh Now is part of the company’s focus on increasing profitability for its franchisees under a rejuvenation plan that includes relocating restaurants to better locations, modernizing stores and adding a pipeline of flavorful new ingredients and menu items. 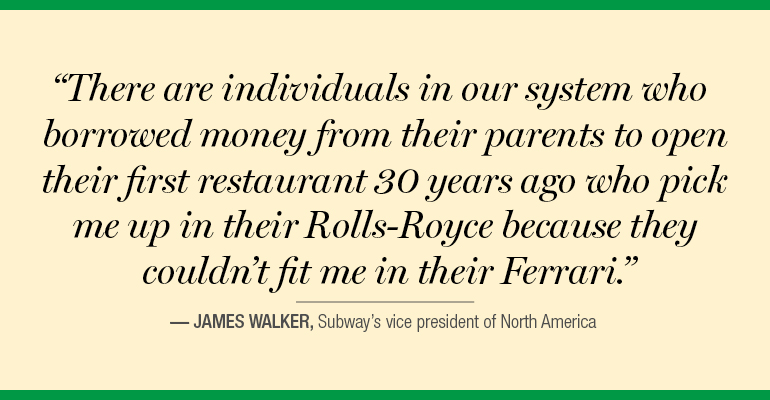 Other region-specific flavors are being considered in specific U.S. markets such a spicy habanero mayonnaise in Southern California and a citrus oil dressing in Miami.

Some food innovations in the works will be more widespread after testing.

“There will be a tsunami of new products,” Walker said.

In Southern California, some Subway restaurants are experimenting with breads baked in different ovens, including a crispier Dutch crunch roll, also known as a tiger bread.

Internally, the company is also taking a divide-and-conquer approach. North America is now split into three regions with a “country director” overseeing operations in the West, East and Central markets. Walker said it was a crucial change, as Subways in Seattle face much different issues than those in Maine, or the Midwest, especially when it comes to labor and real estate costs.

“This new regionalized approach allows us to compete much more aggressively,” Walker said during a recent interview at a remodeled store in Aliso Viejo, Calif.

Walker said the regionalization effort is not a huge shift for the company.

“I look at it more as layering additional elements to allow us to gain an unfair competitive advantage,’’ he said.

Walker, a former Baja Fresh and Johnny Rockets executive, has spent the last 60 days traveling around North America — from Vancouver to North Carolina — listening to franchisees. Interim CEO Trevor Haynes has joined him on the road a few times.

But instead of being on stage, Walker typically meets a group of 12 to 24 franchisees in the back office of a Subway.

Walker tells them his priority is to increase their profitability. 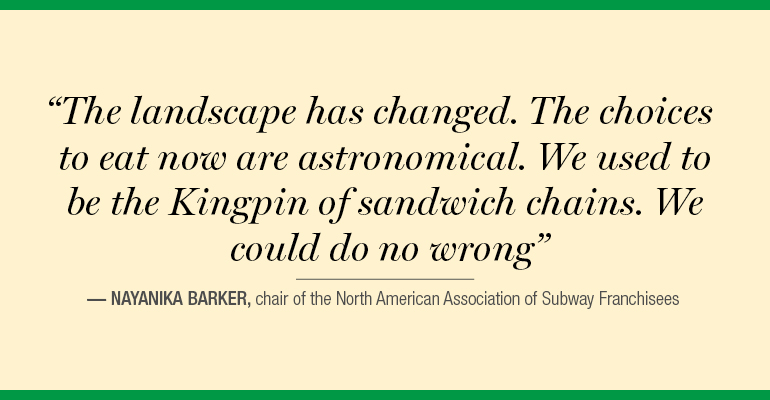 To achieve market dominance again, Walker said it is vital for the company to work closely with franchise partners like Nayanika Barker, chair of the North American Association of Subway Franchisees.

She, like Walker, agrees that modernizing stores is needed amid a challenging restaurant environment.

“The landscape has changed. The choices to eat now are astronomical,” said Barker, who owns two Subways in the San Fernando Valley in greater Los Angeles. “We used to be the Kingpin of sandwich chains. We could do no wrong.”

The new look includes modern furniture, outlets for mobile devices, shelving for takeout and delivery orders, new flooring, and a sandwich assembly line that showcases the company’s fresh produce in open bins like a grocery store. Some stores also have kiosks for self-serve ordering.

“We have to do things like refreshing the look to make sure we’re on top of the guest experience. Otherwise, they’ll find somewhere else to eat, and we can’t have that,” Barker said.

Adoption of the new look can lead to sticker shock.  New, ground up restaurants with the contemporary decor cost between $200,000 and $300,000, depending on the market.

To help franchisees, Walker said Subway recently introduced the less expensive version of the remodel dubbed Fresh Start. The reduced cost of $40,000 will “allow us to accelerate the implementation” of store modernizations, he said.

So far, two stores have adopted the financially approachable remodel at locations in Connecticut and Washington D.C.  Walker said the tweaked version includes a floor overlay (instead of ripping up and replacing existing flooring), Subway’s 2-year-old redesigned logo, and new wall artwork.

“It is an affordable and viable option for me,” she said.

Walker said he’s heartened when he talks to franchisees like Barker.

As he travels around the country, he said Subway partners remain passionate about the brand. Most love to regale him with their rags-to-riches story.

“There are individuals in our system who borrowed money from their parents to open their first restaurant 30 years ago who pick me up in their Rolls-Royce because they couldn’t fit me in their Ferrari,” he said.

Walker said his mission is to ensure the next generation of Subway operators experiences that same entrepreneurial success.

“I didn’t come to Subway to be No. 2 in anything that we do. When the competition is so far back in our rear-view mirror — and we don’t have to look at it anymore — that’s what we are focused on,’’ he said.