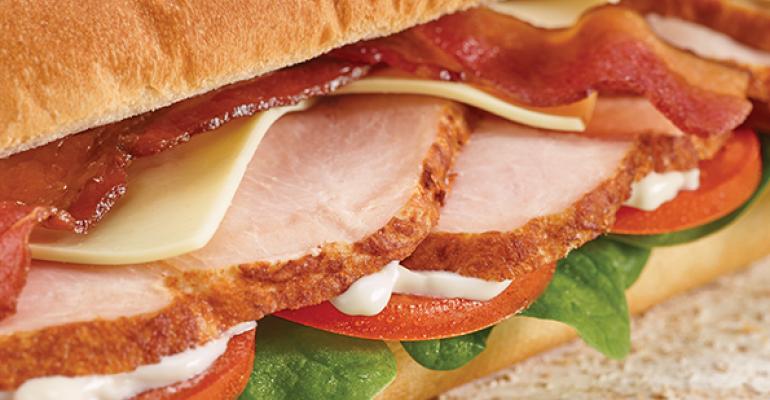 Subway to roll out new Carved Turkey next week

In the next step of its ongoing move toward more-premium ingredients, Subway on Monday is scheduled to roll out sandwiches with a new carved turkey breast and applewood-smoked bacon.

The move follows the rollout earlier this year of rotisserie-style chicken across the chain’s 27,000 domestic units, which was Subway’s first protein raised without antibiotics.

By the end of the year, the new carved turkey will also be antibiotic free. But the thickly sliced breast meat is free of artificial colors, flavors and preservatives, in keeping with Subway’s pledge to remove artificial ingredients from its sandwiches, soups and cookies by the end of 2017.

The two new ingredients will be featured in a Carved Turkey & Bacon Sub on toasted Italian bread with American cheese, fresh vegetables like spinach and tomatoes, and mayonnaise for the recommended price of $5.25 for a six-inch sandwich and $8.75 for a Footlong.

A Carved Turkey Breast sandwich with trimmings will also be featured as part of the Fresh Fit better-for-you collection, with a six-inch sub under 350 calories. The recommended price for that sandwich is $4.75 for a six-inch and $7.75 for a Footlong.

The new ingredient, which is more like the slices of turkey that might come from a whole oven-roasted bird, will open up the menu for more innovation, he said, like a potential holiday-season sandwich to come later this year that might include cranberry.

Subway also announced earlier this week that it will list calories on all U.S. menu boards by April 11.

Coming to Subway’s menu as regional limited-time offers in some markets in June: An Italian Hero with more-premium Italian cured meats, such as capicola and mortadella, as well as a Mediterranean Collection sandwich with rotisserie-style chicken, feta and tzatziki sauce.