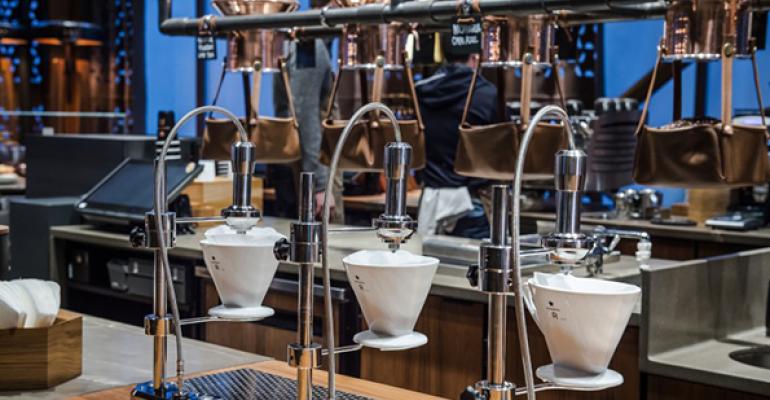 <p>Starbucks is focusing on their new Starbucks Reserve&nbsp;Roastery, which debuted in Seattle in 2014.&nbsp;</p>
News>Quick Service

The realignment of Starbucks’ senior leadership team this week is part of a long-term strategic plan designed to take the 24,000-unit coffeehouse chain into the next phase of growth with its premium concepts.

On Monday, Starbucks outlined some shifting positions among top management scheduled to go into effect Sept. 1 that will allow chairman and CEO Howard Schultz to focus on building the company’s newest emerging brands.

In a letter to employees, Schultz elaborated on the changes, which he said reflected the company’s attempt to “look around the corner” for Starbucks and move into a new era of innovation.

Schultz shined the spotlight on the Seattle-based operator’s new Starbucks Reserve Roastery, which debuted in Seattle in 2014. Two more locations are under construction in New York and Shanghai, and others are planned.

The Roastery showcases the theater of new brewing methods and micro-lot coffees in a Willy Wonka-like setting. In addition, the chain plans to open more than 500 new Starbucks Reserve locations, which Schultz described as a smaller cousin of the Roastery.

Both the Roastery and Reserve concepts will serve food by the recently acquired Milan-based bakery-café Princi, another concept Starbucks plans to grow.

Schultz said he will work side-by-side with Matt Ryan, executive vice president, global chief strategy officer, who has been tasked with looking for new growth paths for the chain.

Cliff Burrows, who is moving into the role of group president, Siren retail, will oversee global expansion of the Roastery and Reserve units, as well as the newly named Siren retail group. Burrows will also lead the growth of the standalone Princi brand, as well as Teavana.

The changes also put more day-to-day responsibilities in the hands of Starbucks president and chief operating officer Kevin Johnson, who has been with the chain for eight years, as head of the leadership team.

The 63-year-old Schultz, who appears to be setting Johnson up as a potential successor, said his daily collaborative relationship with Johnson will continue under the new alignment.

“My faith and confidence in Kevin is unwavering,” Schultz said. “A true servant leader, Kevin is culturally aligned with Starbucks, and I know how much trust and respect he has earned from all of you.”

Starbucks is also beefing up the retail side of its operation with John Culver taking the role of group president, global retail. As part of Culver’s team, Adam Brotman, the chain’s executive vice president, chief digital officer, will take on the added operational role of integrating digital technology into locations around the world, Schultz said.

The realignment of top management at Starbucks has been a fairly regular occurrence over the years. Schultz last announced a similar overhaul in 2014, when he also said he planned to step away from day-to-day operations to spend more time focusing on innovation, the store experience and the next generation of retailing and payment.

At the time, Troy Alstead was promoted to the chief operating officer position in what many saw as a succession move. Alstead, however, was replaced by Johnson when he went on sabbatical and then earlier this year officially resigned.