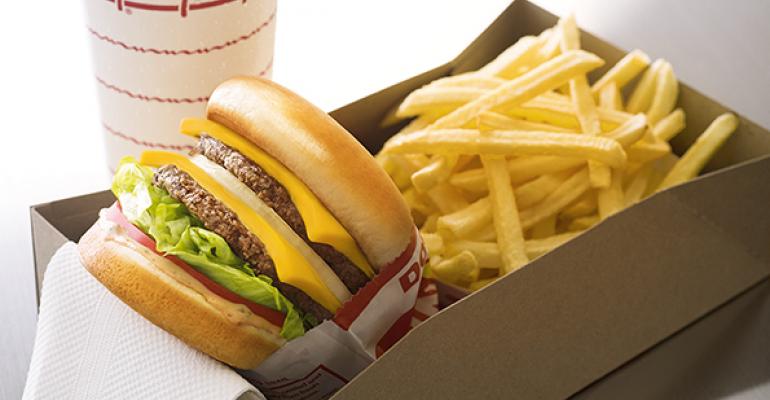 <p>In-N-Out is among the limited-service chains that maintains a narrow menu and high unit volumes.</p>
News>Quick Service

Quick-service restaurants take a bite out of menus

Offerings are getting leaner at several limited-service chains after years of adding products to menus.

McDonald’s Corp. spent much of the past decade adding products to its menu in a successful strategy that earned it among the highest unit volumes in the quick-service restaurant business.

3G Capital worked to mimic that strategy after it bought Burger King Corp. in 2010 and made several additions to the menu all at once. In 2012, for instance, the company added 10 new products to its menu in April, and in June launched several new limited-time offers.

But that approach wasn’t effective for Burger King. By 2013, the chain’s sales were falling. The company tried a different strategy, shifting toward fewer products that would each have a bigger impact. New products would be easier to create, so they could be made more quickly with fewer new ingredients. The result: Burger King’s sales rose in 2014, and in the first quarter of this year its same-store sales rose nearly 7 percent. The chain’s relationship with operators, based on interviews with franchisees, is as good as it has been in years.

The shift at Burger King is not all that unusual. After years of adding products to menus in an effort to remain relevant, quick-service restaurant chains have started cutting menu items to increase speed and efficiency.

In 2005, the average quick-service menu had 80 products, according to the Chicago research firm Datassential. By 2008, the average menu had 94 items. In the years since, that menu size decreased just about every year, down to 85.6 items on average in 2014.

The shift toward narrower menus is coming amid a demassification of the restaurant industry. Consumers are gravitating toward specialty concepts and away from chains with broader menus. And chains with broad menus aimed at large swaths of customers are ceding business to those specialty chains.

“Fast casual and new QSRs have very focused menus,” said Jana Mann, senior director of menu trends at Datassential. “They might be smaller in size. They focus on one item. If you want the best taco, or you want the best burger, do you go to someone that specializes in them, or one that has a general menu?”

Existing quick-service restaurants are responding by cutting menus or limiting menu additions to focus more on quality, speed and service.

“QSRs’ game is being upped,” Mann said. “They now know there is competition with these places and the whole industry is being elevated.”

Chick-fil-A, the Atlanta-based chicken sandwich chain, has all three dayparts, a menu that is half the size of McDonald’s, and unit volumes over $3 million per location. Plus, it’s not open on Sundays.

Raising Cane’s Chicken Fingers’ systemwide sales have grown 52 percent over the past two years, according to Nation’s Restaurant News Top 100 data. The chain based in Baton Rogue, La., sells chicken fingers — and that’s about it.

“Chick-fil-A, In-N-Out and Raising Cane’s have shown that if you have an exceptional product, people will come in with enough numbers that you don’t have to worry about the veto vote,” said Fred LeFranc, president of the consulting firm Results Thru Strategy, Charlotte, N.C. “Chick-fil-A doesn’t worry about people eating hamburgers.”

Another concept many people mention is Chipotle Mexican Grill. The Denver-based burrito chain has a simple menu — but is so customizable that it provides customers with enough variety to generate average unit volumes of $2.4 million without breakfast. Its operational simplicity has helped the chain get those volumes inside small stores.

The chain is careful about adding to that menu to ensure the simplicity remains. The company is currently testing chorizo as a protein for its burritos and tacos. But it will only add that protein if it brings in new customers or increases frequency among existing customers.

“If all chorizo does is take our existing customers and split them among additional menu items, that will be less appealing to us because that just means we have more menu items serving the same customers and that makes it more complicated and more difficult to serve all this delicious food,” Chipotle’s Chief Financial Officer Jack Hartung said on the company’s most recent conference call.

Chains often rely on adding menu items to attract new customers, or to eliminate the so-called “veto vote,” a phenomenon in which a member of a party “vetoes” a certain concept based on its menu. For instance, some burger chains will add chicken sandwiches to attract people who don't eat beef, or salads to get health-conscious customers.

Those veto votes are definitely out there, but LeFranc believes that chains are better off cutting from the menu and specializing in a few things. By being good at those few things, he says, chains can attract enough customers looking for quality to offset what is lost from the veto votes.

One such example is Steak ‘n Shake, based in Indianopolis, which in 2008 underwent a total revamp of its concept. The company cut its menu in half, reducing the number of pages from eight to four, so it could focus on its core products of Steakburgers, fries and milkshakes. The company gives that menu cut and the resulting simplicity of operations a lot of credit for why same-store sales have increased for 25 straight quarters — or every quarter since the change.

Complexity can slow service because workers have to spend time working on many different items. In addition, customers take longer to choose from broad menus, which slows down ordering.

The reduced speed is a huge concern in the fast food business that is, after all, about “fast food.”

This is why the Oak Brook, Ill.-based McDonald’s is considering potentially big cuts to its menu in the coming months.

The quick-service restaurant was the leader in the strategy of adding new products and venturing into new dayparts under its “Plan to Win” strategy adopted in the early 2000s as the chain’s sales struggled. The company over the years added new beverages, smoothies, wraps and snack items; McDonald’s also changed the chicken wings, added premium burgers and increased its dessert offerings.

That menu expansion worked well, to the point that other chains tried mimicking the strategy. “What happened to McDonald’s was that, as many accolades as [former CEO] Jim Skinner gets, most of this happened under his leadership,” said Dick Adams, a former McDonald’s franchisee turned consultant. “They continued to add products and sales continued to go up. Why would you stop?”

But after sales began sliding in 2012, the company came under fire from franchisees — and more recently some analysts — for the size of its menu that now totals nearly 140 items. McDonald’s has one of the biggest menus among major quick-service restaurants.

McDonald’s is currently researching how to cut its menu, according to memos sent to franchisees, and obtained by NRN. The chain is also studying a big reduction in the items listed in its drive-thru menu, which could act as a de-facto menu cut by only showing customers the most popular items.

To Adams, cutting the menu would help franchisees speed up service. Speed is a vital element to the chain, which is the second largest concept in the U.S. by unit count and has built its business based on speed and convenience.

“They should be the category killer on speed,” Adams said. “They’ve got the locations, they’ve got the convenience and they have the facilities and good drive-thru layouts. You should be all about speed. Everything else should be secondary.”

A shift to a more streamlined menu could also blunt moves made recently by rival Burger King, based in Miami, which has grabbed market share over the past 18 months by concentrating on operational simplicity.

Many franchisees love the idea of a smaller menu because a strategy that stresses simplicity makes it easier to add innovative new products that aren’t too complex for them to create. They can add new products and be fast.

“They’re very conscious about complexity,” said Guillermo Perales, whose Dallas-based franchisee Sun Holdings LLC operates nearly 300 Burger King locations. “If you look at the more successful concepts that have a lot of sales per unit, they don’t have a lot of products.”

Another chain keeping things simple is Arby’s. The Atlanta company has built sales with a series of popular, limited-time offers like the brisket sandwich, but features only items those that can be made mostly with existing ingredients. The number of SKUs at Arby’s is down from where it was two years ago, said CEO Paul Brown.

“We’re very careful about minimizing operational complexity,” he said, noting that the series of limited-time offers “creates this real sense of variety, but we haven’t had to add to our core menu on an ongoing basis.”

Still, cutting menu items is not easy. And some chains with weak sales might worry about angering customers by taking away a favorite item, even if that customer base is relatively small.

“It takes a lot of self discipline,” Adams said. “When sales are soft, that’s when your confidence is at a low point. And that’s a bad time to take things off the menu.”

Captain D’s Seafood Kitchen, Nashville, Tenn., has not cut from its menu to lift sales, making it something of an outlier in the current restaurant environment. More than a year ago, the seafood chain beefed up its grilled seafood items.

But the chain does routinely remove menu items. Before adding items a year and a half ago it first took some items away, so the number of total additions has been relatively small, Captain D’s CEO Phil Griefield said.

“It’s never an easy decision,” said Griefield. “You can have a low-mix menu item, and it doesn’t make financial sense to carry it in the restaurant. But someone is coming in to get that item, even if it’s just 1 percent of sales.”

Some items might fit with the chain’s menu strategy but don’t resonate with customers. Others could be small sellers but they lure customers or are add-on sales. “You have to do a lot of analysis,” Griefield said. “It deserves a lot of mix. You have to look at who is ordering it and why.”

This story has been changed from its original version to reflect the following correction.

Correction: Aug. 10, 2015: A previous version of this story misspelled the name of Captain D’s CEO.