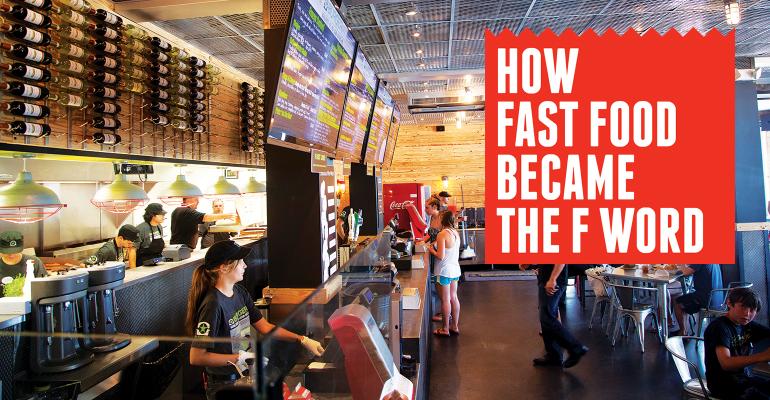 BurgerFi
The counter inside a BurgerFi unit
News>Quick Service

The question of healthful

The way many people, especially young ones, talk about fast food, you’d think eating it was both immoral and dangerous.

Why would you poison yourself with a fast-food Quarter Pounder with Cheese from McDonald’s when you could have a gourmet fast-casual BurgerFi burger?

Related: From the editor: The truth about quick service

Well, apart from the price difference, a Quarter Pounder with Cheese, at 530 calories, has 5 fewer calories than a single patty BurgerFi Cheeseburger, according to those chains’ respective websites, as well as the same amount of fat, 3 grams fewer carbohydrates and 3 grams more protein. All in all, either one is a manageable meal for a healthy adult, the biggest difference being that BurgerFi’s meat comes from natural Angus beef cattle that aren’t treated with hormones or antibiotics.

Fast-casual chain Chipotle Mexican Grill hangs its reputation on its “Food with Integrity” slogan, and it strives to serve food from animals that are pasture-raised and not treated with hormones or nontherapeutic antibiotics. But in a country in which obesity is arguably the leading public health problem, a meal there can be problematic: A fully loaded chorizo burrito with white rice, sour cream, cheese and guacamole weighs in at 1,550 calories with 73 grams of fat and 3,940 milligrams of sodium.

The U.S. Department of Agriculture recommends that adults consume just 2,000 calories a day and less than 2,300 milligrams of sodium.

Compare the nutrients of that burrito to something that might sound truly dangerous, like fast-food chain Taco Bell’s Nacho Cheese Doritos Locos Taco Supreme.

You could have eight of them and still be under the calorie count of that Chipotle burrito, which has 900 milligrams more sodium than those eight tacos combined, as well as 8 fewer grams of protein and 27 grams more carbohydrate (albeit 15 fewer grams of fat).

Yes, you can get a vegetarian salad at Chipotle with tofu, fajita vegetables, salsa and vinaigrette for 520 calories (but still more than 2,300mg of sodium), but fast-food restaurants have salad, too. Nonetheless, fast food is often seen as markedly less healthful than what can be found at fast-casual restaurants.

But these days, messaging around topics such as how meat is raised and where it comes from is important to a growing number of consumers.

The definition of healthful

Food historian Andrew F. Smith, author of the 2015 book “Fast Food: The Good, The Bad and the Hungry,” and a professor of food studies at the New School University in New York, said many of his students have no problem eating at Chipotle but would never deign to darken the doorstep of a McDonald’s.

Quite apart from the fact that fast food isn’t necessarily, in and of itself, any less healthful than fast-casual food, that wasn’t even a consideration when fast-food restaurants began to proliferate in the 1950s.

“It was so exciting,” he said. “You had to eat in your car. There was no indoor dining and they only had four or five items. It was such an exciting thing for Baby Boomers,” he said. “Now there’s just a different group of people, and the Millennials are not as excited by the things that excited us in the 1950s and ’60s.”

Health concerns began to emerge as fast food became an important part of many Americans’ diets, and public health advocates began to criticize fast food for achieving what, in fact, the industry’s mission was, to provide tasty, inexpensive food that everyone could afford.

At a 2004 conference of the Public Health Advocacy Institute, an organization based at Northeastern University in Boston with the goal of using legal tools to make the American food system more healthful, food addiction researcher William Jacobs of the University of Florida pointed to the dangers of food such as burgers and fries that were “energy-dense, highly palatable, very hedonic food,” which is to say high-calorie food that tastes good and gives people pleasure. Customers at Carl’s Jr. and sister chain Hardee’s can order All-Natural Burgers, below, made with beef from grass-fed cattle given no added hormones.

Meanwhile, consumer attitudes about what makes food healthful began to change as traditional approaches to dieting, such as counting calories, gave way to less clinical and more fluid interpretations of what was good for people.

A 2015 report by consumer research firm The Hartman Group found that consumers who were most engaged with their health connoted health and wellness with “being attuned and connected to mind, body, soul, relationships and the wider world.” In other words, buying sustainable, humanely raised and locally sourced food fit into their sense of well-being, as do “fresh, real, minimally processed foods.”

Many traditional quick-service chains have responded by cleaning up their supply chains. Most of the largest ones, including McDonald’s, Subway, Chick-fil-A and KFC have either gotten rid of chicken treated with medically important antibiotics or have committed to doing so.

Sister restaurants Carl’s Jr. and Hardee’s — with 1,163 and 1,848 locations, respectively, as of the end of last year — have introduced All-Natural Burgers, from cattle grass-fed and raised without added hormones or antibiotics, as an option for its guests.

Del Taco, a 550-unit quick-service chain based in Lake Forest, Calif., has changed a few things in its menu over the past few years, including introducing fresh avocados and carne asada, and

upgrading its queso sauce and removing artificial flavors and preservatives. But a lot of its change has been in its messaging, CEO John Cappasola told NRN.

He said he was surprised when he joined the chain in 2008 that each location prepared pico de gallo in-house, slow-cooked the pinto beans in the restaurants and grated cheese from 40-lb. blocks of cheddar. “We decided, let’s talk about that more and make it part of our value prop,” he said. Del Taco’s drive “to be a better fast-food restaurant” has earned it solid growth in same-store sales and traffic recently.

Cappasola said the chain had previously focused on competing on price, and had always scored well with consumers in terms of value, affordability and variety.

But in terms of perceived freshness and quality, they were on a par with other traditional fast-food restaurants, but “we were under-indexing quite a bit,” when compared with fast-casual restaurants.

That began to change with the “Unfreshing Believable” campaign that was launched in the spring of 2013, Cappasola and his team moved to reposition the chain by telling customers about all the work that went into preparing the food in-house.

“It helps us to break through and get the consumer to think about the freshness of our food and what maybe they thought about Del Taco before isn’t exactly the truth,” he said.

For the past three years the chain has enjoyed mid-single-digit same-store sales growth and has seen traffic increase for each of the past four years.

That’s a different approach from many new limited-service chains, which are trying to position themselves as fast casual, but Cappasola sees a demand for the fast, convenient food that traditional fast food promises.

So does Aaron Noveshen, a long-time restaurant consultant and operator who recently opened Starbird, which he calls a super-premium fast-food restaurant, in Sunnyvale, Calif.

With the restaurant, which focuses on fried chicken sandwiches, Noveshen is hoping to fix what he thinks is wrong with fast food, namely that the drive-thru isn’t is convenient as it should be and the service isn’t always that good.

But speed — the hallmark of fast food — is a priority for Noveshen. So the food is batch-cooked, not made to order, with the goal of being able to assemble every item in 90 seconds or less.

“That’s the line that we draw,” he said.

In what he says is an improvement on the classic drive-thru, Starbird guests can order and pay using the restaurant’s app and choose, once they tap on the app to say they’ve arrived, to have their food brought out to their car, pick it up or eat in the restaurant.

He said that by returning to fast food’s roots of convenience and simple menus, while bringing in modern perceptions of quality, he is hoping to pave the way for the future of fast food.

An earlier version of the story, based on information from the chain's web site, showed the burger having 701 calories, 41 grams of fat and 44 grams of carbohydrates, but BurgerFi said that information was incorrect, corrected their web site and provided new nutritional information. This story has been changed to reflect that.
1 comment
Hide comments
Related
Sponsored