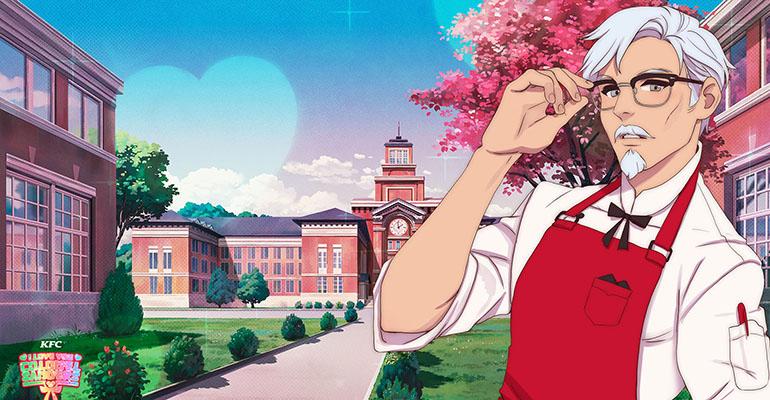 Do you want to date a stylized Colonel Sanders or maybe save the world from frozen beef with the “Queen of Clapback”? That’s right, quick service brands are now part of the gaming industry. KFC and Wendy’s have recently released games targeting the niche gaming market that’s growing in popularity for Millennials and Gen Zers.

Gaming culture has become prevalent in America within the past few years as evidenced by the rise of games like Fortnite, a live-action simulation game, and Settlers of Catan, a role-playing game.

Settlers of Catan is like Dungeons and Dragons for Millennials and Gen Z, easy to play around a table with friends but creative enough to build an imaginary world.

With Fortnite, gamers are playing with a lot of friends. The game has over 250 million users as of March 2019, according to creator Epic Games. That’s almost two thirds of the population of the U.S. Playing Fortnite has even become a career for some. In July of 2019, a 16-year-old won $3 million at the Fortnite World Cup.

Fast food and gaming aren’t a new combo, in fact, it used to be commonplace to receive a console game with a McDonald’s Happy Meal or a Burger King value meal in the mid-2000s used for either a handheld game or for use on an Xbox.

But these games from Wendy’s and KFC are most definitely not aimed at children.

Role playing games and video games are part of a new demographic that rose to fame on the internet. Players are able to compare scores and share memes about their favorite games. These communities and jokes are for those “in the know” who are up to date with what’s happening amongst their fellow consumers.

This now includes Wendy’s and KFC who are walking into two niche worlds with rabid followings; anime and role-playing games.

KFC’s game is called “I Love You, Colonel Sanders! A Finger Lickin’ Good Dating Simulator” and was created by entertainment company Psyop specifically for the fried-chicken brand.

You and The Colonel...

The game’s style is Japanese anime defined by female characters with big, doe-eyes and a plot for mature audiences only.

The games goal? To complete culinary school in the 3-day adventure and win the Colonel’s heart as well as his business partnership.

There is no shortage of promotion of the chain and its menu items in the game, including Mac ’n Cheese, a new menu item. There are cooking battles, actual battles and secret recipes littered throughout the simulation.

Try the anime version in the Colonel Sanders dating simulator, or the real life version for a limited time only now at KFC. pic.twitter.com/L6RTOTHI3Y

In 2015, KFC created an 8-bit Atari-style video game that took the player through the Colonel’s life as he attempted to become a lawyer and an amateur obstetrician and was heralded by the company as “historically accurate”.

That same year, Denny’s used their mobile app to make menu-inspired versions of classic Atari games, Asteroids, Centipede and Breakout, for their customers.

Where Atari games were perhaps trying to capture nostalgia from an older consumer, this anime-style game is clearly aimed at the current consumer.

Wendy’s has introduced a game too, but this one is decidedly low-tech.

Feast of Legends invites players to join Queen Wendy “first of her name, breaker of fast food chains, defender of all things fresh never frozen” to protect the borders of Freshtovia and help restore freshness to the realm of Beef’s Keep. She is also named “The Clapback Queen”,  a nod to the Wendy’s social media team that has famously had a clever comment for every situation brewing on social media.

Join the fight against the dark art of frozen beef. Our first tabletop RPG, #FeastOfLegends, is officially live! Download now for FREE.

From this point, players are invited to pick their powers form a list of orders that have assigned attributes and center around the elements of sandwich creation at the chain including “Order of the Beef” and “Order of the Sides”.

While all of the elements are based entirely around Wendy’s specific attributes, the rules of the game are identical to other role-playing games where there are dice to role and cards guiding the situations.

Things are about to get saucy. pic.twitter.com/MesmrkiQO3

This isn’t Wendy’s first entrée into game culture. The brand previously released an avatar in Fortnite with the same goal—saving the world from frozen beef. The character’s slogan was “Keeping Fortnite Fresh”.

In Fortnite, a multiplayer battle royale game, the Wendy’s avatar entered burger joints in the city and destroyed the freezers.

It was streamed on Twitch, the live streaming video platform primarily used by gamers to watch games live and speak to one another. Once the avatar’s rampage was done and she destroyed all the freezers, she left the game.

The advertising campaign around the character wasn’t traditional in that the live stream on Twitch was the campaign.

The campaign was low cost and deemed so clever that the character won the prestigious Social & Influencer Grand Prix at the Cannes Lions International Festival of Creativity.