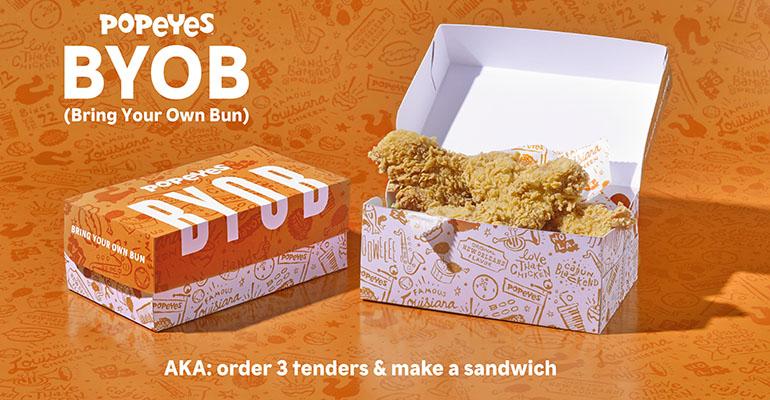 Popeyes says: ‘Bring your own bun’

Brand has a temporary solution for its chicken sandwich shortage

Popeyes looks to maintain the attention it received from its new chicken sandwich even while it’s sold out of the buzzy item.

Popeyes has released a new marketing campaign directing guests to bring in their own bun and make a sandwich. Guests are invited to order a three-piece tender and make the infamous sandwich on their own, without the original fixins.

Following the #chickensandwichwars of 2019, the chain is attempting to continue to cash in on the accidental infamy of its chicken sandwich with a new campaign. After debuting the chicken sandwich, every store across the country was sold out within two weeks.

This original sandwich was created in conjunction with the California chef behind #Popeyesgate where a chef was using Popeyes chicken on a chicken and waffles dish without informing customers. That was in 2017.

Two years after the incident, Popeyes added  a premium chicken sandwich with a brioche bun, sauce and pickles, to its menu.

It takes about 18 months to craft a menu item, get it on the menu, figure out supply chain and work on a marketing campaign according to Aaron Allen of Aaron Allen & Associates Global Restaurant Consultants.

Now that the chicken sandwich has sold out, the chain is attempting to maintain the buzz while working on a long-term supply-chain solution.

The short-term solution? A video campaign encouraging customers to make their own sandwich. The video shows various customers using any and all buns to sandwich its chicken tenders.

Popeyes traffic was up 218% over their previous July numbers according to Pacer.ai’s data analysis. Traffic continued to rise after the sandwich was sold out on August 27th with the last few days of the month continuing an upward trajectory.