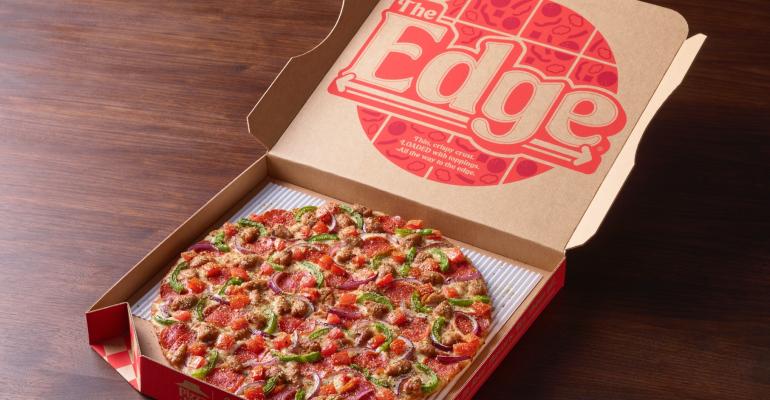 Pizza Hut
The Edge is an LTO available in four varieties.
News>Quick Service

Pizza Hut announced Tuesday the return of ‘90s favorite tavern-style pizza, the Edge, as a limited-time offering. The thin-crust pizza was first introduced in 1997 and uses Pizza Hut’s original “Thin ‘n Crispy” dough recipe and features toppings all the way to the edge of the pie, with no crust bordering the pizza.

The Edge uses a sweetened tomato sauce and a proprietary garlic and herb seasoning that’s only used on this pizza. The pie itself is cut into 16 rectangular “cracker-thin” pieces meant for sharing.

“The Edge is a pizza our customers constantly ask us to bring back. Anyone who loves thin crust pizzas loaded with toppings will love the Edge,” David Graves, general manager at Pizza Hut said in a statement. “The bold flavor and aroma of the Edge seasoning will instantly transport you back to a Pizza Hut.”

The Edge comes in four varieties:

All four pizzas are available for a limited time for $12.99 at participating locations, including the new Hut Lanes, dedicated digital pickup window at 1,500+ locations around the country, announced in March.