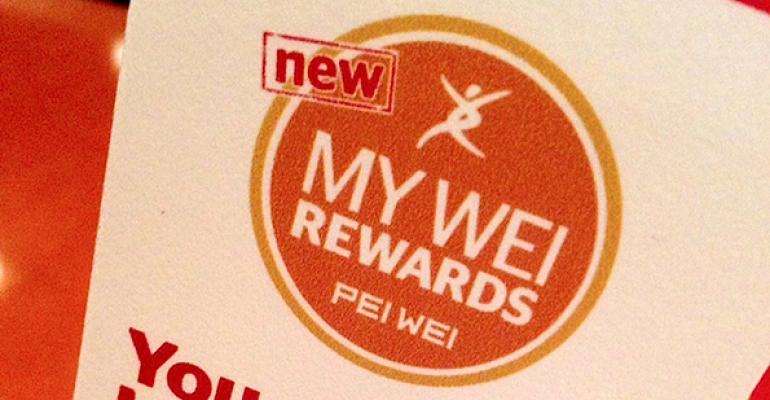 After its successful launch of mobile ordering and payment last year, Taco Bell is preparing to take the next step with a loyalty program designed to stand out from the crowd.

“It will have components that you’ve seen with other loyalty programs, but I think we can go one step beyond,” Niccol said. “The people who download our app are our biggest fans, so we want to do a little more than what’s traditional.”

Wendy’s is adding a point-of-sale system that will help facilitate mobile ordering and rewards. Already available at more than 2,600 restaurants, the full 6,500-unit system expects to have it in place by 2016. Earlier this year the company said it was testing a loyalty program in nine markets.

McDonald’s Corp. expects to launch a smartphone app later this year that could open the door to a loyalty program, especially for its high-frequency McCafé beverage platform, the company said.

Many large quick-service chains are also franchised, which can make adoption of a systemwide loyalty program a challenge, Bejmuk added.

However, the move toward mobile ordering and payment has made the addition of a loyalty program an inevitable — and seamless — next step for a growing number of brands, he said.

Starbucks Corp. is known as a leader in loyalty. The My Starbucks Rewards program has more than 10 million members and allows guests to pay in stores with their smartphones or pre-loaded cards.

My Starbucks Rewards will be fully integrated with the Seattle-based operator’s offer of mobile order and pay-ahead features to come later this year, along with delivery in some markets.

Fast-casual chains are increasingly adding loyalty components as they move to mobile ordering and payment. LYFE Kitchen and Smashburger both have programs in the works.

In April, Pei Wei Asian Diner launched a pilot of a “My Wei Rewards” program at restaurants located in Dallas–Fort Worth and Colorado. The chain plans to take the program national later this year.

Even convenience stores like Philadelphia-based Wawa offer app-based rewards programs that allow guests to pay in stores using their smartphones.

The competitive threat from both ends has forced quick-service players to get in the game, said Michelle Tempesta, head of product management for Newton, Mass.-based Paytronix Systems Inc., which develops rewards programs and helps chains track their effectiveness.

“You’re going to see something really interesting happening with the combination of online/mobile ordering and loyalty this year,” she said.

For customers, loyalty programs typically offer rewards, such as points toward free food or drink for every dollar spent or based on number of visits. Loyal fans might be given a first look at, or even an exclusive offer of, specials and promotions.

For restaurants, loyalty opens the door for collecting data on the buying habits and preferences of frequent visitors. Chains also have an opportunity for targeted marketing, the ability to reach out to guests directly based on previous purchases, or give a call to action if they haven’t visited for a while.

“If you visit my restaurant three times per week, and then you drop a day, the operator will know immediately there’s an opportunity to get you back and perhaps find out why you dropped that day,” Tempesta said. “You can see changes in behavior almost as they’re happening.”

Because of concerns about the discounting aspect in quick service, Tempesta said programs could be developed that give less in the way of discounts and more in the way of “surprises and delights” that engage guests but have less of an impact on the bottom line.

Gaming another way to engage

The key is to offer benefits that connect consumers with the brand experience, she added.

Paytronix, for example, is currently working with a quick-service brand with a unique target audience: one that is into extreme sports. The brand’s loyalty program will seek to build a community around sports like snowboarding or roller skating, with content developed to engage such fans, in addition to potential rewards.

Gaming is another way to further engage guests.

For instance, 37-unit Greene Turtle, a full-service sports bar chain based in Hanover, Md., recently added a game tab on its mobile app that allows loyalty guests to earn rewards by picking winners in upcoming sports events or by answering sports trivia questions.

Rewards include discounts, but the games also drove traffic, according to Paytronix, which developed the program. Guests that played the game visited 89 percent more often than regular guests, and spent 58 percent more, the company said.

However, some research indicates that loyalty programs may not have much of an influence on consumers.

Market research firm Technomic Inc., however, earlier this year found that 48 percent of consumers surveyed participate in more restaurant loyalty programs than they did two years ago, though there’s still plenty of opportunity ahead.

Tempesta said there’s no question that loyalty programs can have an impact.

“Loyalty gives you a very big lever to push to drive sales — and a knowledgeable lever,” she said. “It’s not just a broad email to members with a steep discount.”