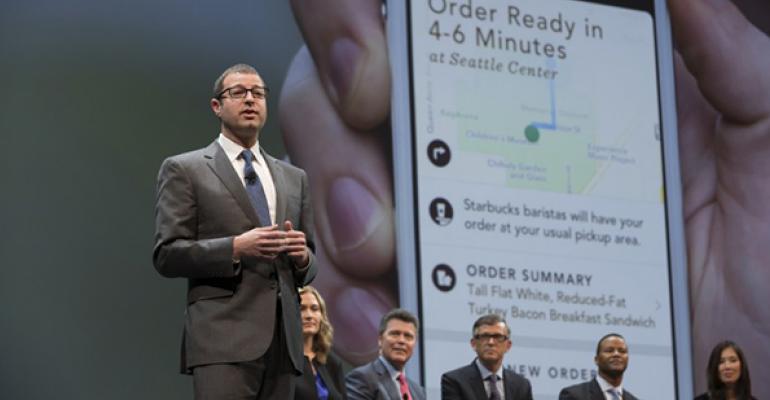 Starbucks Corp. will begin testing two formats for delivery in Seattle and at New York’s Empire State building in the second half of 2015, the company said Wednesday during its 23rd annual shareholder meeting.

The Seattle-based operator also outlined strategies to grow its current market capitalization of $70 billion to $100 billion. A major part of those strategies is mobile ordering and payment, which the company announced last year, along with the addition of delivery later, which were described by company officials as game-changers for Starbucks.

Aiming to serve “on-demand” customers, the pilot of third-party delivery will begin in the second half of the year in Seattle, with Postmates, which was selected because of its robust logistics technology, courier-enabled delivery and quality of service expertise, Starbucks said.

The pilot will let customers order and pay with Starbucks’ new mobile app, and have their order delivered within defined areas.

Mobile ordering and payment was first launched in Portland in December, and was expanded Tuesday to the Pacific Northwest and Alaska.

Before the end of 2015, the services will be rolled out to all company units across the U.S. and to Canada, and it will be piloted in the United Kingdom. A version of the app for Android will also be available.

Starbucks customers can use an app to pay in its locations now. The app is linked to the Starbucks Rewards program, which has more than 10 million members. Mobile spending has grown by about 50 percent over the past year, to $1.5 billion in 2014, said Sharon Rothstein, Starbucks’ global chief marketing officer.

Extending digital engagement is only one of seven strategies the company touched on during the meeting.

Here are some highlights of other strategies:

• Become an employer of choice. Starbucks has set a goal of hiring 10,000 veterans and military spouses. So far, it has placed 3,300 in jobs.

In an attempt to address unemployment among young adults, the company has committed to hiring at least 10,000 young people over the next three years. The company also set a goal of having 25,000 employees graduate college by 2025 through its College Achievement Plan, which currently has about 2,000 employees enrolled.

• Coffee leadership. For the first time, 99 percent of Starbucks coffee will be verified as ethically sourced.

• Growing unit count. Over the next five years, Starbucks will grow from 22,000 units to more than 30,000 locations around the world. This week the chain opened its 5,000th unit in the China Asia Pacific region, and will grow three times its size in that region by 2020.

• Create new occasions for customers to visit. Cliff Burrows, Starbucks’ group president of the Americas and Teavana, said the company will focus on the U.S., where it operates more than 14,000 locations and plans to add another 3,500 units in the next five years.

Growth will come from a number of formats, including new express units to come that will fit urban locations and new mobile trucks around college campuses.

The company is also expanding food offerings. By 2019, Starbucks expects to double sales of food by adding new lunch options and afternoon snacks, and expanding its Evenings menu.

Burrows said the company expects to grow its food business in the U.S. from 18 percent to 25 percent of revenue by the end of 2019, adding an additional $2 billion to the base business.

But Teavana is only in seven out of 66 countries where Starbucks operates, Young-Scrivner said.

In 2016, Starbucks units in Japan and China will convert to the use of Teavana-brand teas, which will double Starbucks’ tea revenue within five years, Scrivner said.

Beyond talk of growth, Starbucks president, chairman and CEO Howard Schultz devoted much of the shareholder meeting to race relations.

This week Starbucks announced a partnership with USA Today called “Race Together” that aims to spark a national conversation about race relations.

The program will begin on Friday with national newspaper inserts in USA Today and in Starbucks units, as well as a digital hub at racetogether.usatoday.com, to offer learning tools and conversation starters for Starbucks customers and employees.

For months, Starbucks has been hosting open forums in cities across the country to address race relations with employees.

During the shareholder meeting, Starbucks board member and finance executive Mellody Hobson urged the audience to be “color brave,” rather than color blind, looking for opportunities to create diversity.

Schultz said the effort is part of the company’s ongoing effort to balance profitability and social impact.

“Doing what is right for society and what is right for business cannot be mutually exclusive endeavors,” Schultz said in a statement. “Today, more than ever, companies such as Starbucks must use their resources to create opportunities for their people, as well as for the communities they serve.”