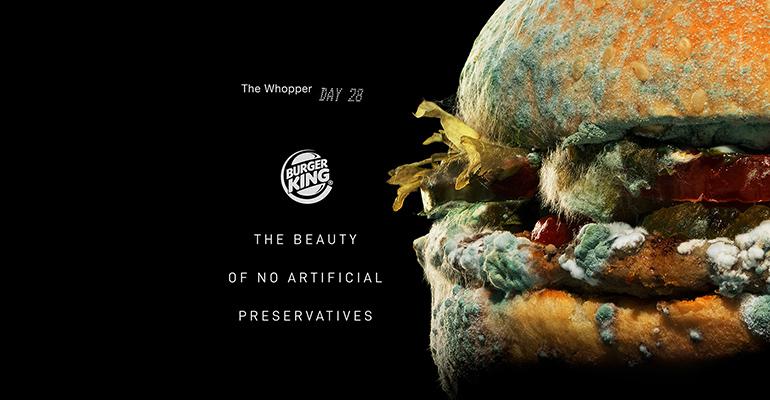 To stand out from other chains that have released clean menu items, Burger King is showing its iconic Whopper growing mold in video and photos.
News>Quick Service

The burger brand is joining Chipotle, McDonald’s, Panera and others and removing artificial ingredients

“At Burger King restaurants, we believe that real food tastes better. That’s why we are working hard to remove preservatives, colors and flavors from artificial sources from the food we serve in all countries around the world,” said Fernando Machado, Restaurant Brands International global chief marketing officer, in a news statement.  The moldy Whopper marketing campaign demonstrates how the new preservative free burger would fare if left out for 28 days.

Burger King is certainly not the first brand to try to clean up its menu.

Burger King’s biggest competitor, McDonald’s, has been removing artificial flavors from its menu items for years. In 2018, the company announced its line of seven classic burgers — the core of its menu — no longer contain artificial ingredients.

The trend in clean eating goes far beyond burgers, too. Panera Bread publicly vowed to do away with artificial ingredients and to only serve “clean” food by the end of 2016 and managed to meet its goal. Papa John’s also pledged to remove certain ingredients by the end of 2016, including artificial flavors and colors, corn syrup and corn syrup solids, hydrolyzed soy protein and corn protein, and sodium benzoate. For the past few years, Chipotle Mexican Grill has been removing artificial ingredients from its menu, and in 2017, the brand announced its menu has no added colors, flavors or preservatives.

To stand out from other chains that have released clean menu items, Burger King is showing its iconic Whopper growing mold in video and photos “to demonstrate the beauty of no artificial preservatives,” the brand said in a news release.