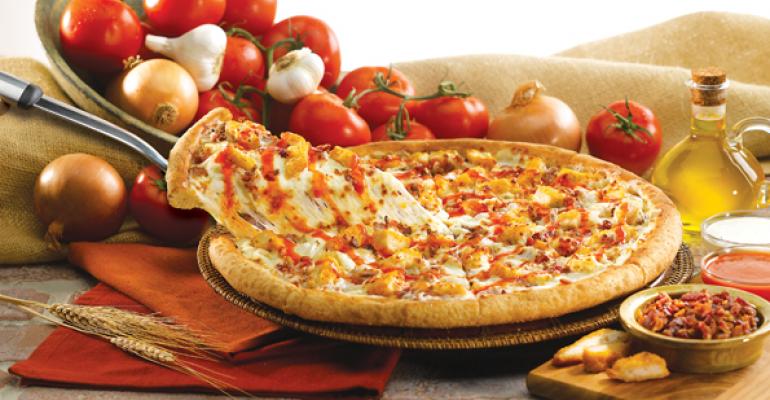 With a growing number of restaurant chains making public commitments to the quality of their food, the nation’s third largest pizza chain has released a list of 14 ingredients it has committed to remove from its menu items by the end of 2016. It also launched a marketing campaign that compares its ingredient list to Panera Bread and Chipotle Mexican Grill.

Papa John’s launched a website this week that lists itself, Panera and Chipotle as “leading clean ingredient brands.” It tallies the ingredients that it doesn’t have on its menu compared with the two fast-casual chains, which lead the industry in terms of reputation for sourcing ingredients responsibly.

Papa John’s also ran an ad in USA Today Thursday that made the same comparison. The ad is in the form of “A letter to the moms and dads of America,” from Papa John’s founder, chairman, president and CEO John Schnatter.

“I have a question for you: What’s your child’s favorite food?” it begins.

“I bet a lot of you would answer ‘pizza,’ right?

“We all love having those Friday night family pizza dinners. But you’re also concerned that your children are eating balanced meals and foods full of good, quality ingredients.

“Well, I’m a parent too (and recently a grandparent). Let me be clear about this. I’m not going to serve people in our restaurants things I would not serve my family at home.”

The ingredients to be removed include artificial flavors and colors, corn syrup and corn syrup solids, hydrolyzed soy protein and corn protein, and sodium benzoate.

Papa John’s has already removed trans fats, monosodium glutamate, and the preservatives BHA and BHT from its menu.

Panera Bread Co. launched a similar campaign last week highlighting “food as it should be,” which included newspaper advertisements in the form of a letter from founder, chairman and CEO Ron Shaich, who urged customers to “Demand transparency and cleaner menus.”

Chipotle has long used the tagline “Food With Integrity” to describe its sourcing philosophy, which includes purchasing meat from animals that are not treated with antibiotics. Earlier this year, it also said it would remove ingredients made from genetically modified organisms, or GMOs, from its food.

Other large restaurant chains have also recently made claims or commitments regarding their food sourcing.

Last year, Chick-fil-A Inc. committed to removing chicken treated with antibiotics within the next five years, and in March, McDonald’s committed to removing chicken treated with antibiotics that are also used to treat humans within the next two years. McDonald’s, the country’s largest restaurant chain, also said it would work to curb antibiotic use in other foods, including beef and pork, and to offer in its kids’ Happy Meals low-fat milk and fat-free chocolate milk from cows that had not been treated with the growth hormone rBST.

Earlier this month, Subway committed to removing artificial colors and flavors from its sandwiches, soups and cookies over the next 18 months. Earlier this year, Subway introduced reformulated, preservative-free roast beef and chicken breast.

In May, Noodles & Company, Taco Bell and Pizza Hut also made commitments to remove artificial ingredients from their menus.