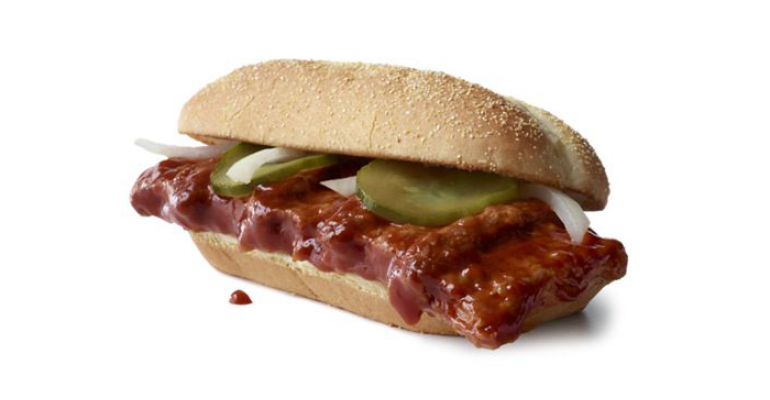 McRib to return on Monday

Perennial LTO to be promoted with Instagram story GIFs

The unusually ardent tribe known as McRib fans are in for a treat starting Oct. 7, when the beloved limited time offer is slated to return to McDonald’s locations across the country.

The sandwich of seasoned boneless pork in barbecue sauce topped with pickles and onion slivers on a bun will be at “more than 10,000 U.S. restaurants as early as Monday, Oct. 7,” the Chicago-based quick service chain said in a release Thursday. As usual, McDonald’s has not said when the McRib will vanish once again.

There are nearly 14,000 McDonald’s restaurants nationwide.

The sandwich last appeared in restaurants last November. It was first introduced as a regional LTO in 1981. McDonald's offered the sandwich nationwide for the first time in 2010.

This time, McDonald’s is promoting the return of the sandwich with 16 Instagram story GIFs that fans can post on their own stories. The GIFS will be available all year long.

“We’re always listening to our customers and we know the McRib has some of the most loyal fans,” Chad Schafer, McDonald’s USA’s senior director of culinary innovation and commercialization, said in a statement. “This year we’re excited to give every McRib fan new ways to show their love for the sandwich with our saucy McRib GIFS so they can celebrate the season no matter where they live.”

Participating locations can be found at mcdfinder.com.