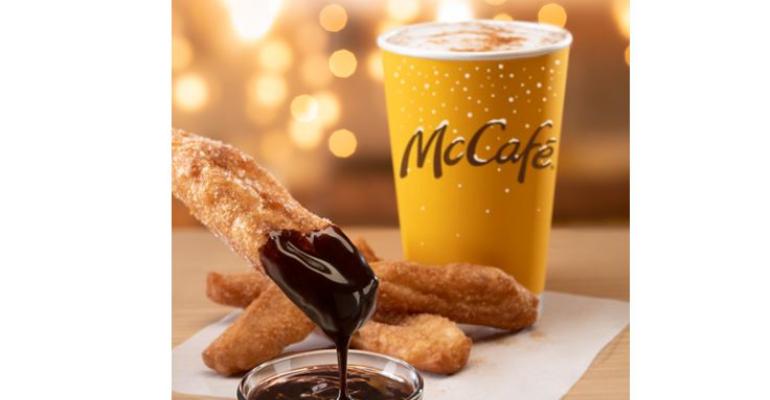 When it comes to holiday beverages, the McDonald’s McCafé coffee program has been going through a dry spell.

It’s been more than five years since the McCafé menu has launched a new seasonal beverage. That ends Nov. 6 with the debut of McCafé Cinnamon Cookie Latte, freshly brewed 100% Rainforest Alliance Certified espresso mixed with cinnamon and stirred milk. It is topped off with a sprinkle of cinnamon.

The new limited-time coffee flavor, available as a hot or iced latte beverage, will be served in new winter-themed McCafé holiday cups. The last seasonal beverage featured on the McCafe menu was a White Chocolate Mocha in 2013.

McDonald’s restaurants are also bringing back McCafé Donut Sticks, which will be paired with a new chocolate sauce for dipping when they return in November.

The McCafé Cinnamon Cookie Latte will be available for $2 for a small size on the $1 $2 $3 Dollar Menu. When the Donut Sticks debuted earlier this year (without the chocolate dipping sauce), the average price of the sticks were $1.69 for six or $3.29 for 12. The new LTO prices, on average, will be a $1.99 for a half dozen with one packet of chocolate sauce, and $3.89 for one dozen with two packets of chocolate sauce.

The new seasonal items come as the world’s largest burger chain has made attempts to upgrade its McCafe program amid fierce competition from Dunkin’ and Starbucks.

Two years ago, the chain added cappuccino, Americano and iced caramel macchiato drinks to the menu. Restaurants were also outfitted with higher quality espresso machines. Before that upgrade, the McCafé menu had been largely unchanged since debuting in 2009.

“After introducing a refreshed McCafé identity focused on brewing good, this delicious cinnamon lineup is the latest way the brand is helping customers embrace cheerful, feel-good moments,” the company said in a statement.

In August, McDonald’s introduced a redesigned logo and new packaging for McCafe, which debuted 10 years ago.

McDonald’s has dominated its quick-service rivals at breakfast since the 1971 debut of the Egg McMuffin.  But late last year, the chain said it was losing share at breakfast.