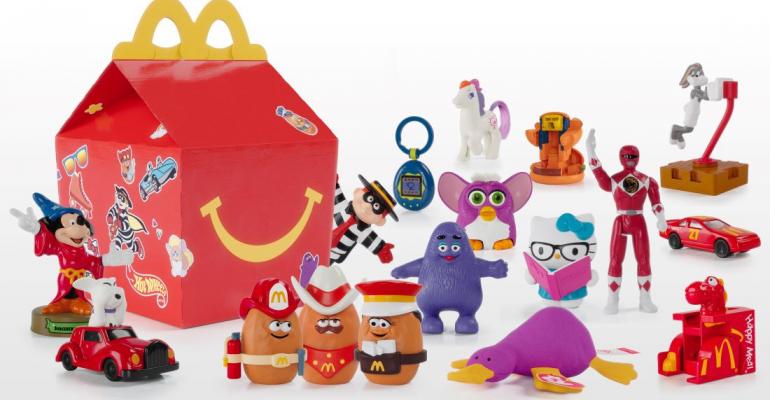 Is the next generation of McDonald’s Happy Meal customers ready for Furby?

That’s the hope as the world’s largest burger chain launches a Surprise Happy Meal promotion to celebrate the 40th anniversary of the iconic toy-stuffed kids’ meal.  Kicking off Nov. 7, participating restaurants around the world will be stuffing Happy Meals with one of 15 popular toys from the past. In the U.S., 17 limited-edition toys will be available including two Disney toys.

Other throwback characters include McDonald’s-specific toys like Grimace and Hamburglar, as well as Patti the Platypus (part of the Teenie Beanie Babies collection), Hasbro’s Furby and Sanrio’s wildly popular Hello Kitty.

McDonald’s said Patti is an all-time favorite Happy Meal toy that is “one of the most sought-after by collectors.”

“So, unboxing the Surprise Happy Meal together creates a real moment of bonding with their children. We hope these toys are something that they will treasure and remember,” Mitchell said in a statement.

Tim Powell, managing principal at industry consultancy Foodservice IP in Chicago, said the toy promotion is clearly a marketing play to boost guest counts as these parents have likely not eaten at McDoanld’s in a long time.

“It most likely is a ploy to get lapsed users back who've graduated to fast casual and second mortgages,” he said.

The promotion runs through Nov. 11 while supplies last.

The two Disney characters are exclusive to U.S. restaurants.

In 2013, McDonald’s developed five “balance lifestyle” goals for 2020 in partnership with the not-for-profit Alliance for a Healthier Generation. One of the goals was to promote only bottled water, milk or juice choices for Happy Meals. In January, McDonald’s said it plans to add a new Reduced Sugar Low Fat Chocolate Milk to the menu.