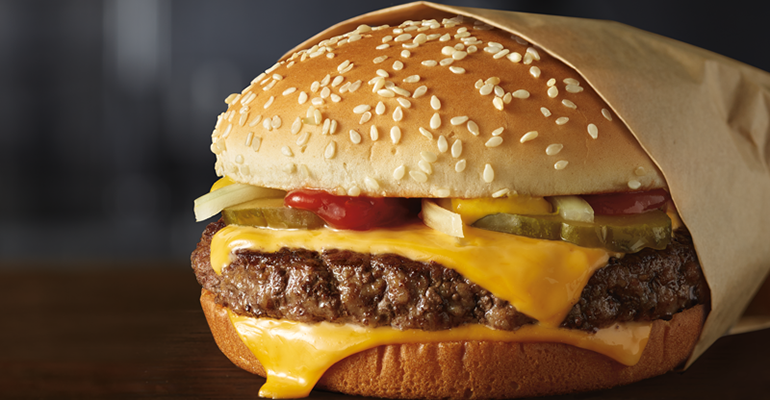 McDonald’s will serve fresh beef in 2018

Fresh beef quarter pounders will be cooked to order

McDonald’s Corp., in one of its biggest shifts in cooking procedures in years, said on Thursday that it would serve fresh beef Quarter Pounders, cooked to order, nationwide by mid-2018.

The move is designed to improve the chain’s quality, and its perception of quality, amid heavy competition in the domestic restaurant business — particularly from other quick-service restaurants and a growing number of fast-casual, “better burger” restaurants. The move, first reported on Thursday by the Wall Street Journal, follows a series of changes in the Oak Brook, Ill.-based giant’s operations, many of which overturned decades of company priorities.

That includes the 2015 introduction of All-Day Breakfast, and the company’s removal of artificial preservatives from several of its menu items last year. McDonald’s is also refranchising most of what remains of its company locations, and is rolling out a mobile order and pay app, with curbside service, in the U.S. this year.

This year, McDonald’s introduced new sizes of its iconic Big Mac sandwich and has tested Big Macs made with Sriracha sauce.

In addition, the company is planning to bring its kiosk-centered “Experience of the Future” concept into most restaurants in the next few years.

But fresh beef quarter pounders made to order might be the biggest change, in that McDonald’s has served frozen beef patties, prepared in advance and kept in a warming tray. “Over the past two years, we’ve made a series of bold, tangible changes for our customers,” Easterbrook said in a statement. “We are committed to transforming more aspects of our business, including offering a more modern and enjoyable dining experience, adding new levels of convenience and technology, and making more positive changes to the food we serve.”

McDonald’s is working to bring more customers in the door. The company told investors recently that it has lost 500 million transactions in the U.S. since 2012, and same-store sales have been lagging — including a 1.3 percent decline in the fourth quarter ended Dec. 31.

The company clearly believes improving quality will help win those customers back.

McDonald’s has been testing fresh beef in Texas and recently expanded that test to 325 locations in the Dallas/Fort Worth area, and in 77 restaurants in Tulsa, Okla.

The burgers to be made fresh include Quarter Pounder burgers, as well as the chain’s new Signature Crafted Recipe burgers.

Those tests are clearly successful enough that McDonald’s is ready to expand it nationwide. “We received overwhelmingly positive feedback from customers and employees and we’re proud to have been part of a test that is creating a watershed moment for McDonald’s,” Dallas-area franchisee Joe Jasper said in a statement.

The company also has support from suppliers, who will be tasked with bringing McDonald’s fresh beef, rather than frozen.

“This represents a strong partnership between McDonald’s, Lopez Foods and their other beef suppliers to support this initiative and deliver McDonald’s quality standards,” Ed Sanchez, CEO of Lopez Foods, said in a statement.