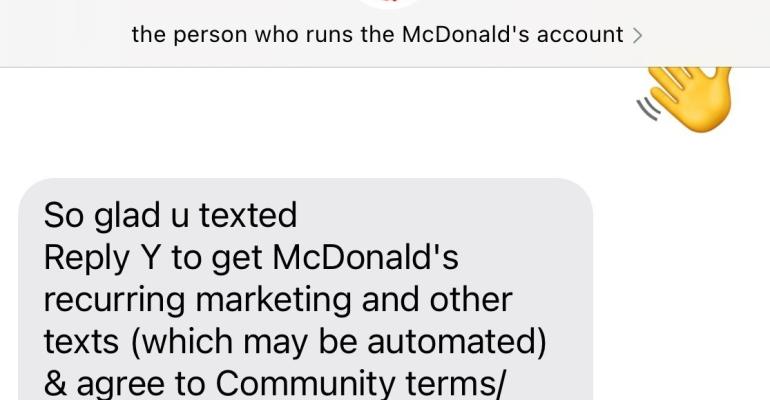 The company released a phone number via its social media channels for customers to opt into a new SMS campaign.

It happened Tuesday night during a mindless scroll of social media when I noticed McDonald’s channels, including Instagram, TikTok and Facebook, posted: “text me if u want in on a life-changing opportunity this is not a drill 707-932-4826.”

Why wouldn’t I want a life-changing opportunity? So, I texted the number, which led to an opt-in to receive McDonald’s “recurring marketing and other texts (which may be automated),” as well as an agreement to privacy terms and conditions. The automated messages continued, including the introduction, “hii it’s me the person who runs the McDonald’s account,” and a request to add the number to my contacts. McDonald’s also asked for my time zone, “so i don’t text you in the middle of the night lol.”

Brian from legal would frown upon that, the message noted.

The messages then alluded to the chain’s next “soft drop,” with a grainy photo clue. Surely this campaign will lead to much more than that, however, as text message marketing allows for brands to better personalize promotional offers, which increases the likelihood of conversions. Not coincidentally, McDonald’s executives have shared they’re working toward a more personalized messaging approach.

“You have to think about value in a very targeted way. I get excited about, particularly as we move more of the business to digital, is the ability for us to be much more targeted in how and where we deliver that value,” CEO Chris Kempczinski said during the company’s Q2 call in July. The company added that it is in the middle of an “evolution,” moving its value messaging from national to local and, ultimately, personal.

Notably, those of us who opted into this new SMS campaign have provided the company with our phone numbers, our time zones and permission for direct communication. We don’t have to be MyMcDonald’s Rewards members, yet the chain is still able to mine our data nonetheless and provide relevant messages to perhaps nudge us in the loyalty program’s direction. We’re already engaging on our phones, after all.

Of course, SMS marketing is nothing new in the restaurant space or elsewhere. Mobivity considers SMS text messages as its “legacy business,” for instance, with customers like Subway, Sonic and Rally’s/Checkers. McDonald’s itself has been tapping into text message marketing since at least 2016. What’s different now is way more people own a mobile phone – 98% of American adults – and way more customers engage with brands via their smartphone. Consider McDonald’s MyMcDonald’s loyalty program as an example. The program launched just last year and already includes over 25 million U.S. members.

According to Thrive, over 40% of consumers would rather receive brand updates via text now versus email. As such, SMS marketing is expected to grow by over 20% through 2025, according to Grandview Research, which cites SMS’ ability to eliminate paper costs and create a fast and convenient way to interact with “target customers.”

There’s also an added element of fun this time around – a tongue-in-cheek, conversational tone about “Brian in legal” needing to know our time zone, for instance, and a grainy photo asking us to guess whatever it is (no idea). Admittedly, the engaging banter led me down a deeper rabbit hole than I was expecting. I’m still not sure where this conversation is leading, but now I have some anticipation built up and that seems to be the whole point.

Mobile marketing is simply one lever in McDonald’s vast marketing strategy that has contributed to sales and traffic increases throughout the past several quarters. It’s an increasingly important lever, to be sure. During the company’s Q3 earnings call in late October, Kempczinski said a record mix of transactions are now coming through the mobile app.